“My friends used to laugh at me because I would cry every laundry day,” says Shell Fischer. “I lived in a fifth floor walkup in the East Village and my husband likes to change his T-shirt twice a day. I hated having to lug the laundry to the laundromat.”

Ask most people about going to the laundromat and they’ll cringe, moan or whine. “It’s depressing,” most of my friends say.

But coming to the rescue at a laundromat near you is the Dirty Laundry: Loads of Prose reading series, which runs about once a month at various laundromats across the city. The co-founders and hosts are Emily Rubin, Mistress of Laundry, and Gregory Rossi, Quarter Master.

As Rubin describes the series, “Storytelling reigns where the water meets the grime.” 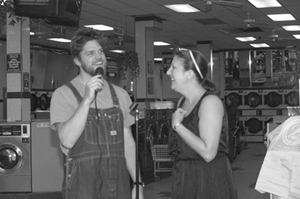 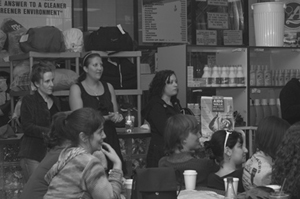 Rubin had wanted to do a reading series in a non-traditional venue for some time. When she and Rossi, a friend and fellow writer, met at a bar on Avenue C to toss some ideas around, Rubin looked down the block for inspiration: there was a bodega, too small; a church, too stuffy perhaps; and next door, a laundromat—which seemed perfect.

“Basically, holding a reading series at a laundromat appeals to my playful subversive nature,” says Rubin. “I take great delight in spontaneous social interactions. Laundromats are perfect for this. They are also warm and cozy.”

Growing up in Queens, Rubin used to do the laundry in the basement of her house. “My job was to put the clothes too delicate for the dryer on the drying rack. I always thought those collapsible racks were ingenious.”

And, as it happens, she had been wanting to use the name “Dirty Laundry” for many years. “One day I was in my therapist’s waiting room and on one of the couches was a pile of laundry. I imagine the patient had taken their therapist literally, but the idea struck.” With the new reading series, “it suddenly It found a home,” she says.

The first reading in the Dirty Laundry series was held at the laundromat on Avenue C and 5th Street, where Rubin is a steady customer. “I was a bit nervous about what would actually happen on the day of”—she says—“if they would keep us from coming in or forget that we were going to be there. When we arrived to set up, the owner wasn’t there, but the guy doing the night shift knew what was happening and even closed off a few of the machines in the back and had the customers use the washers and dryers up front.”

The turnout that night was strong to hear readers Legs McNeil and Sam Lipsyte. “It made me want to do more,” says Rubin. Caroline Dorwin, a writer and cartoonist, designed a Dirty Laundry logo and T-shirts, which were sold to help keep the reading series afloat.

Nine installments later, on a warm April evening, about 30 people gathered around on benches at the Atlantis Superwash on Atlantic Avenue in Boerum Hill to hear novelist Shell Fischer and poet Boni Joi read from their work for Volume 10 of the Dirty Laundry series, which is now funded in part by Poets & Writers and the Lower Manhattan Cultural Council.

From the front of the laundromat Rubin announced: “We’ve got quarters and laundry detergent for the people doing their laundry. We really appreciate you letting us use your space.” Arcade games beeped and flashed nearby, while some people lingered next to the vibrating Shiatsu massage chair, which actually gives a pretty good massage.

Journalist Shell Fischer, who recently completed her novel, The Joy of Mom (a play on The Joy of Sex), started off the reading answering questions posed by co-host Gregory Rossi—a Dirty Laundry Q & A tradition. “It’s like The Price Is Right!” said Fischer.

Launderers at the back of the room stopped to listen as Fischer read from her engaging and, at times, funny novel, which takes a look at the sexual revolution through the eyes of a 10-year-old girl in 1974. Next up, in eye-catching silver heels and leggings, Boni Joi warmed up the crowd with her laundromat poem, Espousing the Laundromat: “When things get chaotic, I do laundry/wash all that stress away.”

Each reader entertained the audience for a 13-minute cycle (wash, then dry), while Tobi Joi, a Swiss Precision rock ’n’ roller and Boni’s husband, kept the audience’s attention between loads with his electric guitar and homemade alphorn (a long plastic tube and empty plastic water bottle).

“I love laundromats,” said Sharon Mesmer, a Brooklyn-based writer who used to pen a column about doing the laundry. “There’s something so soothing about them. My husband works a night shift and he feels so comforted seeing this place is still open on the way home.”

At the end of the reading, those listeners willing to donate money to the Dirty Laundry series entered a raffle to win a laundry bag signed by the evening’s guests.

Though the reading was staged at the front of the laundromat, it was clear people who were there just to do their laundry were listening in, too. No one complained about the intrusion that night, but every now and then it happens, according to Rubin. At one reading a woman started screaming, “What are you nuts doing here? Go have your party somewhere else!”

“Some people just want to be left alone and get their laundry chores done. Some people see it as an imposition. And in a way it is,” says Rubin. For one thing, the language at a Dirty Laundry reading isn’t always clean. “Sam Lipsyte read a passage from his novel, Homeland, which was rather blue. A mother was there with her 10-year-old daughter. She took offense. I went over to talk to her and explained that I understood how she felt, but it was 10:30 at night and I did not think children would be there, and I don’t like to censor writers. I think she was fine after that, she just need to be acknowledged in the moment,” says Rubin.

But in general, Dirty Laundry: Loads of Prose has been receiving favorable publicity. I had the pleasure of airing my own Dirty Laundry recently in Williamsburg, reading along with author of Rain Village, Carolyn Turgeon. Reuters was there filming. Since then, Rubin has been interviewed on NPR and on the radio in Ireland, Canada and Great Britain. The Dirty Laundry series has also been featured on Russian TV and in newspapers in Australia, Poland and Holland.

Trying to explain the global appeal of the series, Rubin says, “Aside from being a quirky, unusual, somewhat subversive social and cultural phenomenon, I think the interest internationally also comes from a love of literature and storytelling, and that everyone can relate to our collective experience of having ‘dirty laundry’ in our lives.”

At the Atlantic Avenue reading, the Brazilian magazine-style television show “Uncommon Place” was on site. “Does the laundry spin the other way in Brazil?” Boni Joi joked.