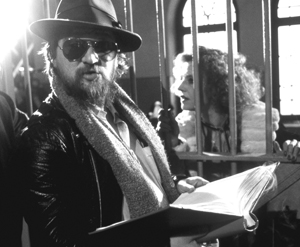 If 2006 was the year of Werner Herzog, then 2007 belongs to Rainer Werner Fassbinder. Herzog captivated American audiences with White Diamond and Grizzly Man—documentaries hypnotized by the exploratory drives of the human spirit in all its glory, hubris, and niggling irksomeness. Both directors show men striving above their capabilities. Fassbinder, unlike Herzog, does not depict the poetic beauty in folly. He leaves little room for his characters’ redemption. Their lives are dominated by bleak, claustrophobic mise en scene and their own despair, rather than a Herzogian awe-inspiring expanse of nature.

Fassbinder, who died of a cocaine and sleeping pill overdose in 1982, shortly after his 37th birthday, will not get to cash in on the critical re-evaluation of his fifteen plus hour magnum opus, Berlin Alexanderplatz. Fassbinder’s complicated and exhausting work is finally available for a new generation of cinephiles to savor. The Goethe Institute subsidized the restoration of the film claiming that the original negative was in “catastrophic condition.” Work began in 2006 and was completed in time for the 25th anniversary of Fassbinder’s death. The combined efforts of MOMA, Berlin’s KW Institute for Contemporary Art, and the Rainer Werner Fassbinder Foundation provide multiple avenues to engage with Fassbinder’s oeuvre.

MOMA presented “Fassbinder in the Collection” in April to commemorate their acquisition of a re-mastered 35mm version of Berlin Alexanderplatz. The series included sixteen films and two documentaries about the making and restoration of Berlin Alexanderplatz by Juliane Lorenz, director of the Rainer Werner Fassbinder Foundation. KW Institute for Contemporary Art concurrently mounted a sprawling exhibition curated by Klaus Biesenbach devoted solely to Berlin Alexanderplatz. Photographs of Fassbinder’s dog-eared, heavily underlined copy of Berlin Alexanderplatz, sketches and story boards, production stills and video-loops of selected excerpts from the film were all on view. The KW exhibition offered two possible approaches to the work. Berlin Alexanderplatz was screened in its entirety on a central screen in a small basement theater. Individual episodes were also screened on a permanent loop in fourteen different rooms. A massive catalogue with essays by Susan Sontag and Biesenbach, production stills, and a copy of the screenplay accompanied the exhibition. Süddeutsche Zeitung Cinemathek released a restored box set with six DVDs plus bonus materials for the European market. Criterion will release a domestic version with English subtitles by the end of 2007.

Fassbinder is perhaps the least accessible of New German Cinema, a movement of young filmmakers that spanned the 1960s through the 80s and was heavily influenced by the Nouvelle Vague and Italian Neo-Realism. Although a madman like Herzog and intensely personal like Wenders, Fassbinder lacks Herzog’s stunning cinematic style or Wender’s cynical romanticism. Fassbinder is as remembered for his flamboyant, drug-soaked life style and acerbic personality as he is for his Bundesrepublik Deutschland Trilogy (including The Marriage of Maria Von Braun, Veronika Voss, and Lola) and Ali, Fear Eats the Soul. The latter is a heart-wrenching fable about a cleaning woman in Hamburg who falls in love with a much younger Moroccan immigrant inspired by master tear-jerker Douglas Sirk’s All That Heaven Allows. With an economy of visual means and moments of silence that say as much as his dialogue, Fassbinder created a tableau as engaging and emotionally harrowing as Sirk’s Technicolor drenched melodrama and every bit as subversively camp. It is not surprising that Fassbinder, a portly, openly gay West German with proclivities toward deep, complicated, pseudo-sadistic relationships with his regular company of actors, built his reputation on the depiction of outsiders.

Fassbinder adapted Berlin Alexanderplatz from German Expressionist author and psychiatrist Alfred Döblin’s 1929 novel of the same name for West German television in 1980. The story follows Franz Bieberkopf, a Weimar-era everyman and his struggles to reintegrate himself into society. Emerging after serving four years in Tegel prison for the murder of his girlfriend, Franz is thwarted at every turn. Bieberkopf, played to sweaty, smirking perfection by Günter Lamprecht is a rootless drifter with, at times, incomprehensible motivations. He—like his nation—makes himself a lot of promises and doesn’t keep many. During the course of thirteen episodes and an epilogue, Franz reinvents himself as a shoelace salesman, Nazi newspaper peddler, small time crook, and pimp. Shot in rich, muted chocolate and grey hues by Xaver Schwarzenberger—the cinematographer of Veronika Voss and Lola—Berlin Alexanderplatz is the ultimate expression of many of the themes that Fassbinder—with a staggering 44 films to his credit—presented throughout his career.

While Berlin Alexanderplatz is far from perfect, Fassbinder visually translates Döblin’s literary style with remarkable ease. Fassbinder’s visuals and his direction of the actors reveal the tension of the double-man. His gestalt oscillates between the poles of restraint and hysteria and Fassbinder makes sure that the audience never forgets the artifice inherent in either. As is to be expected in a fifteen-hour-plus film, there is a hell of a lot of talking. Fassbinder does not mix it up Hollywood style with establishing shot, reaction shot, close up ad nauseum. For long durations, it’s either/or. Fassbinder depicts lengthy deliberations through medium shots from static cameras far from any action (often in another room if he is shooting interiors), or the director will hold a close-up reaction shot for so long that it ceases to be a glimpse into a character’s soul and instead further emphasizes alienation and despair. Fassbinder allows his characters wide emotional berth—within the space of minutes they can go from a perfectly normal conversation to laughing maniacally or screaming with their eyes bugging out of their heads. In Episode Ten, Bieberkopf caresses and talks to a table full of beers for nearly five minutes. However, Fassbinder always reels it back in. Berlin Alexanderplatz has several moments that reach howling, clawing emotional pinnacles, yet despite the naturalistic mise en scene, we remain aware we are watching a film. The camera pulls away to depict a static tableau of suffering, underwriting Fassbinder’s dichotomy of restraint and theatricality.

Fassbinder usually loses me when his characters freak out. Their psychosis works brilliantly, however, within the seedy, simmering life of Alexanderplatz, the heart of old Berlin’s nightlife, prostitution, and bars. The cabarets, half-naked whores, and barely restrained anxiety of Berlin between the wars are perfectly suited to Fassbinder’s metier. Many of his films are glaring incitements of German society—class issues, masochism, dominance—while paradoxically being funded by German public television.

32. (A six-story building on Cooper Square)

The year this painter and his wife, who is also a painter, move into their Cooper Square loft, he is hired by an art school in Philadelphia. Unwilling to leave New York, he spends part of the week teaching in Philadelphia and the rest of his time painting in his studio. He realizes early on that it is going to take him a long time to get his work to where he wants it to be.

We’re more committed than ever to keep the Rail free, independent, and above all relevant. Please join us to celebrate our 20th-year anniversary throughout next year in 2021.