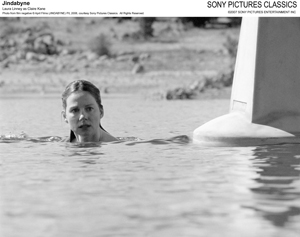 There was a time when foreign cinema meant dark themes, challenging plots (or non-plots), and haunting visuals—high art concerned with Big Questions more than box office. In recent years, however, this niche in America’s multiplexes has been largely taken over by a new breed of alien encounter. Kinky Boots, Calendar Girls, Amelie, The Full Monty, Chocolat, Brassed Off… some are entertaining, others barely endurable, but on the whole this new wave aspires to feel-good accessibility rather than emotional or philosophical depth.

It’s in the context of these films, and in particular the subset concerning the trials and triumphs of youngsters (Whale Rider, Bend It Like Beckham, Billy Elliott), that Swiss director Fredi Murer’s Vitus can best be appreciated. A major success in Switzerland and that nation’s official entry for the 2006 foreign language Oscar, Vitus is a movie about childhood rebellion against adult expectations that is itself exceedingly eager to please.

Vitus presents a couple who discover that their eponymous toddler is an early-blooming genius, able to play Beethoven sonatas and do complex mathematical calculations in his head with equal ease. The mother (Julika Jenkins) is English, and perhaps her foreignness is one reason she feels compelled to challenge Vitus’s Swiss school and push her high-IQ son. Another may be the haplessness of Vitus’s father (Urs Jucker), an inventor with Nixonian jowls whose fashion-oriented high-visibility hearing aids are not the money-making invention he’d hoped.

Vitus is played by two real-life prodigies, 6-year-old Fabrizio Borsani and, for most of the film, 12-year-old Teo Gheorghiu. Their acting is workmanlike but their piano playing is extraordinary; watching the poise and passion with which young Gheorghiu attacks the keys is one of the movie’s greatest pleasures.

Bored by school and vexed by his parents, Vitus turns for solace to his grandfather, a woodworker who dreams of flying and fits tidily into the category “eccentric,” subset “lovable.” He’s played by Bruno Ganz—best known for his hair-raising portrayal of mad Adolf Hitler in Downfall—with enough astringency to balance the saccharine.

Vitus isn’t much to look at, and the main character’s brilliance is not echoed in the writing or editing. However its set-up presents a bouquet of interesting themes: the struggle between adult and child over the child’s destiny; the ways children both see through their elders and misunderstand them; the tension between dreams and their realization; even the nature of genius.

Unfortunately, Murer is too keen to make us feel good to expend much effort on any questions of consequence. Vitus quickly devolves into a fairy tale, tossing reality overboard as it chugs busily toward happily ever after. The Hollywood Reporter’s prediction that Vitus will “play well in upscale North American specialty venues” seems certain to come true. Thousands of parents will doubtless hurry to the theater, their gifted progeny in tow, to imbibe the movie’s bogus follow-your-dreams uplift. Too bad, because the drama of the gifted child is a serious subject that deserves more attention in our pathologically child-centered time.

A tougher view of childhood and of life in general informs Jindabyne, Ray Lawrence’s ensemble drama set in the small Australian town of that name. Formerly nestled in a mountain valley, the town was flooded to create a man-made lake and its residents moved to higher ground. The remains of the old village lurking under the water prove to be a metaphor for the ghosts and secrets haunting the film’s characters.

American Claire (Laura Linney) and her Irish husband, Stewart (Gabriel Byrne), have emigrated to Jindabyne for reasons that, like many things in the movie, are left unspecified. The way the nervy Claire merely tolerates her husband’s stolid good-morning kiss but clutches her little son, Tom (Sean Rees-Wemyss), crying, “Who’s my main man?” tells us that the marriage is foundering. When we learn that Claire abandoned both husband and son shortly after the boy’s birth, returning only a year and a half later—again for reasons not spelled out—we see that her fervid mother love is fueled partly by guilt.

Stewart and three of his friends set off for their annual boys-only fishing trip along a high-country river. When they arrive at their favorite spot after an all-day trek they discover a murdered Aboriginal girl floating in the water. The next morning, rather than hike back to civilization and report the crime, Gabriel ties the girl’s ankle to a branch, to keep her from drifting off. The boys stay and fish as planned. When the four return home and inform the authorities a day later, they find themselves reviled by the Aboriginal community, the townsfolk, and their own wives, who can’t understand how the men could have acted so callously toward the dead girl.

Meanwhile, little Tom is under the sway of another child, whose mourning for her dead mother takes the form of increasingly dangerous rites of sacrifice. Claire, American that she is, finds the children’s antics disturbing and is infuriated by her Australian friends’ retrograde “kids will be kids” attitude. Claire has her own blind spots; her do-gooding efforts to reach out to the dead Aboriginal girl’s family are revealed to be as self-protecting and even hurtful in their own way as the white majority’s policy of pretending nothing’s happened.

The screenplay is based on a Raymond Carver short story that also formed a segment of Robert Altman’s 1993 Carver pastiche, Short Cuts. Some critics have complained that Lawrence’s version, written by Beatrix Christian, goes too wide, adding numerous characters and subplots that cloud Carver’s spare war-of-the-sexes story by mixing in dilemmas of mourning, parenting, and race. This might better be seen as one of the strengths of Christian’s elegant script, which manages to suggest vastly more than it says and points out that Carver’s macho minimalism, for all its beauty, can be a strategy of evasion.

For example, when Stewart discovers the body he is far from unfeeling; the horror and anguish that momentarily erupt out of him are awful to behold. Yet we also see what the sun on the water and the escape from the day-to-day means to him and the other men, and why they don’t hurry back to town. We see the depths of fear and neediness hidden behind the poker face they present to their families and their communities.

Lawrence has his own version of minimalism; he uses natural light and only the first take of each scene. In his hands the result is expansive, visually and emotionally. We can see that every character has a novel-length back story, even if we can only infer its details. The performances, even the children’s, are vivid and painfully real. I doubt I will ever forget Byrne’s moment by the river. The Australian landscape—the mountains, the desolate length of highway, the raw man-made lake, the little town’s earnest domesticity—is a character in its own right.

While Jindabyne doesn’t aspire to be high art, it’s an artfully made film that deserves credit for all that it does so well, including the way it sidesteps cheap tragedy and the predictable ending we long for. It reminds us that giving up what’s easiest and most comfortable can be the price of making things right and, sometimes, of making a good movie, too.

Mary Heilmann’s The All Night Movie

This book shows how connected many of her paintings are to specific moments, people, and places in her life. She uses words and images to trace her life from her early years in California to her arrival at artistic maturity in New York in the early 1990s.

Multiple generations of American anime fans have only been able to appreciate Mamoru Oshii’s beguiling art film in bootleg form—whether via imported home media or online links. But despite originally being made to go direct-to-video, this is absolutely worth catching on a big screen, in an environment where a viewer can be fully immersed in the movie’s gorgeous visuals and uncanny tone.