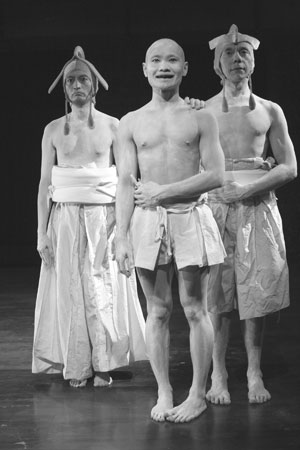 Last month, La MaMa Experimental Theatre presented an impressive dance festival celebrating their 45th year, and including the work of fifty- odd choreographers and companies. On the last evening of the festival, Inventors featured excerpts from two very different choreographers: Douglas Dunn and Christopher Williams who belong to different generations. Williams works with a deeply historical, researched imagination, using masks and elaborately conceived music. Dunn is part of the minimalist tradition of pure movement and has worked with Yvonne Rainer and Merce Cunningham before venturing out on his own in 1971. But this wasn’t the first time the two men have worked together—Williams spent some time as a dancer in Dunn’s company.

At La MaMa, Williams presented three excerpts from his longer piece The Golden Legend which is adapted from the book The Lives of the Saints. Set to an original score by Gregory Spears and live medieval choral music, The Golden Legend will eventually include Williams’ choreographic re-imagining of the lives of fifteen saints. (This is well-worn territory for Williams; his last project was Ursula and 11,000 Virgins, he studied medieval art along with dance and puppetry at Sarah Lawrence, and as a child he drew unicorns, studied the harp, and sang in a medieval choir.) Each of the three saints’ presented on La MaMa’s stage were distinctly and powerfully performed.

St. Francis, the first saint explored and the first piece presented, was a solo. It started with Williams walking upstage under a teepee of sticks. He emerged, dressed in a white loincloth of sorts: a strange entry for an even stranger series of dances. His movement involved tiptoeing, arabesques, long reaches to the ceiling and oddly angled poses. St. James followed along with a chorus of women with buns on their heads, dirty faces and movement that seemed zombie-like. This movement and energy in this piece had a Michael Jackson “Thriller” feel, there were dangling arms and syncopated breaths. St. Pancras rounded out the series of three saints with three men. One man represented the saint and the other two wore blue face paint. There was something off and indulgent about the way Williams staged the saints. An evening of fifteen saints would demand a lot from an audience as these three seemed to carry on a bit too long.

Douglas Dunn presented, and in many cases danced, six excerpts from his career as a downtown dance minimalist. All six were solos for men. The first piece seemed a duet between a man and a three-foot, wooden flat triangle. With an air of revery, the dancer lifted the triangle and often spun it around. Another piece—simple in execution—was only memorable for the seemingly endless pinwheeling of the dancer’s arms as the lights flickered out. But Dunn also tapped into his humorous side. He wore a grass skirt and unselfconsciously performed a blessed-out hula dance, much to the pleasure of the audience. There was even a line in the music about the moon, and Dunn unexpectedly showed his buttocks. It provided a much needed levity to the evening.

There was some whiplash involved in the evening—Dunn’s work was spare and echoey while Williams’ was lush with live music and theatrics. But in the end, both artists successfully emphasized character through movement and took the audience on a journey filled with personality and imagination.