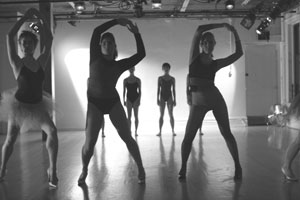 Michael Helland’s The Dress Up Show at The Chocolate Factory. Photograph by Steven Schreiber.

While waiting in The Chocolate Factory’s brick entrance area/art gallery for Michael Helland’s The Dress Up Show—starring Helland, Miriam Wolf, Stephanie Booth, Carly Pansulla, Anna Carapetyan and Daniel Linehan—to commence, I felt like a not-quite-cool-enough spectator hoping to get into an underground hipster club. After all, what Helland had in store for us was a full-fledged night out: he made us fabulous, provided food and drink, entertained with song and dance, and invited us to an after-party. Leaving the culminating dance party ninety minutes after my The Dress Up Show experience began, I felt like I was only slightly off-base.

The Dress Up Show commenced in the gallery. A girl in hot pants, a fuzzy vest, and heels started bootie dancing up the stairs, then performed a self-loathing monologue about why it’s hard to be as ugly as “… Monica Lewinsky, Rodney King after the beating…,” before explaining the evening’s premise: we “get to” dress up, take prom-posed photos, then go upstairs for a dance show before the party. Helland took our hands and led us behind the curtains to be dressed up in an assortment of costumes and accessories, ranging from a prom dress to a wizard cloak to 80’s track suits adorned with ski goggles. I was “angel white” in a crushed-velvet dress, gloves, fuzzy scarf wrapping my head like a halo, and red and gold glittered devil horns. I did feel pretty fabulous, and it didn’t hurt that my stylist, a cloaked and masked woman who took great pains to find something I’d love, kept telling me so.

Once dressed, we filed upstairs to the performance space where we drank punch and mingled. Three women repeated a short dance combination until everyone was festooned and seated. The extravagant audience members, each in an ensemble more ridiculous than the next, upstaged the dancers who seemed to be there less for movement is sake than for ambiance. Their movement phrases were simple manipulations of relevés, développés, rond de jambes and other relatively unremarkable movements, aside from the occasional gallop around the stage with clenched fists. Helland, in zebra leggings, white tulle and heels, took the stage, stripped down to his undies, put on a cardigan and sneakers—a naughty Mr. Rogers— and read silently “to set the mood.”

The staged portion of the show—a half-hour long— was relatively entertaining, but it lacked thematic cohesion. After touching each member of the audience, explicitly marking us as observers and participants, Helland performed much of the same movements presented by the dancers before. He then writhed and pranced naked in yards of purple tulle, serenaded us, and posed god-like with remote controls for colored lights. Four dancers rose from the audience to club dance, and perform short skits—the best of which was a musical number about being a robot—then stripped down to leotards to lie prone on a large tarp. Helland and an audience member rolled the girls up in the tarp while they screamed hysterically. Eventually two dancers crawled out and danced around before the others squirmed their way center stage to dry hump one another. An audience member—who previously read a poem about Madonna and Jackie O’—protested that it was “disgusting”, prompting the cast’s response: “Our Lord would not be happy with us,” a chant that degraded into a jumble of words. The show ended with the women thrashing around the stage-turned-moshpit.

Part of me—the dancer part—was disappointed by the uninventive movement vocabulary and lack of narrative thread. The work was certainly not a “proper” dance show, but I doubt Helland is concerned about properiety at all. The other part of me—the audience member— left feeling like a valuable aspect of something special. The artists wanted and needed me there, a true departure from the trend I see in other post-modern dance where artists exhibit what can only be described as disdain for their audiences. Thankfully, Michael Helland lies at the other end of the spectrum where the creation of a communal artistic experience is of paramount importance.