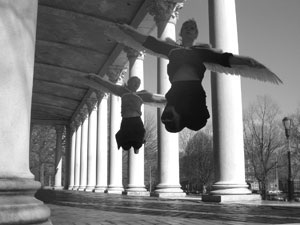 I love the true immediate nature of seeing live dance performances. Its fleeting quality heightens the experience, but it also makes it more susceptible to being forgotten. All that moves forward is the experience that was had by the incredibly different beings in an audience one evening.

So what happens when a dance artist stops making work? Does anyone notice? Does their artistic statement, like their art form, exist only in the minds of those who have seen their work?

Rosane Chamecki and Andrea Lerner, the brazen Brazilian choreographic duo known as chameckilerner, thrust this question in our faces in an applaudable staging of their own artistic funeral entitled, Exit at the Kitchen in May. Because after all, who else would do it?

Exit was set on a white marley floor. Not white as in blank canvas, but “the white of pure emptiness” says a “suicide” note cunningly printed in the program. Three video screens hung high through the stage space and two others clung to the walls next to the audience. Chamecki was projected on one side screen, Lerner on the other. Each sat in a white chair at a white table in a washed-out white montage. They looked at us and at the stage with adoration, changing positions throughout the performance.

Concept was far more prevalent than movement in this seamless package—this great adieu—which used filmed commentary from fellow dance artists and videos of Chamecki and Lerner as flying angels interspersed with choreographic sections from chameckilerner’s past 15 years.

The commentary was classic. Fellow dance artists such as John Jasperse, Sarah Michelson and Beth Gill along with chameckilerner board members gave documented reactions to this supposed career ender. These came with mixed emotion—Jasperse mused about the state of dance, Michelson alluded to a video of the duo reading their “suicide note”, and others talked about the concept of staging an artistic funeral. One board member referred to Chamecki and Lerner as heroes.

Dancers Erin Cornell and Caitlin Marz were mesmerizing as they executed chameckilerner’s inventive movement vocabulary set to impeccable scores by various artists over the years. They seemingly represented Chamecki and Lerner on stage. For people who know the duo’s work, the choreography in Exit was a retrospective of sorts, devoid of any sort of “greatest hits” feel. Instead, chameckilerner melded together choreography from different pieces in a way that created a completely new piece. I was delighted when I recognized bits of dance from work I’d seen before, which would then transform into something I didn’t recognize.

For those who are not as familiar with all of their work this was a great introduction—mimicked sex poses, face grabbing, and lip and ear manipulations are as common in chameckilerner’s movement vocabulary as deep lunges, beautiful leg kicks and intricate mind-blowing floor patterns. They’re also just as captivating. The odd becomes the extraordinary with chameckilerner, whose movement aptly tests the physical and mental relationships between people. In one sequence the dancers moved in and out of each other, pushing and pulling and kicking their way into a human kaleidoscope.

In the final scene, the dancers made faces in a varied range of emotions, tore at their skin and abruptly stopped. A ballerina and two black cats appeared on the screens. The charming bells of jewelry box music repeated as the ballerina pirouetted. Then, the dancers, the cats and the ballerina all walked off screen or off stage.

We saw a bright red curtain rise at the beginning of the piece, but thankfully it never closed.

The piece had humor—let’s stage our own artistic funeral—and in the same complex breath, it had sadness for all the uncertainties of being an artist making live performance work. It is unclear whether it was in fact a true artistic funeral for chameckilerner or simply a performance concept. Either way, it was brilliant.

“Please don’t ask what happened,” chameckilerner wrote in their supposed suicide note. “Trust us. We have made the right decision.” Indeed, in concocting this performance, they did make the right decision, and I’ll trust them with many more.

Carley Petesch is the dance editor for the Brooklyn Rail. She is also a dancer, writer and pilates instructor living in Brooklyn.