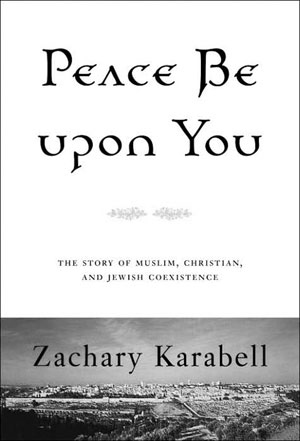 In the twelfth century, the time of Jihadis and Crusaders, there was a church built on the island of Sicily. It was constructed for the Norman king, Roger II. The artwork on the interior of the Cappella Palatina was unparalleled in the Mediterranean of its time, in ingenuity of form and symbolism and in its melding of styles, including Islamic and Byzantine. The multiculturalism of the Norman king’s principality does not go un-recognized on the walls; Latin, Greek and Arabic scripts accompany pictures of the Apostles, as well as white-robed Muslims with turbans, and Jews in traditional garb. One must wonder, upon entering this chapel, whether this place is earth or the heaven promised by Christ, or the heaven of Islam. These mosaics tell a strikingly different story from the narrative of the Middle Ages that we typically encounter, especially in our time of militant fundamentalism. Zachary Karabell’s Peace Be Upon You: The Story of Christian, Muslim and Jewish Coexistence, attempts to uncover what is missing from our history books, and our newspapers.

Karabell is a writer-scholar of the best kind, having composed a range of work from pop-history to a criticism of higher education. He is a thinker, yet his interest lies primarily in conveying knowledge. He does not sacrifice clarity for detail, or accessibility for an excruciatingly precise argument. From Peace Be upon You, I expected something like a true to life “West Bank Story” or a tale about the Copts teaching Muslims how to farm the Nile River Valley, but this book is much more valuable than a collection of feel-good anecdotes. It is a sweep through Mediterranean history from the time of Muhammed to the Iraqi war, carried by the essential narrative of a tranquil history punctuated by violence.

Usama Ibn Munqidh, a Muslim knight, dined with Templars and prayed alongside Christians at the Al Aqsa Mosque in Jerusalem. Saladin’s victorious “jihad,” which restored the city to Muslim rule, did not result in the expulsion of Christians, but rather an engagement between Saladin’s brother and King Richard’s sister. The result would have been—had the wedding taken place—an alliance between the two families, who would have ruled together over Jerusalem. Even during the times of the most intense conflict, there were the surprising bouts of intellectual exchange. War could not stop the caliph al-Ma’mun from sending an embassy to the Byzantine emperor “politely requesting treatises ranging from Euclid the mathematician to the physicians Hippocrates and Galen.”

What is understood to be holy war, according to Karabell, must have its roots in more than just religion. Religion is only part of the picture, a part grossly overestimated, for example: Crusaders. Karabell does not overlook the piety of the French knights who took Jerusalem in 1099; rather, he questions the religious identity of the enemy. The Muslims in the East were not expecting hordes of militant pilgrims; nor were the Eastern Christians who became the enemy in the Third Crusade. Pope Urban II made the notorious proclamation of “holy war,” not when Christianity, but when the power of the papacy was under threat. The holiness of a war could best be understood as a banner under which violence for more worldly reasons could occur—namely for rulers to expand their power. The soldiers could not have been so easily fooled, and there is evidence of fraternization amongst Christian and Muslim troops, especially in the Third Crusade between Saladin’s troops and those of Richard the Lionheart.

Karabell’s weakness lies in his quest for examples of coexistence in the present day. He concludes that a Saudi- and American-owned oil company represents a kind of cooperation. Aramco is vastly different than Muslims and Christians praying together under the same roof. When we look back at the Crusades we tend to see a struggle between opposing forces, a bloody mess. In fact, the coexistence then, though not complete, was far more civilized than business partnerships can be today. The walls of the Cappella Palatina recalla peace between faiths, perhaps somewhat beyond our comprehension. Today, the soldiers and leaders who disrupt the peace fight because they understand conflict between separate groups as inevitable, and because they fail to see the entire history, the precise story of how our forefathers clashed and, yet more often, coexisted.