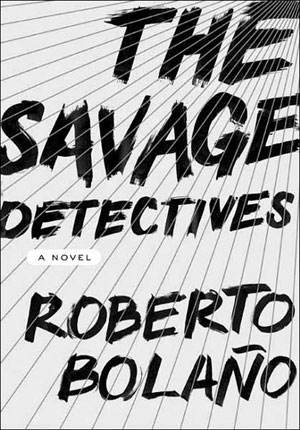 “I’ve been cordially invited to join the visceral realists. I accepted, of course. There was no initiation ceremony. It was better that way.”

Roberto Bolaño’s first full-length novel, The Savage Detectives, begins with the invitation to join a dying group of Mexican poets. First published in Spanish in 1998, the alluring novel has finally been published in English, translated by Natasha Wimmer. Bolaño, who died in 2003 in Spain at the age of fifty, is only now gaining in the United States the reputation that he has held for more than a decade throughout Latin America and Europe. Susan Sontag dubbed Bolaño, “the most influential and admired novelist of his generation in the Spanish-speaking world.”

The 577-page novel is written in three parts, the first and last being the stark journal entries of a young poet named Juan Garcîa Madero in Mexico, 1976. Madero is a know-it-all student who falls prey to the traps of young women and the admiration of the two main and mysterious characters of Ulises Lima and Arturo Belano (Bolaño’s alter-ego). Consisting of 400 pages, the second part is the bulk of the novel and uses more than thirty narrators; it is told over twenty years and crosses Mexico, France, Spain, Israel and Liberia.

The characters of Lima and Belano, the leaders of the visceral realist movement, are the main focus of the novel, but they never tell their own story. Instead, Bolaño carefully tells of their exploits through the eyes of the people that surround them. The achievement of The Savage Detectives is in its many narrators, including the Font sisters (who enjoy reading the Marquis de Sade as an instruction manual), Luscious Skin (the bisexual poet-at-large who gives a rank, four-page description of a sexual feat) and Amadeo Salvatierra (who is too old and too drunk to remember an earlier period when visceral realism began in Mexico).

Bolaño was a co-founder of the infrarealist movement in Mexico, along with longtime friend and poet Mario Santiago, on whom the character of Ulises Lima is loosely based. Although the novel takes from Bolaño’s real life, it is a work of implausible and at times, hilarious fiction. The characters are thrust into the most dynamic situations and stirred with vigor. Arturo Belano engages in a duel with a celebrated literary critic reminiscent of the famed duel between Manet and Duranty. Ulises Lima engages in a walk-off with Nobel Laureate Octavio Paz. Bolaño said himself that The Savage Detectives was a “love letter to his generation” and though there is a sensible tenderness throughout the novel, there is also a sentiment of imminent defeat.

With the publication of The Savage Detectives and next year the even longer novel 2666, Bolaño has, postmortem, gained a presence in the New York literary scene. Many are quick to compare Bolaño to the Latin American writers that preceded him, including Borges and Garcia Marquez. These comparisons are reaching. The Savage Detectives is not told with the academic prowess of Borges; it is far more pragmatic. It also does not shade its characters behind the scrim of Garcia-Marquez’s “magical realism.” The most difficult part of reading Bolaño is not searching for a place for his work to fit, but to carve an entirely new place for him.

The flashes of narrative, told through many eyes, allow the reader to get lost in the distinctly Mexican world of the visceral realists. It is here that Bolaño thrives. The Savage Detectives lives in a duality between feeling lost in the void, and the complacency of being at home in the abyss.