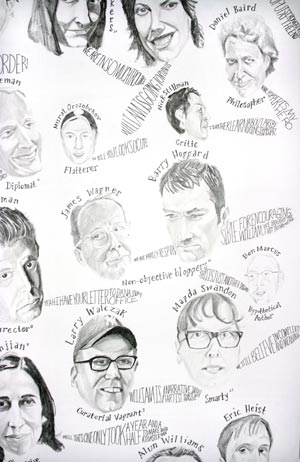 Not only does the emperor have no clothes, he’s bloated, vulgar, ignorant, complacent, and wallowing in historically unprecedented mountains of cash, with bile-colored spittle flecking the corners of his mouth. This being New York, we’re talking about the art world, and those mountains of cash intimidate and/or seduce most observers into biting their tongues and staying close enough to scoop up a few handfuls of green while the grabbing is still good. A few bitchy diatribes from “old school” critics are expected, even self-congratulatory in a soul-searching “success is so painful” kind of way. But only an innocent or a fool would be so self-destructive or naïve as to rip off his or her own clothes and prance, mince and mimic the “emperor” in a loudmouthed, over-the-top, piercing parody that comes just a little too close to being true.

Enter William Powhida. I first stumbled across his work a couple of years ago, noticing a set of drawings as funny as they were disturbing. Reminiscent of a graphic novel, the storyline followed a night of hard drinking, bar fights, hanging off the side of a moving car and eventually falling into a stupor and passing out. I took it seriously, having known guys who started down similar paths and came to bad ends (they’re all dead now) and decided to offer Powhida some big brotherly advice on sobriety. The story was a ruse.

Then I saw his video, “Persona,” a medley of twitchy alter-egos spliced together with jump cuts of all his various Williams, Bills and Wills whining about their jobs, their fears, and the shenanigans of the art world. That upped the ante.

Before his one-man show at Williamburg’s Dam, Stuhltrager Gallery in 2005, I stopped by for a studio visit and saw a work that in its ambition and commitment, elevated it into a realm I’ll call “meta-drawing.” Called something like “Everyone I’ve Ever Known,” it comprises a chronological diagramming of over three hundred small head studies of everybody but everybody Powhida could remember having known in his under-thirty years, a feat of memory that was not only artistic but psychological as well. It stretches out over eight feet and includes brief poetic texts paired with most of the heads, things like, “He was the first kid I knew who died. Cancer’s a bitch.” A project like this is the kind of stoner idea that lots of folks might have in the flush of a fresh buzz or after waking up on a particularly good morning, but most wouldn’t do more than just note it in their sketch books; who’d actually be dumb enough or have enough time to try it? See your bet and raise you.

Now with This Is A Work Of Fiction, we see the latest Powhida “persona,” a megalomaniacal “successful” artist, someone who has gorged himself on the media buffet of glamour and debauchery with all its titillating bombast, trendiness and extravagant vacantness and pukes a double dose of it back in our faces. This character, like a social transistor, is so attuned to the latest bullshit hype job that he amplifies its impulses and transmits its latest batch of absurdities like a dysfunctional rescue beacon.

There is no sparing of targets. In “The New York Enemies List” (2007), we’re served the usual “real world” suspects, including Donald Trump and Rudy Giuliani, along with a healthy dose of art world denizens like Zach Feuer, Bellwether’s Becky Smith, Dana Schutz and of course Dash Snow. Rumors have it that some subjects have taken umbrage at their inclusion and have gone out of their way to make Powhida’s life and career difficult.

In “The Bastard” (2007), Powhida creates his own version of the gushing hipster human interest story, the kind that was recently delivered about Dash Snow, a current lampooning favorite. Simulating a New York Magazine spread, the “artist” places himself on the cover between two naked models under the headline “Genius.” A hand-lettered facsimile of a celeb profile follows, running several pages and a couple thousand words with pull-quotes like “I want to destroy the art market,” and “I don’t have a circle. There’s not enough room. I AM THE CIRCLE.” To those who consume the daily art world media mix, the references and insider jokes are obvious. To those who actually have lives to lead, this level of self-absorption would seem comically absurd… but. For all of Powhida’s haranguing and clichéd “rich people suck” outrage, there is floating, just off stage, a creepy but all-too-human obsession of desperately wanting to join the “beautiful people,” to have the army of assistants, to have the Gagosians and Boones of the world fighting for his attention, in short, to transform himself from an actor into a player. Mixed into the Hogarthian satire, fitting of a twenty-first century “Rake’s Progress,” Powhida seems to be walking a razor’s edge, deriding the “avant-garde elite” to maintain his underground/outsider credibility while stroking the fragile egos of these very same people.

The “Notes,” a series of small drawings that depict pages of lists and ideas are typical. Rendered in an illustrative trompe l’oeil, the pictures show dog-eared blue-ruled sheets with yellowing tape and smudgy shadows, as if they were hanging on the studio wall. These notes, with their faux intimacy, are an abbreviated device that allows Powhida to delve directly into the wacky ego-driven self-consciousness behind so much of our celebrity art culture. “Things to Do,” “Proposals,” “Reasons” all seem normal until you read them and get smacked by a comically distorted worldview that is only partially a joke: “If you don’t BUY IT the person BEHIND you or the person looking at a JPEG will!” Though most of the punch of the smaller works comes from their textual rather than visual content, there is an effective melding of the two, though a more challenging painterly approach evidenced in the large colored panels wouldn’t hurt.

It’s been said that being an artist is like playing chicken with the speeding hundred-ton locomotive of obscurity. In the case of Powhida, we’re riveted by the spectacle of a guy with the pedal to the metal, and if things don’t break right, there’s going to be one hell of a crack-up, and a nasty stinking mess for someone to clean up.