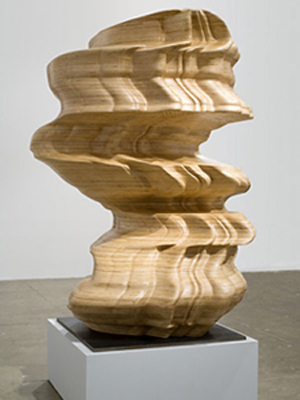 Tony Cragg is a British sculptor who has lived and worked in Wuppertal, Germany for thirty years. His honors include several major museum exhibitions, mostly in Europe, and representation of Great Britain during the 43rd Biennale di Venezia and the Turner Prize, both in 1988. In contrast to some of the more recent recipients of that prize, Cragg is willing to stick to his formal rhetoric as he describes his work as “a relationship with materials and things in the physical world without using preconceived notions of an already occupied language.” While his forms do not neglect content, his main concern is how they function in space, with a vocabulary of their own, rather than through a meaning that is superimposed upon them.

For more than a decade, Tony Cragg’s sculpture has focused on what he calls “Early Forms” and “Rational Beings.” In each case, these works look best when the individual pieces are seen in a kind of semiotic relation to one another. Fortunately, this is the way they have been presented in the two exhibitions I have seen of Cragg’s work at the Marian Goodman Gallery, in January 2004 and recently in May 2007. The current show acts as an extension of the previous one, celebrating the grandly spiraling, tornado-like motif that the artist calls “turning volumes.” These “Early Forms” are based on twisted flasks, canisters, and bottles, while the more varied “Rational Beings” transform geometric shapes into “self-enveloping forms.” Both motifs contain a certain linearity of development—what Cragg calls a “self-propagating, self-generative energy”—that is fundamental and inherent to the material.

Unlike the 2004 exhibition, however, the majority of these recent works are cast in bronze. This would include some of the most elusive, yet most provocative pieces, such as “In Frequencie” (2007) and “Mental Landscape” (2007)—both weighty, hyper-volumetric works based on sheer mass and density, in which encrusted fossil-like forms emerge in bitumen bondage. Yet, despite the concreteness of these forms (if we can call them by that name), one detects a lingering absence: the void generated by cultures struggling to identify their place and time amid the overflow of data. Observing these works, one may seriously question whether the race toward the future is finally catching up with the primordial past. As language deflates its own signifying power, Cragg seduces us with an irresistible return to origins, as if these origins were contained in some inchoate, unrecognizable blob, a preposterous organic dispensation. We might read these amorphous entities as black tar from the pits of abandoned oil refineries on the edge of Kazakhstan, where the surface of the Earth palpitates like wounded whales at sea. There is little to say other than to acknowledge the inability to unravel any sense from these whirlwind shapes and aggregates of putrescence.

At the conclusion of his book, “The Theory of the Avant-garde” (1968), Renato Poggioli asserts the future of the avant-garde would not be limited to history, but would be about artists’ persistent desire to experiment in relation to the most established forms of Modernism. As I read the forms of Cragg—which, in addition to bronze, include stainless steel, laminated wood and synthetic diabase—they embody an aura of experimentation, a chain-reaction where one idea lends itself to another, and then another. One of the truly great works in this exhibition is a two-part sculpture called “Digital Skin” (2006). Both parts are cast in bronze, but the viewer would be hard-pressed to know this without touching the stippled surface of this densely black-coated bipartite form, and even then it may be difficult to tell. Even so, the anthropomorphic tendency beneath the surface rears its head. There is nothing contrived here, merely intuited through work, observation, and patience. But there is something happening. There is something there. It used to be called mystery in the days when alchemy was still related to the process of how we conceptualize meaning in art.

Tony Cragg, who has been working since the 1970s, makes sculpture characterized by an effective diversity. In his show Incidents, currently on view at Marian Goodman Gallery, Cragg’s sculptures occupy a middle space between the abstract and the figurative; the extreme plasticity of his work results in forms that move back and forth between suggestions of a recognizable figure and sensuous abstraction.

While on a residency in Kettwig Germany, Tom Doyle spent a year experimenting with adding color to his work. It was a risky proposition, and as Kirsten Swenson writes in her introduction to the exhibition catalog, Doyle “did not expect [the] work to leave Germany.”

Which Europe Will Disappear?

On March 15, 2022, four European leaders made a long, hazardous journey by rail from Poland to Kyiv in a show of support as the city came under further Russian attack: the prime ministers of Poland, Slovenia, the Czech Republic, and Hungary met President Zelensky on that Tuesday evening as a curfew began in Kyiv. Afterwards, Poland’s PM Mateusz Morawiecki tweeted that Ukraine was reminding Europe what courage was: it was time for “sluggish and decayed” Europe to reawaken and “break through her wall of indifference and give Ukraine hope.