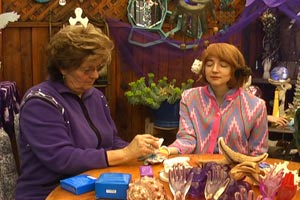 Shana Moulton doesn’t seem to be feeling well. Her wrists and neck ache from too much time on the computer. Her migraines are so painful she vomits on the floor. In fact she feels awful—anxious and depressed—spending days in bed or on her couch, obsessively kneading a fluorescent stress-pillow.

In the video series Whispering Pines, Moulton chronicles her desperate quest for relief from physical pain and negative thoughts. Through six hysterical episodes, Moulton turns to the promise, and products, of new age spirituality— trying everything to find a sense of peace and well-being. She buys a plug-in waterfall. She gets reflexology. She reads The Feeling Good Handbook, fantasizing about the book’s creepy author, Dr. David Burns. Wearing a neck brace, she even stiffly follows the moves of “Positive Moves,” an exercise tape touting the physical benefits of a cheerful state of mind.

Moulton does find a few brief, though unexpected moments of comfort. Her electric blanket springs to life and embraces her. She drinks a batch of Crystal Light, to a trippy, Alice in Wonderland-like effect. Each episode synthesizes performance art and animation, brilliantly achieved with low-fi video effects. Electric-blue tears zigzag down Moulton’s face as she cries in frustration. Robotic voices and a mystical Pegasus come into, and then spin out of the frame. Hot pink and teal furniture dresses the set, mostly confined to her apartment. Appearing frumpier than her 30 years, Moulton mopes around her surreal sanctuary in a terrycloth housecoat, with no apparent plan to venture out.

Yet, an Internet portal gives Moulton outside hope. A Google search directs her to “Healing Hands,” a new-age retreat in California run by Lady Nova, whom Moulton meets in a garden adorned with windsocks and dozens of plastic hands. The treatment Moulton receives is less alternative medicine and more make-believe, but she finally feels great. With her face painted like a butterfly—and newfound gratification—she tears off her clothing and runs into the woods, where her body joins with nature, dissolving into a hallucinatory kaleidoscope of spiraling rainbows. She stretches and spins her arms furiously, performing something like yoga but closer to “Global Groove,” and with exhausted, wide-eyed release, she collapses onto the grass.

Between its streams of synthesized music and therapeutic products, Moulton’s work could be seen simply as a send-up of spiritual salvation. Her videos are hilarious, largely due to her awkward, self-effacing and uninhibited performances, yet her candor lifts it above the merely comedic. Her crazy and embarrassing sashay through the woods is genuinely amazing—she casts off composure, dignity and reason to risk real vulnerability. It’s sweet and almost bewildering, notably different from the brash and impenetrable psychedelia of Pipilotti Rist. And it’s refreshingly far from the current trend of coolly referencing hippie utopia, by making, for example, dream-catcher sculptures “about” transcendence. As goofy and pathetic as her spiritual quests are, and as far-out as they trip into the After Effects cosmos, Moulton is not so much trying for transcendence as for the less-fashionable path to sincerity and self-acceptance.

Ultimately, the physical world proves too much for Moulton—as electric stimuli repeatedly disturb any serenity, her grip on reality slips. Her constructions are so stimulating, however, that they skillfully and purposefully distract from her darker themes of isolation and uncertainty. But when therapy and spirituality unmistakably fail to bring lasting peace, Moulton is left to create for herself an elementary lesson in idealism. In a pivotal departure, through a beautiful animation drawn like an old educational film, the painted butterfly lifts off her face and floats into a watery field. The butterfly blinks and hovers, leaving behind Moulton’s body and the clutter of the material world. It flutters over starfish, seashells and pine trees, searching for perfection, but settles on these natural forms of balance and stability.