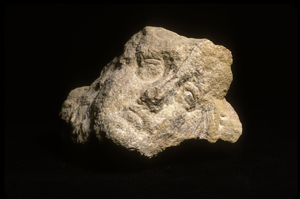 What stays with you, first and last, from Nicolas Carone’s carved stone heads is their blunt, incandescent beauty.

It is not a beauty that is easy to accept. The sculptures are nothing more than rude and rough fieldstones chiseled down to the essential elements of a face: eyes, nose, and mouth, maybe crowned with hair, maybe not. The carving is raw in the extreme, with hundreds of coarse chisel strikes stippling the surface like pockmarks. None of the pieces are dated; Carone picks up the stones from the grounds of his house in Umbria and chips away at them until an image emerges—he calls it “freeing the face”—a process that could go on for as long as thirty years. Perhaps it is this minimal intrusion on the material, or the stones’ direct connection to the turf of Italy, or Carone’s natural inclinations, but the sculptures exude an air of timeless classicism that is immediately suspicious to the contemporary eye.

Their simplified form invites every possible association or comparison: Roman portraiture, Michelangelo’s unfinished slaves, Rodin, Modigliani, Giacometti, Medardo Rosso, even the neglected Peter Agostini and his monumental doll heads. Are we responding to the work itself, or to the echoes of past art bouncing all over the place? Is their seductiveness attributable to nostalgia, or historicism, or archaicism? If that were the case, their beauty would inevitably come up shallow and dissolve into treacle. But the sculptures hold fast, yielding not to their antecedents but to the subtle assertiveness of their forms. They are round, square, diamond-shaped; some stare straight ahead, alert to what’s directly in front of them, while others seem to gaze inward, lolling on their sides with a dreamy sensuality that belies the roughhewn imperviousness of their material. They are creased and eroded, maculated here and there with rust stains and fissures; a crack runs down the nose of one that resembles a Greek theatrical mask, while another seems to have been dredged, barnacle-laden, out of the sea. Others are missing eyes or foreheads due to clefts in the original stone—elisions incorporated by Carone’s designs in a reversal of the usual interaction of art and time: instead of the ravages of time reshaping the object, the artist takes advantage of time’s scarifications to shape the object’s psychology.

Carone knew and admired Marcel Duchamp, and there is something of the readymade in his regard for the humility, timelessness, and inherent sculptural qualities of the stone itself. It’s as if the very ancientness of the fieldstone has guided the artist’s hand, shaping a head that’s redolent of the stone’s history, and our own. The sculptures’ hard and convincing beauty bears the weight of millennia but delivers its significance in the here and now. This is a very Italian experience—the conflation of the antique with the contemporary to create a third entity that transcends both—a sense of continuity in which the past is ever-present, like DNA or carbon microcrystals. It is a perception of the cycles of history and the fluctuations of human frailty, an awareness that Dante and Shakespeare and Goethe are alive in our politics and passions. Carone, who was born in 1917, has endowed these heads—brooding, apprehensive, resentful, exhausted, determined, ecstatic—with the perspicacity of his 90 years as an eyewitness to the eternally unfolding present: a compendium of emotion, experience and insight that they now carry into the future.

Eric Fischl: Towards the End of an Astonishing Beauty: An Elegy to Sag Harbor, and thus America

In the case of Eric Fischl, “psychological” means a painterly style works through a mental Gestalt process: instead of our eye completing a broken line as it would in a Gestalt experiment, it is our minds that complete Fischl’s works.

It started on a sunny day on a rooftop in Ebute Metta, after he impulsively went out to get a ten-foot-tall mirror. In front of it, he swayed from right to left, his arms outstretched, and posed; then he stood at attention, clamped both arms by the hips and posed; squatted and posed; pursed his lips and posed.

The story about how I became deaf is a story I tell often, because people always want to know what happened. It started when I was a year old, when I lost my hearing in one ear from a fever. Then when I was ten years old, in 1967, I was playing “King of the Hill” with some friends. I fell maybe fifteen feet, rolling over the ground, and when I reached the bottom of the hill things seemed strange: the commotion around me was silent. As I staggered around, the faces of my friends were anxious, and their mouths moved, but nothing came out.