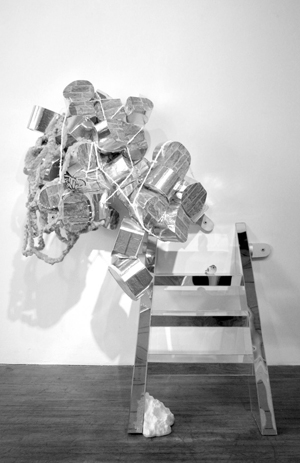 Bedeviled by its roots in conceptualism, installation art is seen as inherently more political than painting. In the 90s, any really tedious piece of Po-Mo dogma—what’s that, did I hear the words “Whitney Biennial?—was nine times out of ten three-dimensional. A countervailing aspect of installation streams directly from Joseph Cornell, in which self-reference and nostalgia access a sort of sacramental fragility, every work is an altar. A chaotic room installation by Pippilotti Rist I saw some time ago, involving an old chair, a TV and a collection of detritus, evoked a map of someone’s mind, like Cornell’s project writ large and messy. Japanese installationists in particular like to play with the tactile possibilities of familiar materials—rope, webbing, dirty laundry—taken to fetishistic extremes. Yet a lot of contemporary artists still seem ambivalent about installation that has no didactic or conceptual content, as if, because these works are assembled rather than “made from scratch,” it is not enough that they derive from observation and experience.

As an example of this bind, works by Melissa Pokorny at Front Room Gallery, which could stand on their own formally, strive after a conceptual syntax, a puzzle-like decipherability. Pokorny takes photos of stone masonry, wraps them in metallic paper so they themselves become “stones,” and agglomerates them in clusters or bundles. She drapes them with netting or rusted chains, binds them with yellow rope, adds statues of animals representing iconic cuteness, like dogs, bunny rabbits and deer, and sometimes on top of it all plunks a plastic cup or two of fluorescent goop. (The first one I saw, perched on a sculpture sticking out of the wall, I mistook for a cup of Tang left over from the opening). The sculptures are small-scale, with the dimensions and something of the feeling of a suburban lawn montage. To this idea she adds an anthropologist’s detached admiration of human silliness, and perhaps a simultaneous hatred of our bungling, guided by an aesthetic intentness that, like Cornell’s, is both a form of collecting and of creating.

While fiercely visual, the works reference humankind’s manipulation of—well, “nature,” I guess, (the only word I can think of that could encompass both stones and animals)—in a way that is neither annoyingly obtrusive nor yet very intriguing. There is an awful lot of art around right now that comments on this relationship. Probably it is only natural—ha ha—that there is, given the speed with which our misunderstanding of our world may be sending us to our endgame. I am not against “thinking” about hot-button issues creatively (okay, maybe a little) but it’s very hard to do well, and few art objects have ever changed a single opinion about anything except art. Looking at Pokorny’s show, it’s clear that the strength of the works is not in the message encoded in them. Rather they are defined by the starkness of their materials, chrome-like surfaces, glop, photo paper: a “comment,” on sensuality wrought from ugliness.

Hand-written, rough, colorful, sentimental, or DIY, yet indicative of a complex concept-driven interior thought process not fully compliant with an aesthetic or formalist framework, one that is indicative of traditional “art”: these are the calling cards of “wet conceptualism.”

You either start in darkness, or you start in the light. One is not better than the other, but the choice is the first one that affects your experience of the Whitney Biennial. The show spreads out across multiple floors, but it mainly takes place on two: one is designed like a labyrinth, the other as an open field. It’s a dramatic shift. In the labyrinth your eyes can’t travel far; in the open field there is almost nothing to stop them.

The Newhouse Center for Contemporary Art at Snug Harbor Cultural Center is part of a vast, venerable, and somewhat unruly complex on the northeast shore of Staten Island. Melissa West, the director of the Newhouse, zoomed in on the site’s history to curate Roots/Anchors, an engrossing, multi-layered exhibition currently on view there.