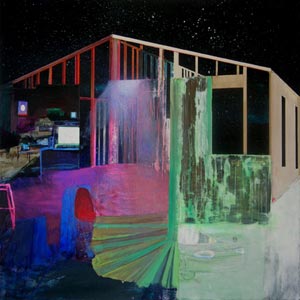 There’s something immediately familiar about Kristen Schiele’s cycle of paintings at New General Catalog in Greenpoint: fragmented, architectural interiors scrubbed into medium-sized canvases with stylish, tongue-in-cheek recklessness, and enveloped by kaleidoscopic color schemes resembling a Black Forest fairy tale cloaked in moonlight. Her dreamy, visionary treatment of architectural space is matched by a resolute sense of composition that pairs folksy expressionism with a clinical facility for manufacturing eerie, otherworldly drama. In short, her paintings feel German.

My initial assumptions were corroborated when I learned that Schiele lived and studied in Germany for years. From The Sorrows of Young Werther and Caspar David Friedrich to Tim Eitel, German artists have a rich history of crafting hallucinatory atmospheres inhabited by sensitive souls pitted against cosmic forces. Schiele’s take on the legacy of Sturm und Drang drops its angst-ridden souls but retains its brooding landscapes. She baldly states her Teutonic leanings in “Dusseldorf,” in which she has prominently hand-lettered the eponymous German city’s name in the painting’s upper register. Her predilections may be pronounced, but they aren’t rare; the Leipzig School and its elder statesman, Neo Rauch—one of the craftiest magpies of the German tradition—have become beacons for young painters.

Schiele’s work mines the psychological aspects of this storied tradition with a noticeable American accent. Since it is a tradition that embraces both the analytical and the wildly romantic—formalism came out of Germany and so did Goethe—Schiele performs an agile balancing act between the poles of this cultural schizophrenia. Two paintings in the show are pulled off flawlessly. “The Game Room” initially appears to be a house foregrounded by skeletal Caspar David Friedrich trees before a moonlit forest that seems partially swallowed by a Richard Diebenkorn Ocean Park painting. The abstract margins of the piece are built of a nervous, directional thatch of brooding blue brush marks. The roof of its shadowy cottage is echoed by a crisp angular mark in the upper left that functions simultaneously as an abstract line and a dislodged portion of the house’s roof. This odd object serves to deepen the pictorial space around what initially appears to be a scribbled overlay. You can tell every one of Schiele’s moves is carefully considered, but you’re hard-pressed to resolve its painterly chronology.

“Hoop 43” also tackles architectural space head-on, and architectural space leaves the field limping. A basketball hoop hangs over disjointed swaths of paint, which anchors the image spatially and psychologically, transforming what seems like an abstract melee into a suburban driveway perfect for entertaining neighborhood kids in an idealized subdivision. Banal domesticity mixes with the anxious perfection of Schiele’s clever paint handling and formal treatment of space.

Like the camp to which she is clearly indebted, Schiele is an adept painter, possessing the necessary skills to carry out her ambitious moves. Paintings such as “Simulation House” and “Yale Club” are puzzling and hard to get your concrete mind around. The sole exception is the previously mentioned “Düsseldorf,” which reveals a little bit more than it needs to. But it’s a tiny hiccup in an otherwise consistent and successful show. Art criticism has a paradoxical relationship with the concept of antecedents; it prizes originality but its criteria for what works is based on past examples. Kristen Schiele’s work might be unmistakably allusive, but it is also unmistakably good. If you’re going to look to established precedents to make your work, look to successful ones, do it with class, and make them your own.