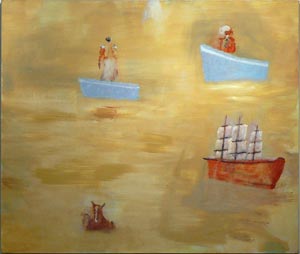 “Desire for Transport,” the title of one of Katherine Bradford’s recent, breakthrough paintings, evokes the dilemma of painting and, to some degree, all art in a nutshell. Unless we are still clinging to formalist or literalist biases, we want to be transported, be taken somewhere that is transformative, even if only briefly. In “Desire for Transport,” a flotilla of seven boats floats calmly on a blue green sea flecked and striated with reddish orange, turquoise green, yellow, and pale blue streaks of light. All the brushstrokes are abstract, and it is out of them that the images arise. In six of the seven boats, there is a brightly dressed, overly tall figure—much too tall for the boat—standing or rising into the air (it is impossible to tell). The torsos are tangible, while the lower part of each, draped in a gown or robe, is a veil of luminous color. The various figures (are they on stilts?) seem to be wearing a crown, a wizard’s conical hat, a bejeweled bridal veil, and a star.

We can’t figure out exactly what is going on. The longer we look, the more suggestive Bradford’s abraded brushstrokes, dabs, irregular patches and scumbling become. It’s as if we have entered a trance-like state that is similar to the one possessing the figures in her paintings. Bradford knows her medium well enough to trust it, and, more importantly, to let her marks become evocative without nudging them into an easily definable realm. At times, I see black figures in regal attire. Other times, I see veiled brides. We investigate the small differences distinguishing the figures, look at them closely as if this might unlock their secret. It is a kind of looking that rarely happens in painting. The seventh boat, which floats empty on the horizon, hints that even the artist doesn’t know everything about the painting, that there is something there which she herself cannot begin to name.

In “Men in Bay,” seven naked men stand in a very calm, nighttime sea (or is it a lake whose shoreline is not visible?). Behind one of them is a sailboat, whose scale doesn’t seem right. If one of these men stood up in the boat, he would likely be taller than the mast. This discrepancy animates the painting further. As with “Desire for Transport” and many of the other paintings in this wonderful exhibition, everything is out in the open, in plain sight, and yet none of it fits together in some simple story. Who are these men and why have they gathered like this? What ritual are they practicing? Any answer we offer seems too reductive, too much a box that the best paintings resist fitting into. Conversely, the weakest paintings are the ones dominated by a single pictorial element, and seem like a moment from a familiar narrative.

Bradford is a painter who understands that stories are a dime a dozen, that finally they are too small a container for our desire to be a witness and testify. Perhaps it is this desire to tell but not nail everything down that enables her to veer close to anecdote without becoming anecdotal. I am thinking of the small painting, “Art Students Throwing Their Paintings off the Bridge,” which is funny, tender, and subversive. What a wonderful, freeing moment the artist arrives at in this painting. After all, she isn’t just being a witness; she is also on the bridge with the students. She too has jettisoned her earlier art for something more. In her last show, which was in 2005, Bradford showed simple cartoony paintings of people cutting themselves while shaving or engulfed by a torrent of water in the bathroom shower. Those paintings were charming and funny, but her new paintings exceed that well-trod arena. They are visually denser, full of specific and surprising details, each of which constitutes an open-ended story. She has stretched out time as well as slowed it down; and we cannot figure out what will happen next. Her paintings make sense the way a lightning bolt exploding a golf cart on a sunny day makes sense. Everything is in front of us, but what might follow is beyond comprehension.

Consider this—Bradford has accomplished her breakthrough by taking up the most unlikely of all genres, marine painting, in which she synthesizes the bluntness of primitive painting, the directness of gestural mark-making, the gamut of expressionism from James Ensor to Sherman Drexler, just to suggest some of many possibilities she brings to bear. There are many areas in her paintings that are simultaneously abstract and representational, without privileging either. She uses scumbling to evoke a worn wall or a streaked sky. Every mark in her paintings is both itself and something else. We are in the presence of a painter who is walking a tightrope of her own making. The deftness of brushwork and distinctiveness of palette is all her own. And when I say marine painting, I mean that Bradford has taken on all different kinds, from a whaling scene to a battle at sea, and from big ocean liners to clunky sailing ships. In “Lost Liner,” a huge ocean liner (it looks like a foreshortened wedge of salmon-colored cheese) is stuck in the ice, with lots of little figures walking around it. In “Whaling Painting,” the dabs of bright colors on the ends of the harpoons piercing the white whale remind us that this mythic mammal is regarded as both a source of oil and a trophy, which in turn comments on the slippery status of painting. Is painting a trophy collectors mount on the wall or a mirror of the human desire to subjugate nature?

One senses that Bradford recognizes the potential for metaphor that the minor genre of marine painting possesses, and accepts that she can best find it by moving forward brushstroke by brushstroke. Signs and symbols are of little interest to her. She is never heavy handed about her search and, in some cases, she accepts that metaphor eludes her, yet still finishes the painting. “Beach” and “Imaginary Moon” don’t have the visual staying power of a painting like “Wet Horse,” in which she reaches a moment of such oddness that everything about the horse emerging from the sea, the two open boats and the sailing ship seems both right and necessary. Such is the artist’s trust in the logic of what she discovers through being open and seeing what emerges on her canvases with an innocent, accepting eye.

The poet Wallace Stevens said: “It must be abstract. It must change. It must give pleasure.” It is a triple injunction that few artists ever fulfill, but, in this recent exhibition, Bradford joins that small group of contemporary artists for whom pleasure is not a dirty word because, among other things, she understands that it can be made to engage both the eye and the intellect on many levels. With these paintings she has made a fresh space for herself and for painting, where reflection and speculation can take place, and where one sees oneself seeing and thinking. The power of these paintings resides in their being both mysterious and direct, the combination of which endows them with a remarkable inexhaustibility.

Gina Beavers: The Life I Deserve

The lighting for Gina Beavers’s exhibit The Life I Deserve is Instagram perfect. That seems only fitting for paintings based on social media posts and aware that they will return there as #art #museum #artselfie or even, in a potential throwback to 2015, #museumselfie. The artist’s #Foodporn series from 2014 gets particular attention, though the newer series based on makeup tutorials had some snapping pics as well. All this begs the question, what are we looking at?