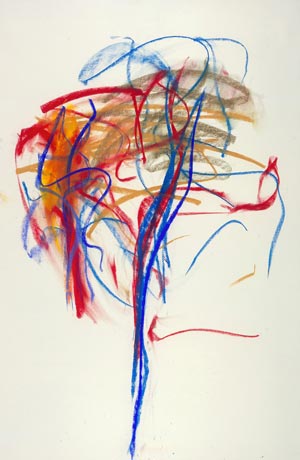 The comprehensive survey exhibition of Joan Mitchell’s works on paper at Cheim and Read spans from the late 1950s to the year before she succumbed to cancer in 1992. These 41 works in oil, watercolor, pastel, pencil, gouache, and ink are daring and unmediated orchestrations of structured intention, energy and emotion from an artist who remained a key figure of the New York School despite having lived in France for over 30 years.

Born on February 12, 1925, Mitchell was a pioneering female abstract artist who, along with Lee Krasner, Grace Hartigan and Helen Frankenthaler, achieved critical and public acclaim in a field dominated by men. Before settling in New York in 1950, Mitchell attended Smith College in Massachusetts and later transferred to The Art Institute of Chicago in her hometown. She continued her studies at Hans Hofmann’s school, and in the earliest drawing of the show, dated 1956-58, this influence is evident in a few trademark impasto hovering squares that circumnavigate the perimeter of the page. Later in her work, these gestures evolved into a concise vocabulary, unique to her hand.

Beautiful in the extreme, the delicately nuanced lines and pure colors of Mitchell’s work can also be terribly, precisely blunt and in some cases, frightening in their emotional efficacy. Her slashes, clusters and snarls of line suggest worlds within worlds and contradictory states of being. Few artists have been able to convey simultaneous states of aloofness and intimacy, thrill and rage, with such economical means—compressed pigments pushed, pressed and pulled over a clean white page. In many of the pastels, and especially those from 1991 and 1992, Mitchell incorporates formal oppositions such as light and density, as well as empty space and calligraphic forms. These same traits are evident in the five works on view from the ’50s, thus underscoring her long commitment to and unwavering belief in her subject and process. While some of the works can be viewed as exploratory or provisional in light of Mitchell’s paintings, I see them simply as fully realized, unformulaic and profound smaller works.

Mitchell’s tenacity in life, her insistence on being regarded as an artist first, female second, her alcoholic rages, and her long battle with cancer lend a biographical poignancy to the interpretation of her work. I think she said it best in her own words, “Art is not about art, art is about life.” She drew upon memories of emotions and sensations, and her pastels in particular conjure specific qualities of landscape and atmosphere. Yet, her work is never limited to the (exterior) natural world; it concurrently reflects the emotional intensity of an inner panorama.
In a 1992 pastel (no.18), expansive smears of gray, white and green obliterate the layers of colors below, modifying the mood of the piece, as the structure teeters, about to collapse. In another (no.20), aggressive red and blue vertical strokes threaten to consume an awkward lacy mass. Much of this work reads as records of prolonged attacks followed by attempts at reconciliation and harmonization, with neither side able to claim victory. Nothing was safe. The attacks were against space, structure, the figure and the ground; against beauty, elegance and purity. Yet, once set in motion, she attempted to undo all that she’d done.

And in a pastel that Mitchell made towards the end of her days, cobalt violet and blue inscribe searching trails around a forceful, smudgy collision of cinnabar, yellow ochre, raw umber and cadmium red lines. This crowd of colors brings to mind a moist spring heat, a sense of contained energy about to explode with new life, her pockets of densely layered colors releasing individual strokes that track off into a powdery oblivion.

In order to understand the motivations and mission behind the Joan Mitchell Foundation, it is helpful to first understand that artist Joan Mitchell (1925–1992) placed art above all else, both at the center of her own life and through supporting her artist peers—thick in the battle and euphoria of the studio—who surrounded her during her lifetime. Mitchell was a pioneer artist in Post-War New York, earning an esteemed reputation among her Abstract-Expressionist cohort while also creating a dialogue with the French Impressionists of the previous century.

Hemlock is presently on display in the Baltimore Museum of Art’s blockbuster exhibit, Joan Mitchell. Katy Siegel, from the BMA, along with Sarah Roberts, from the San Francisco Museum of Modern Art, co-curated this dazzling retrospective. They also co-edited its beautifully illustrated catalogue (a tome, really) and contributed insightful essays to the text that range from scholarly to anecdotal.

Oscar Murillo’s latest paintings are big, bold, and breathtaking. They would not look out-of-place in a survey exhibition featuring significant works by Joan Mitchell, Helen Frankenthaler, Al Leslie, Harry Jackson, and Grace Hartigan. Anyone who ever considered this 36-year-old artist a zombie abstractionist should take note. He has matured into someone who should be considered an honorary second-generation Abstract Expressionist.