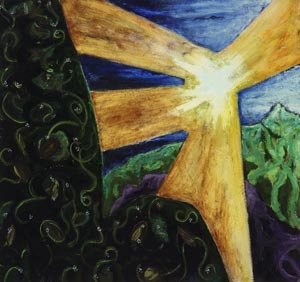 The quandary with Gregory Amenoff’s paintings is that he has never stepped back and interrogated that initial flush of deep feeling he had about the American visionary tradition, particularly Arthur Dove, at its most optimistic heights. More often than not, Albert Pinkham Ryder and Marsden Hartley are haunted in their work, while Dove settled a little too easily and often for hackneyed symbols—the glowing orb of light in his paintings isn’t just unreal; it’s downright banal. And make no mistake; I am a fan of Dove, but I am not in complete thrall of his paintings when he settles for symbols. They are his weakest works, if his most popular.

In Amenoff’s recent exhibition, Facing North, which is his first in five years, he continues to align himself with the symbolist vein of the visionary landscape tradition, which starts with early Siennese painting, the Lorenzetti brothers and Sassetta, and continues through Samuel Palmer and Odilon Redon to the American branch (Ryder, Hartley, and Dove, and more recently Forrest Bess). Many of these artists believed they were conduits, which some observers have construed as a kind of madness. Herein lies the problem. How do you become a visionary artist in the 21st century, without resorting to received symbols? I don’t think you have to go mad to do this. Bill Jensen has done it, and, in a different way, so has Chris Martin, perhaps because they are willing to embrace awkwardness, discomfort, and embarrassment without turning these actions into a style. There is a range and variety to their work. Their inconsistency is their strength.

In Facing North, the artist returns to the lava-like surfaces that were integral to the paintings that first gained him attention in the early 1980s. From the late 1980s to the late 1990s, he used rabbit skin glue and distemper to flatten the surface into image. It is also during this period that he began introducing symbols of trees, thorns, and stars into his work, which helped accommodate it to a more literary analysis, a this equals that kind of equation. In the new paintings, all dated either 2006 or 2007, Amenoff applies viscous oil paint to panels, and the surfaces are full of sensual passages, scumbling, trails, daubs, and dabs of paint. There is a crusty lusciousness to the surfaces and colors that is akin to cake frosting, after the cake has inadvertently been left out on the picnic table a few hours too long.

Compositionally, Amenoff generally places a geometric shape in and against a semi-representational landscape that contains water, mountains, sky, and vegetation. Sometimes the shape, like the faceted “Arch III,” flattens the landscape out. Other times, as in “SunPillar,” it becomes something we can see and see through. The light is gorgeous, as is the palette. Amenoff loves to paint, and there are lush virtuoso passages in nearly every painting. But all of this doesn’t quite lift the painting to the realm the artist desires. The biggest predicament is that everything that he puts into his paintings fits together so well. Even when he is disrupting it with a geometric shape, the internal logic and scale of the jigsaw puzzle-like shapes line up too smoothly.

By domesticating the visionary, Amenoff tips his scenes into the domain of the pastoral, which isn’t necessarily bad. He is a painter for whom decorum is a tad too important. He wants viewers to know that both he and the world we live in are well behaved, and each of them will do the right thing. Light from a radiant sky rises from behind the barren mountains. A yellow arch floats in the sky, glowing. The sea churns in its rhythmic striations. These symbols relegate the paintings to the picturesque. There is nothing impolite about them, nothing disquieting. We are not left wondering, what the hell is going on? They don’t subvert our childish conviction that there is a surface logic to reality, and that whatever governs it is not daemonic or beyond understanding. Amenoff hasn’t superseded our logic with one that allows the possibility that invisible forces might suddenly and unexpectedly manifest their troubling presence.

By any accepted standard, these are extremely beautiful paintings, but, for the true visionary, conventional beauty and received symbols were never really the point. This is not to say that Amenoff can’t do what he set out to do, and become a visionary painter. I also don’t mean to suggest that one cannot make a breakthrough and create great paintings at any point in one’s life. In order to do that, I think Amenoff has to face the issue of distinction and trust; he has to let each painting take him somewhere, and he has to trust that it will become something that he has never seen before, something that might even scare him. He has to stop noodling with the surface, adding flourishes here and there, and he has to believe that visions can come from the most ordinary events and things, and that they can rise from the very ground on which he (and no one else) is standing. It is not an impossible task.