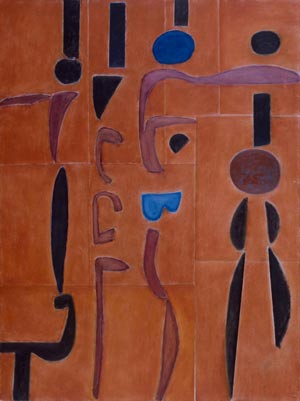 According to Gore Vidal, we are living in “The United States of Amnesia.” A stroll through the incisive Dreaming of a Speech Without Words: The Paintings and Early Objects of H.C. Westerman is a brief reminder of how much we have forgotten.

H.C. Westerman (1922-1981), one of the lone wolves of American art, served in both World War II and the Korean War and emerged a scathing critic of America’s ascendant militarism and mindless materialism. For those of us whose image of the antiwar veteran begins with John Kerry tossing away his medals (or his buddy’s, depending on whom you believe), the bald mockery of paintings like the cartoonishly violent “Battle of Little Big Horn” (1959) or the scatological “Destructive Machine from Under the Sea” (also 1959) might come as a shock, but they recall the rich strain of American populist skepticism about all things military that landed thousands of conscientious objectors in jail even during “the good war,” World War II. “A Soldier’s Dream” (1955) is especially trenchant; inside a three-sided box made of wood and red stained glass, a schematic male nude, with both legs lopped off at the knees, hangs from his wrists like a prisoner in a “stress position” at Abu Ghraib or Guantánamo Bay.

The scope of the show, a traveling exhibition organized by The Contemporary Museum, Honolulu, and curated by Michael Rooks, covers Westerman’s earliest efforts, including work he made while studying to be a commercial artist at The School of the Art Institute of Chicago (1947-1950), and continues through the early sixties. Westerman’s student work, however, is anything but juvenilia, since by that time he was already in his mid-twenties and had fought in a world war. Pieces such as “Untitled (in the manner of Salvador Dali)” (ca. 1948) and “Theatrical Worlds Spirit after Bernardino Jacobi” (ca. 1949) presage the underground comix movement that was still twenty years down the road. These works and others from the early 50s, like two untitled portraits, one that recalls pre-Cubist Picasso and the other that seems to prefigure Jim Nutt, are reminders of just how wide-open art making was in the vacuum following Abstract Expressionism’s bolt from the blue. As the Museum of Modern Art’s bifurcated interpretation of that time (which narrowed considerably after the ouster of Alfred Barr)—with Pop on one side and formalist reduction on the other—was hardening into dogma, Westerman’s art, along with Nutt’s and scores of others, sprang up like skunk cabbages in MoMA’s well-tilled garden. It seems consistent, in a metaphorical sense, that Westerman’s constructions superficially resemble folk or outsider art, since this is what the de facto became. He could not harness his curiosity, imagination or inveterate wiseguy persona to a set of formal principles, and so has remained largely sidelined despite the depth of his thinking and sensitivity. 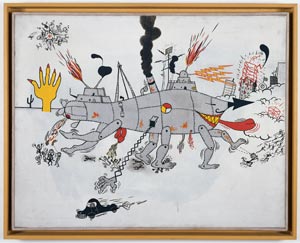 Westerman’s art was exceedingly personal; he nailed what looks like one of his own Marine Corps dog tags to the exterior of the construction “Untitled (“Unusual Physician”)” (1957), which is also covered with red and black smudges of his own fingerprints. The most intimate work in the show, “Ensor’s Mother” (1956), is also the most radical, and the most bewildering. It is a wooden box with the work’s title inlaid in capital letters on its lid, which is open to reveal a heartbreakingly gorgeous silverpoint and conté drawing by James Ensor of his mother, eyes closed, presumably asleep. The museum’s label states that Westerman made the piece in commemoration of his own mother, whose death was especially traumatic for him. It does not explain how the Ensor came into Westerman’s possession, or whether the piece was meant to be a work of art in itself, or simply a container to preserve the drawing. Perhaps it doesn’t matter; with this exquisitely simple object, Westerman demonstrates the transcendent interconnectedness of emotion, biography, history and art, and he does so with an intuitive stroke—the physical appropriation of another artist’s work—that remains a hot button issue in critical discourse to this day. Yet, with Westerman, it seems entirely of a piece, entirely natural, and entirely his own.

Running concurrently with the Westerman show at the Montclair Art Museum is Will Barnet: Recent Work, a beguiling, room-sized exhibition of audacious reinvention. Barnet’s work evolved from expressive figuration to hard-edged abstraction before settling, from the 1960s onward, into the linear classicism for which he is known. According to the exhibition brochure written by Chief Curator Gail Stavitsky, Barnet cast aside his signature style three years ago after an accident confined him to a wheelchair and returned to the Native American forms that inspired him in the 1940s. Now 96 years old, it wouldn’t be an exaggeration to say that Will Barnet is making the most exuberant paintings of his life. Their loopy, spiraling shapes, glowing color and zigzagging designs aren’t a summation, but a return to the fountain of the artist’s youth. By jettisoning his mature style in the middle of his tenth decade, apparently without regret, Barnet risks indulging in the common fantasy of revisiting the passion of youth with the wisdom of experience. Miraculously, he pulls it off.