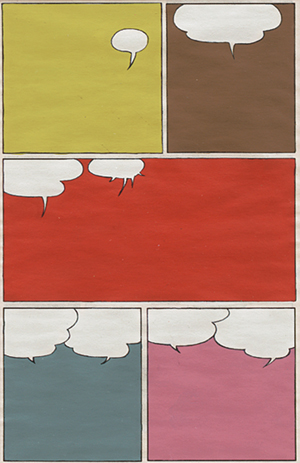 In order to pass muster with the critical establishment, art today needs to be a critique. It must reveal an awareness of cultural perceptions dating back as far as the 60s such as: “America has a racist history,” or “Male sexuality tends to objectify females,” or “High art is about cultural snobbery.” Regardless of the relative importance or truth of these tenets, their presence has been deemed essential to the quality of an artwork. Hence, the work in Comic Abstraction: Image-Breaking, Image-Making at the Museum of Modern Art is, as the title suggests, about the deconstruction of the cultural role of images in contemporary culture. This role—as we are informed by curator’s statements, press releases and wall texts—includes such tasks as revealing racial and sexual stereotypes and identifying how mass media sets out to influence its viewers.

This sort of indoctrination might account in part for the uniformity of much of the work in Comic Abstraction which is abstract in the sense that late Monet was abstract: by fiddling with the way an object is represented. Take Sue William’s paintings. From afar, their floating skeins of paint look like a kind of controlled gestural abstraction. Up close, you see that they depict the contorted forms of human bodies with pronounced nostrils, anuses and clitorises. The abstraction of these paintings is superficial and, as a result, confusing. If the artist wants to show body parts, why doesn’t she just do so? In order to explain her reticence, I find myself falling back on the tired rhetoric I’ve been force fed by galleries and museums for the past two decades: “Williams is intentionally obscuring the feminine dimension of the body through use of bright colors and movement in much the same way that mass culture shields us from our ingrained biases and cloaks its own efforts to influence our thought.” Yuk. If I have to justify a painting to myself with a rote language that isn’t even my own, then something’s wrong. Art, when you encounter it, should deliver you from your petty intellectual reflexes. 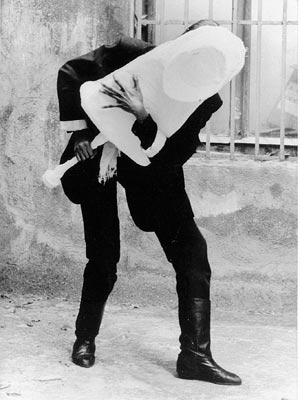 There are highlights to the show, among them Ellen Gallagher’s early paintings and Franz West’s “Mirror in a Cabin with Adaptives” (1996). But I would argue that, in both cases, their connection to the rest of the work in the exhibition is tangential. Which brings about another source of confusion: What exactly is meant here by the word “comic”—work that’s comical or work derived from comics? Whereas much of the show falls into the latter category, Gallagher’s canvases do not. The tiny caricatured faces she incorporates bear little resemblance to the comics’ graphic forms and bright colors. Her sprawling compositions have nothing to do with deconstructing an outside image. If anything, they amaze with their visual novelty. West’s “Adaptives” are chunks of formless plaster stuck to steel rods that he invites viewers to carry into a large cube plastered with newspaper clippings and fitted with a floor-to-ceiling mirror. Brandishing an “adaptive,” you are free to do what you will in the cube (I thought of breaking the mirror—telling I’m sure) but, whatever you do, it seems hard to avoid feeling a little comic. In form, however, this has little to do with the rest of the show.

I love comic books and was an avid reader of them for years. I believe they can be used very effectively in art—just look at the way Barry Le Va mutated their narrative format into his cryptic sculptural practice. As far as critique goes, Peter Saul’s comic paint barbs are way meaner than anything in Comic Abstraction as is much of the work of Jeff Koons, whose absence from the show is inexplicable. Any of these artists are as abstract as most of what is in the show. In fact, Comic Abstraction assiduously avoids the cultural critique it claims to represent by selecting pieces that are ideologically safe and aspire mainly to the look of comic book culture, not the wit. As if in recognition of this, Juan Muñoz’s installation, “Waiting for Jerry” (1991) is situated in a side room by the show’s entrance. The lights are down and Looney Tunes music blares from speakers. The only thing in the room is a mouse hole lit from inside. Where’s Jerry the mouse? Like Comic Abstraction, “Waiting for Jerry” places you in a state of expectancy. But when you bend down and look inside the mouse hole, nothing’s there.

PROPHET: The Order of the Lyricist

PROPHET: The Order of the Lyricist by 7NMS, the duo made up of choreographer/dancer Marjani Forté-Saunders and composer Everett Saunders, is an invitation to an exclusive listening party of sorts.

Jayson Musson: His History of Art

In the second video of three in Jayson Musson: His History of Art at The Fabric Workshop and Museum (FWM), a russet-colored-corduroy-suited, yellow turtle-necked, and well-meaning but supercilious art collector “Jay,” aka Jayson Musson, gently explains to his roommate, a pot-smoking hare, Ollie: “Art history isn’t that complicated. Whatever man fucks it kills and whatever it kills it fucks.”