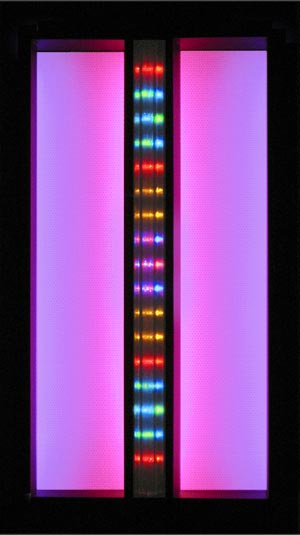 In two concurrent exhibitions at Dam, Stuhltrager Gallery, China Blue and Carol Salmanson push beyond the limits set by formalism, articulating a notion of space through sound and luminescence.

Salmonson’s nine-foot tall “Tri-Quadular Cone,” (2007) crowds near the gallery door, placed there to shine light on the otherwise empty street at night. Fluorescent light bulbs, glowing behind reflective sheeting of different colors, piece together an artificial rainbow of sorts, though this particular work does not convey anything starkly different from the light sculptures of either Dan Flavin or Keith Sonnier. “Upon Reflection” (2007) is a series of light boxes, each comprised of two blue fluorescent bulbs along with small, colorful light emitting diodes. Framed by the bright blue glow, the yellow and red LEDs evoke Barnett Newman’s “zip” paintings. Just as you are about to lose hope for an original form of contemporary abstraction, Salmanson comes into her own with “Glimmering Grove” (2007). White reflective paneling covers the staggered walls of the gallery’s second exhibition space, with fluorescent light bulbs and tiny LEDs creating a feeling of ambient incandescence.

“Secret Arch,” (2007) by China Blue appears under a white-covered canopy. Two hidden microphones are deployed to recreate the Whispering Gallery at the end of the Oyster Bar ramps in Grand Central Station. The artist utilizes the trajectory of sound to carve space, while implicating the gallery visitor as an eavesdropper on brief, whispered secrets from persons unknown. Sometimes the voices can be heard with a clarity that diminishes the sense of illicitness that seems to be the intention of the work. A laptop and a microphone are provided in a corner of the room for anyone who would like to add his or her own thoughts to the computerized flow of consciousness. While sound sculpture is still marginalized by the mainstream due to its object-less nature, it is ironic that stodgy formalists are not more interested in the data-mining techniques involved in creating such works of art.

As new media gradually shifts sculpture away from the object and more toward sensory experience, such displacement not only counters the conspicuous consumption oversaturating the contemporary art market, but it also raises the question of whether the very concept of art will gradually move away from the tangible sphere. Despite some slight weaknesses, these exhibitions succeeded in placing new emphasis on architectonics and realigning the boundaries of space with immaterial means.

Listening In: Cat Toren, Inside the Sound

Pianist and composer Cat Toren combines classical training with a commitment to the questing, open-ended nature of free jazz. Her playing is lyrical and spare, with a deep affinity for the qualities of space and silence. Likewise, her composing is attuned to the importance of simplicity.

Edges are limits. Limits are exposed through questioning. Uncovering and questioning limits in painting is a process that is akin to questioning the limits of the social, political, and personal—working painting at the margins or the center; top down or bottom up; visible or invisible; surface conditions and underneaths.