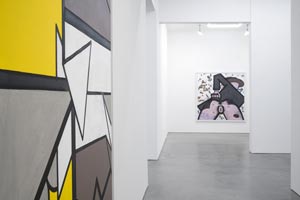 When Carroll Dunham was in his cartoony, biomorphic period (1982-1993), critics said that he belonged to the same family as Bill Jensen and Thomas Nozkowski. Starting in 1994, after he became more figurative, these same critics consigned him to the group that includes maverick painters such as Philip Guston, Peter Saul, and Jim Nutt. If only this were true. One of the abiding problems with Dunham’s paintings is the discrepancy between image and paint. He is a graphic artist, much closer to Keith Haring than to Guston, who once said that trying to put space into a painting is like trying to cram the stuffing back into a mattress. It was something he had to work through in paint. The artists with whom Dunham has been compared put space into their paintings, thus rejecting formalism’s stifling, repressive paradigm about the historical necessity of flatness.

There is nothing spatial about Dunham’s dickhead—the Everyman motif the artist has employed for several years; he is a bit stiff and very flat, like a decal. In his recent exhibition, which can be divided into two groups—one flat and geometric and the other rounded and “painterly”—Dunham turns his dickhead around, either towards the viewer or bent over, baboon-like, to flash his ass. He is still eyeless, wearing a hat and suit, and his phallus-cum-proboscis peeks out at us; in “Square Mule” it is framed by the triangular bend of the arm and elbow. It is a coy compositional move, a game of peek-a-boo that lessens the impact of the rest of the image. The artist is winking at hip viewers, letting them know that they can see the painting as a kind of game.

In “Dead, Yellow,” a thematically-related group of five geometric paintings, Dunham rotates his dickhead on his side, thrusting in from the right: in the first of the series, “Dead, Yellow: One,” his hat is angled down, with its front brim folded up to reveal a jutting triangular jaw and penis trumpet. He is wearing a suit and tie, and his head and shoulders dominate the composition. Along with black, gray and white, the palette runs from dark brown to canary yellow. The four other paintings riff off “Dead, Yellow: One,” with each focusing on a different section of the painting. Peek-a-boo is still operative. Is that “it” over there? Where did “it” go? One could say that the artist is either “deconstructing” his image with the supplementary paintings, or that he is relying on art tricks to stretch it out, make it work for him again. The deeper problem is that each dickhead clings as tightly to the painting’s surface as one of Gene Davis’ formalist stripes. You would think that the ghost of Clement Greenberg has been offering instructions to the artist in his studio.

Why am I bringing up Greenberg? It’s because Dunham wants to be both a painter and a graphic artist and he can’t seem to close the gap, which is understandable. Haring’s paintings aren’t much and neither are R. Crumb’s. But their graphic line drawings, like Dunham’s, are a far different story. Dunham attaches torn pieces of brown paper to the surface of “Square Mule.” He also writes the dates that he worked on the painting with a looping line that can be taken as a sign of painterliness. But that’s what everything is—a sign. The problem is that these signs (brown paper, signature, doodle, jagged line) are effects, gestures made to activate the surface, lift the painting out of the dead zone it inhabits. There is no flesh to Dunham’s dickhead; he is also a sign. The moves that Dunham has made in these recent paintings—turning the figure forward and backward because it had existed in profile a little too long—still don’t extricate it from the realm of empty signs.

In “SquareMule,” Dunham depicts his dickhead shoving an L-shaped gun into his asshole, while pressing his vagina against the painting’s surface, like lips against a windowpane. Here is where something disturbing, upending, truly weird, and nauseating (take your pick) in paint could have happened, but didn’t. That’s because paint and image aren’t integrated to become something else. It may be “painted to resemble a squishy éclair,” as Jerry Saltz said in his over-the-top review in the Village Voice (March 30, 2007), but it doesn’t become one, which would have made it more disquieting. It isn’t visceral enough, which is strange given the subject matter. You could say the artist painted the vagina in a hands-off manner, denying “SquareMule” the immense potentiality it possesses.

I keep thinking that Dunham’s paintings are going to take me to some visceral place I haven’t been before, someplace truly funny and horrifying, someplace beyond academic discourse. For me, his work always remains more tantalizing than satisfying. It is stuck trying to say something big but never quite making it. Doesn’t he know that the pressure to say something big is often a recipe for disaster?

My esteemed colleague Saltz believes that the bending figure is “a perfect metaphor for the endgame America may be currently engaged in. This is America as a failed state.” For painting to be legitimate these days, it has to satisfy the theorists teaching in Ivy League schools and offer an “institutional critique.” What better institution to critique than America. Just as when Greenberg and his ephebes ruled the roost, here we are again, with lots of smart people kissing the ass of academic authority. In 1971, when Greenberg’s theorizing held many true believers in its headlights, fearless Peter Saul painted “ClemunteenaGweenburg,” which showed a naked, yellow, one-breasted Greenberg sitting on a palette titled “Abstwack Arts” and sticking a paintbrush into (or pulling it from) his vagina, labeled “Hy-Brow Art.” Saul is an iconoclast and Dunham is a wannabe. Perhaps Dunham might consider fucking the corpse of Greenberg with a loaded brush.

Jane Freilicher (1924–2014) and Thomas Nozkowski (1944–2019), both important painters, were very different artists. She made figurative paintings of still life objects with countryside and urban scenes in the background, while he was an abstract painter whose subjects had elusive, “real” sources. They hardly knew each other, and they certainly didn’t influence each other. What, then, is to be gained displaying them together, in this exhibition of some 16 works, late paintings by both of them?

Each of Nozkowski's paintings wind up as amalgams of geometric and biomorphic abstraction of varying scale, color, and pattern that appear to me to be an invented pictographic language analogous to one thing leading to the next.