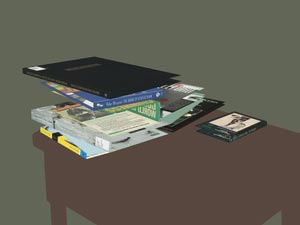 Even a non-reader knows that books stack up quickly and ravenously consume space. Once they’ve taken the bookcase proper, they spread onto the secondary bookshelves: the desk, the dresser, the kitchen table, the back of the toilet, the car seat… While some books are in “use” over long periods of time, many are never even opened, let alone read. It’s as if these books—disregarded after their initial obligatory flip-through—remain to serve some other mysterious function, perhaps merely that of taking up space.

Los Angeles-based artist Brandon Lattu has found a way to reveal the space “taken up” in his stunning yet cool virtual collection of books on view this month at Leo Koenig Inc. in Chelsea. For the show, the book series Library is accompanied by three other recent works which I won’t get into here, other than to say that the free-standing sculpture, “Banqueting House”—a sort of perspectival conundrum-cum-experiment in wrapping an interior point of view around its own exterior, architectonic manifestation—is a must-see, and a hallucinatory one at that.

But for now, back to the show’s central theme: books. When viewing the work, one can’t help but imagine Lattu at home among his various stacked-up and strewn-about books, scratching his head and suddenly arriving at the concept for his latest series. The idea, relatively simple in retrospect, involves scanning the covers and spines, but not the pages, of all of the books in his personal library—from art monographs, to art journals, to group show catalogues, to crime fiction novels, poetry, field guides, manuals—and to then reconstruct the precise cubic space of each book as a 3-D computer rendering. Lattu restores each book to its original perspective but surrounds it with a monochromatic abstract silhouette of the shelf or surface on which it had originally rested. Together, the works in this series recreate all of the key repositories for books in Lattu’s home, from his organized bookcases to the growing stack on his bedside table.

In this quietly compelling series, Lattu exhibits not so much a photographer’s eye to see things, but the capacity to see through things. Each book, with its inverted perspectives and imaginary opacity, has a sci-fi ultra-dimensionality. This otherworldly sensation is due to Lattu’s technique, which involves taking pictures without using a camera. He uses the scanner as a kind of pure light ray etcher, drawing comparison (as stated in the show’s press release) to one of the early pioneers of photography, William Henry Fox Talbot, who in 1846 described his work as “impressed by the agency of light alone…sun pictures themselves, and not, as some persons have imagined, engravings in imitation.”

As Lattu’s immaculate color Type C prints reveal, one way to read a book is simply through its cover, where we take in the volume’s object-ness, the author’s name, the title, the publisher’s logo, and whatever image might wrap around the dustjacket—and through this experience, become a connoisseur of the closed book, the book as still life, the book that reads but is not read.

How, then, does Lattu’s Library read? For one, the books are interesting as an ever-evolving photo montage, captured in passing, a shifting tide of ideas in an ebb and flow of influence. Lattu’s collection, which includes many gems, has an academic intensity and a certain degree of curatorial rigor, but it also includes many perplexing and charmingly modest anomalies (as well as a supplementary pile of books checked out from the local public library, with coded spine labels to show it).

But the most provocative aspect of the Library series is, in fact, the lack of paper pages between the faithfully rendered covers of each book. Space is provided for them, but instead there is only a block of empty, pulp-free air to take their place. It’s as if the books had been mummified and their “bodies” become hollowed-out shells.

Where, then, are the pages? Is Lattu alluding to the fact that so much of our culture’s publishable “content” is already being scanned by corporate archives, retailers and search-engines like Amazon or Google? Is he objecting to a one-size-fits-all language bank, paid for by pop-up ads and available to all? If so, Lattu could quite absurdly be seen as feeding on the last scraps of the carcass of our nearly extinct written culture.

Or perhaps Lattu is more playfully punning on the old adage about judging a book by its cover. By this work, one might think that he endorses the idea that you can, and that his library is better understood as a collection than by the individual works he has represented, stripped as they are of their inner content.

What does a girthy S,M,L,XL with ghost pages tell you about itself or the artist? How about a book with the name Ad Reinhardt spelled out along its spine, or the flopped-open, invisible pages of a Webster’s Dictionary? What do I see in two side-by-side copies of a highly collectable Blinky Palermo monograph, or in a study of the eighteenth-century Japanese artist, Hokusai? Or The Great International Paper Airplane Book, or Charles Willeford’s crime detective novel Pick-Up, or Audubon’s Guide To North American Weather, or an Anthology of DC Comic Books. Perhaps most ironically, a book entitled, Photoshop Manual.

While potentially autobiographical and even confessional by nature, to a certain extent these works resist being read as self-portraits. You may not get to know the artist by assessing the books he’s read, looked at or simply collected. It may not be possible to understand what the artist has made by viewing what he has downloaded into his machine. Thankfully, this work doesn’t feel like a version of “Portrait of the Artist as a Well-Read Young Man.” Perhaps this is because none of the books have pages, and therefore don’t seem readable by anyone or anything. Or it might be because Lattu seems so involved in the serial, technical side of recording the books that their concrete factuality takes the stage and never gives it up. We become fully absorbed by their page-less presence and the volume they take up—relieved from the burden of our own curiosity to reach for, grab hold of, flip through.

By plopping such a specific collection of symbolic objects from his own exterior world, piece by piece, onto the bed of a scanner, Lattu renders his environment hollow. This is liberating, especially when the books become open space, free from the information that molds and conforms who we are. In his self-proclaimed “empirical model,” the objects consuming our space are simply scanned into oblivion. In this respect, Lattu’s show, despite its tranquil façade, has an underlying and compelling violence if not morbidity. But the books—or the exquisitely wrapped voids—have never read so well.

Dick Higgins’s A Something Else Reader

The Reader models how contemporary artists and publishers can build on and subvert the communicative forms of the recent past. It collects excerpts from the multifarious output of its namesake press: event scores, concrete poetry, conceptual collages, philosophical essays, and reprints of classic modernist publications.

It is a mystery how the twentieth-century French painter Marguerite Louppe has escaped the recognition she has deserved for so long. Born in 1902 in eastern France, Louppe and her family moved to Paris shortly after her birth. Louppe studied at several academies there, including the Académie Julian, where her fellow students included Dubuffet, Duchamp, Bourgeois, and Maurice Brianchon, whom she married in 1934.