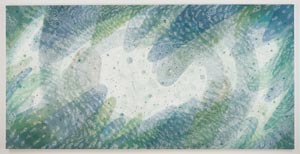 In Abby Leigh’s painting, a naturalist’s sense of empiricism coexists with a mystic’s sense of wonder. In her previous show at Betty Cuningham, entitled “Systems,” the naturalist in Leigh was dominant. In the current show the mystic has the upper hand. The potential for metaphor gleaned from the analytical, almost scientific, comparison of image to text has ceded the way to a new type of open-surface painting that attempts a reconciliation of what can be known with what can only be intuited. This is the task of any artist: to move her work into a terrain in which the intractability of nature’s mysteries is understood as its essence. This position, once achieved, is the only one in which science becomes subservient to art.

Leigh takes her current exhibition’s title, The Eye is the First Circle, from Emerson, a philosopher who found in nature answers to questions pertaining to everything from ethics to national identity and, like Leigh, struggled to reconcile the confines of the mind to nature’s vastness. Emerson had his detractors in American romantics like Hawthorne and Melville, for whom the transcendentalist’s philosophical digressions and staunch morality seemed antithetical to the work of an artist. Such tensions are coextensive with American art and philosophy, and Leigh’s work actively courts consideration in relation to them.

In her small drawings, displayed in Betty Cunningham’s front gallery, she comes closest to abandoning the mind’s moorings in observed phenomena and thus nearest to the complete abstraction toward which the show tends. They are circles given spherical dimension through the artist’s exquisite rendering in Sumi ink and graphite. In each, a gradient of grays shifts inward toward the point of highest contrast in the circle’s densely stippled center from which vein-like lines snake outward. Leigh’s spheres might easily be seen to resemble an eye, a cell, or some other natural phenomenon but their central placement on the page invites us to consider them metaphorically. Ancient canons of composition inform us that forms placed on the major axes of a surface tend to evoke a feeling of timelessness while forms placed off these axes will associate themselves with temporal movement and worldly phenomena. The simple composition of these drawings invites consideration of their circular forms as archetypal.

In the paintings, Leigh takes a different approach. With considerable care, she lays a network of white, open-centered circles over nebulous green-blue forms that cut back and forth on the diagonal generating an aquatic flux. The complexity here might be understood as an effort to reconcile movement in nature with the singular quality of pattern shared by all natural form. The effect generated by this de-centered movement is not metaphorical like the drawings, but narrative. While Leigh might obviously continue working in both directions, an integration of the paintings’ composition with that of the drawings might present her with a simplified structural scaffolding to explore what nuanced surface variations she might bring to the superb form of her drawings.

Veneration, respect, acceptance can turn things—images, but also systems—into something live, real, and revered; certainly not questionable. I have recently read a novel, which was composed by SMS messages and emails sent piecemeal from a clandestine iPhone by an Iranian Kurdish journalist imprisoned for five years on Manus Island in Australia. His crime? Trying to save his life by escaping from Iran, seeking asylum in the land of freedom. The book won several awards in that same country that locked him up and tortured him. The New York Times calls the author, Behrouz Boochani, “Australia’s most important writer.”