Rumors to the contrary aside, poetry is doing pretty well for itself. Besides having a SoHo loft for a house, it has had 1,773 discreet instances of itself published in the past year. That’s right, just a block over from Balthazar at 72 Spring St., 2nd floor, you can go visit poetry in its domicile and see the panoply of forms it took in the past year, along with 389 titles published in early 2007. In all seriousness, 2006 has brought with it some amazing books of poetry, from Nathaniel Mackey’s triumphant National Book Award winning Splay Anthem [New Directions] to the strong debut collections by poets as diverse in tone and tactics as Anna Moschovakis [Turtle Point Press], Ryan Murphy [Otis Books] and Carson Cistulli [Casagrande Press]. 2006 also brought with it some great opportunities for poetry devotees to get their hands on mythic volumes back in print for the first time in years or decades: Robert Duncan’s last two books [compiled as Groundwork by New Directions], Harryette Mullen’s first three books [compiled as Recyclopedia by Graywolf], and the complete 0 to 9, the famous 1960’s mimeo-magazine edited by Bernadette Mayer and Vito Acconci [Ugly Duckling Presse]. All of these, along with 2,155 other books of poems, books about poems, biographies of poets, chapbooks, art books, lined the shelves of the Poet’s House library during the month of April. 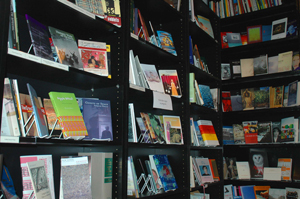 The showcase was by nature indiscriminant, which offered some insight into the absurdity of poetry publishing. For example, tired of flipping through the whole Faerie Queen to find that one heavily metaphorized nipple in the ‘Bower of Blisse,’ well, thanks to Hackett Publishing Co., you can now own just Book 2 of that rousing epic handsomely bound and edited by Erik Gray. W.W. Norton brought out a 9th edition of its Introduction to Poetry and Houghton Mifflin Company brought out a 6th edition of its Heath Introduction to Poetry; trying to tap into poetry’s one consistent audience, elementary school kids. The prize for the most innovative title of the year goes Riding for the Brand: 150 Years of Cowden Ranching: Being an Account of the Adventures and Growth in Texas and New Mexico of the Cowden Land & Cattle Company by Michael Pettit. Mr. Pettit is a poet, but unfortunately the book is an academic monograph with as little as much to do with poetry as the title implies.

The most striking aspect of the showcase was the innumerable small and tiny presses that have risen to the challenge of publishing poetry in today’s marketplace, where commercial houses have dropped the genre like a sack full of blind kittens into a river. Presses like Factory School and Wave Books have recently emerged to join the ranks of Copper Canyon, Graywolf, and Hanging Loose as independent publishers exclusively devoted to putting out several volumes of new poetry a year. In addition, a hundred or so chapbook presses have sprung from the union of desktop publishing and DIY culture, producing often-beautiful pamphlet-sized books featuring the work of both emerging and established poets. Seeing so many books hand-stitched or letter-pressed, with silk-screened cover art, was a reminder of the effort and the pride that goes into this art, but also brings me back to my initial sarcasm.

The chipper number quoted twice above gives a false impression of the state of the art. According to my off the cuff calculations, of those 2,162 poetry publications, only 180 were put out by commercial houses. And of those 180 titles, only 83 were single author collections of new poetry. Add to that the 357 university press titles, 185 of which are single author, and you are faced with the rather modest sum of 258 new poetry titles, or about 7% of the quoted total, which have the benefit of full scale distribution and publicity. I’m tempted to make an analogy between poetry books and their audience and baby leatherback sea turtles and their home in the Galapagos Islands. But instead I would urge you to check out Poets House, where all these books will join their already vast library. Do it soon, since the ‘House’ is moving to Battery Park City, far from the Balthazar bakery’s madeleines.

Nicholas Bredie is a poet living and working in Manhattan.

In his eulogy for Robert Motherwell the English critic Bryan Robertson remarked, “No other artist in this century could have been quite so much in love with literature, and, above all, poetry.”

Juan Arabia is a poet, translator and literary critic. Born in Buenos Aires in 1983, he is founder and director of the cultural and literary project Buenos Aires Poetry. Arabia is also in-house literary critic for the Cultural Supplement of Diario Perfil and Revista Ñ of Diario Clarín. Among his most recent poetry titles are Desalojo de la Naturaleza [Eviction of Nature] (Buenos Aires Poetry, 2018), Hacia Carcassonne [Towards Carcassonne] (Pre-Textos, 2021), and Bulmenia (Buenos Aires Poetry, 2022). After the publication of El enemigo de los Thirsties [Enemy of the Thirties] (2015), awarded in France, Italy, and Macedonia, Juan participated in several poetry festivals in Latin America, Europe, and China. In 2018, on behalf of Argentina, he was invited to the “Voix vives de Méditerranée en Méditerranée” poetry festival in Sète (France). The following year he became the second Latin American poet to be invited to the “Poetry Comes to Museum LXI,” sponsored by the Shanghai Minsheng Art Museum. Arabia has translated works by Ezra Pound, Arthur Rimbaud, Dylan Thomas, and Dan Fante, among others. Two of his books have been translated into French (L’Océan Avare, trad. Jean Portante, Al Manar, 2018) and Italian (Verso Carcassonne, trad. Mattia Tarantino, Raffaelli Editore, 2022). He lives in San Telmo (Buenos Aires) with his wife — the designer, poet, and literary translator Camila Evia — and son Cátulo.