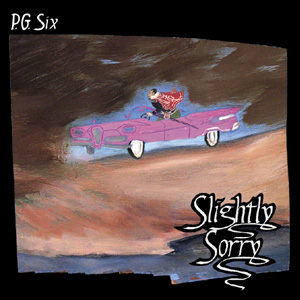 While the media are busy hyping the latest addition to the freak folk movement, P. G. Six continues to churn out carefully wacky quasi-folk-infused musical experimentations that are not so easily classified. Slightly Sorry is the one-man band’s fourth studio album and the first to be released on Drag City.

When Pat Gubler, the man behind P. G. Six, sat down with me in an East Village café, he explained that he did find the whole freak folk phenomenon a little weird.

“I think it really is a media thing in some way,” he said. He mentioned that acts like the Incredible String Band had been doing that sort of thing since the 1960s. “If they were playing in today’s climate it would be different for them, I think.” Not that he’s negative about the current championing of the movement, which has brought musicians he’s long admired into the limelight—performers like Bert Jansch and Vashti Bunyan—which he thinks is great.

“A friend of mine saw Bert Jansch in a pub in Ireland a few years ago and there was barely anyone there, and now he’s playing concert halls,” said Gubler.

Gubler himself has been playing music that fits somewhat within this label, as a founding member of Tower Recordings, a loosely hewn collective of musicians that recorded three albums in the 1990s. Other members included Marc Wolf, Bob Bannister, Helen Rush, and Matt Valentine. Like Gubler, they have all since recorded as solo musicians or as members of other bands. For example Matt Valentine is the MM of MM and EE, whose album Green Blues seems to be on everyone’s radar right now.

In 2001, Gubler went solo and released Parlor Tricks and Porch Favorites on Amish Records. With help from Tim Barnes on percussion, the album was recorded mostly on a four-track, and with it Gubler invented his signature sound mixture, which blends traditional folk with psychedelic sounds and uses all sorts of “wacky instruments,” a phrase that he used frequently during our conversation. “Probably around the time I started playing music my brother brought home a kit to make a harpsichord,” Gubler said, by way of explaining where his fascination with obscure instruments began. At the same time he was regularly checking out reference books on early music instruments from the library.

At first Gubler improvised on the piano, but he began taking lessons at age thirteen, when he learned the standard Bach/Beethoven/Debussy repertoire. He went on to study music at SUNY Purchase, but knew he wasn’t meant to be an academic or classical performer. His fascination was always with experimentation and improvisation.

In Slightly Sorry, Gubler expands his sparse, delicate, and smart repertoire because the album, in a sense, features a real group, one which he said grew out of necessity. (When Ira Kaplan of Yo La Tengo called him up to book them for one of the fabled Hanukkah shows at Maxwell’s, Kaplan asked Gubler if he could bring a full band.)

“Doing this record was cool because I sort of ended up with this band,” he said. That band consists of Bob Bannister on guitar and bass, Steve Connolly on bass, Robert Dennis on drums and percussion, and vocals from Debby Schwartz, Helen Rush, Sue Garner, and Megan Reilly—musicians from a variety of backgrounds. Garner’s Mule Yard Studios in Greenpoint was where most of the album was recorded.

Just after Gubler generously offered me one of his falafel pieces, which I traded for some babaghanoush from my plate, I asked him how he went from Amish to Drag City. “One day I got an email from Dan Koretzky. And it was weird because it looked like junk mail,” he said. “It just said ‘Dan K.’ and the subject line was ‘yo yo yo.’” Gubler had met Koretzky after playing a few shows with the High Llamas. Tim Barnes, who produced P. G. Six’s first album, has also worked with many Drag City artists, including the Silver Jews.

When I asked him how he composed albums, Gubler said that he thought in terms of LPs.

“I think about how a side begins and how a side ends and sometimes that doesn’t translate so well in the CD format,” he said. When I went home and listened to Slightly Sorry with this in mind, what he said held true. The first side ends with “The End of Winter,” a slow lingering guitar ballad. The second side bursts in with “I’ve Been Traveling,” which has a country-rock sensibility à la the Byrds.

These two songs exemplify Slightly Sorry, which is at times intricately sparse, at times triumphantly jangly, but always intelligent, sincere, and weird.

Oliver Baer does many things. He was the editor of Cthulhu Sex Magazine and Two Backed Books. His poetry has appeared in Literary Yard, Birds Fall Silent in the Mechanical Sea, Dream People, Bare Bone, Boog City, Infernal Ink Magazine, Cthulhu Sex Magazine, Horror Between the Sheets and Horror Writers Association Poetry Showcase Vol. II. His book of poetry, Baer Soul came out in 2011. His CD of poetry set to music, which came out in 2013, spawned a biannual poetry set to music show A Conclave of Baer. In addition, he has written essays and horror stories. His book, Letters to the Editor of Cthulhu Sex Magazine, came out in October 2019. Recently, his likeness has been seen on film in the documentary, "Tai Chi Club" and heard on radio for the experimental improvisational music show "Improbable Confetti". He has performed as an unspeakable horror from the depths of the ocean as well as helped to produce Broadway and Off Broadway theater. He is visible using the virtual spectrum of social media by following him on Twitter @obaer and/or Facebook https://www.facebook.com/obaer3 Much of his work can be found at http://tentacularity.wordpress.com

We need works like Technelegy to help us mediate the complex relationship we have with technology—to go beyond the terror or shame that proliferates in media reports.