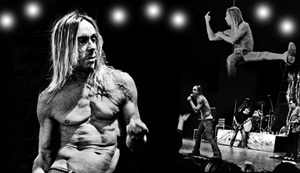 Just when I thought I’d finally turned the corner in my post-foot-surgery convalescence, I developed a staphylococcus aureus infection. You might know this as a “staph” infection. In laymen’s terms, my left foot blew up like an itchy red balloon and became, shall we say, “uncomfortable” to stand on. But alas, I had an Iggy Pop show to attend and that is a spectacle I would have given my left foot to witness. And this wasn’t just any Iggy show—no, this was a Stooges concert, and the first in Manhattan since the early 1970s. On the list of acceptable treatment options Dr. Rock (yes, that’s his real name) gave me, I’m fairly certain that attending a Stooges show was among the least recommended. But to see the original Detroit punks in an old theatre-turned-church in Washington Heights was more than I could resist—there was no way I was going to miss it. So I grabbed my cane, gulped down a handful of antibiotics and painkillers, and hobbled over to the subway.

Uptown, the crowd of oddballs came streaming out of the A-train station at 175th St. like a hipster ant trail and flooded the intersection at Broadway—to the bewilderment of the neighborhood locals, who must have suspected something sinister was afoot. There was a determined buzz in the air, though the displaced downtowners didn’t really know where they were going. (This was only the second rock concert ever booked at the United Palace Theatre.) They stumbled around dressed in black, wondering where the venue was. As they eventually filed into the ornate theatre, security was refreshingly light and friendly. On the gilded lobby walls beneath twinkling chandeliers were religious aphorisms from the good Reverend Ike. This was clearly not Roseland.

When the stage lights dropped out, Iggy could be seen in the shadows bouncing around behind a stack of amps like a wound-up boxer gearing up for a fight. The band strolled out looking ready to rumble, and Iggy bounded to the mic wearing only skin-tight jeans and black boots. The group announced its intentions by plowing into a fierce version of “Loose,” and the entire theatre seemed to lift off its moorings with the thunder of it. It was an inspired choice for an opener. My foot throbbed as I leaned against my wife for support. It was hard and loud, and the crowd went nuts.

From that jumping-off point, the mostly original Stooges lineup of Iggy, Ron and Scott Asheton, Funhouse saxophonist Steve Mackay, and former Minutemen bassist Mike Watt (replacing the late Dave Alexander) reeled off tune after dirty tune. “Down on the Street” followed by “I Wanna Be Your Dog” followed by “TV Eye”—they just kept coming at us. Iggy sneered, howled, crooned, and gyrated like a lunatic on a bender, contorting his body in remarkable ways. After introducing “I Wanna Be Your Dog” with barks and yelps, the fifty-nine-year-old with the body of a gymnast did a full face-plant stage dive into the orchestra pit. Twice! The band never so much as flinched, but kept jamming heavily throughout as Iggy scrambled back out of the crowd glistening with sweat and then leapt back onto the stage with a slight limp in his gait to do it all again. He hurtled around the theatre all night with no letup.

The United Palace Theatre in Washington Heights is not a new venue by any means, but most of the action it’s seen in the last thirty years has been in the name of Jesus. The former Loews movie theatre, built in 1930, has been the home of the ministry of Frederick Eikerenkoetter, aka Reverend Ike, since he bought it in 1969. But two generations later, up stepped the same Bowery Ballroom promoters that revived Webster Hall; they made the good Reverend an offer he could not refuse and, lo and behold, Washington Heights joined the alt-rock circuit. The year the theatre became a church the public at large was still sifting through Paul Is Dead clues. It also happens that 1969 was the year of the big bang that was the debut record by Iggy Pop and his raucous band of Stooges. Thirty-eight years later the twain finally met on 175th St. and Broadway, and the Lord was frightened. Or maybe elated—it’s anybody’s guess.

On stage, the Stooges displayed the nihilistic intensity and taste for puckish mayhem that has been an influence on countless younger bands—AC/DC, the Ramones, the Sex Pistols, the Damned, and Mudhoney (among many others) all followed in the sonic wake of this group of juvenile delinquents from Michigan, who inadvertently created the blueprint for every fringe rocker who has needed to stir up a little shit in the ensuing thirty years. But Iggy, born James Osterberg and raised in a trailer park in Ann Arbor, wasn’t always a wild man. Before the drugs and hell-raising he was a member of the student council. He was clean-living. He was a drummer. He worked at a record store, where he met the Asheton brothers, and that’s where the trouble and the thrill-ride began. With a Bo Diddley backbeat, buzzsaw guitars, and stomping drums, the Stooges turned the blues-rock format of the day on its head. Seeing the Doors perform in 1967 at the University of Michigan, Iggy was stunned by the antagonism of Jim Morrison and didn’t know that someone in a popular band could get away with pushing buttons like that. Later, while inventing the stage-dive in Detroit, rolling around in broken glass, exposing himself to the crowd, and vomiting on stage, among many other exploits, Iggy would blow a few minds himself.

At the United Palace, forty years later, he kept demanding the lights be put up so the band could see the crowd. “We have eyes too, you know—we can see you.” In the spirit of Reverend Ike, but with an extra effort to close the gap between himself and his congregation, he shouted out exhortations to the audience throughout the night. “We accept you!” he yelled at one point (a Ramones reference?). While introducing another song from Funhouse he asked, “Does anybody ever make you feel like dirt? Me too. Well if they do, at least you’re down-to-earth.”

As the set gathered steam, with the band chugging away at “Real Cool Time,” Iggy incited the crowd to rush the stage. “Get on up here and invade some space! Fly!” In a flash, dozens of fans swarmed down the aisles and clawed their way over the lip of the stage. With my Vicodin wearing off, all I could do was stand and stare. Iggy kept waving ecstatic fans up to the stage as the band transitioned into “No Fun,” which actually became a hell of a lot of fun as at least a hundred people took over the performance space without the Stooges missing a beat. One by one the people scampered over to put their hands on Iggy the Legend, a twisted idol with greasy blonde hair. He soldiered on, shouting into the mic as a mosh-pit formed on the very stage itself with one guy being passed over the heads of the others, in danger of falling into Scott Asheton’s drum kit.

As Reverend Ike might say, it’s a miracle that Iggy Pop has not only survived the decades of excess and self-destruction but continues to perform with an energy level that is hard to fathom from a guy who is older than the president. Although he purports to limit his indulgence to a couple glasses of Bordeaux these days, with the Stooges backing him up again there is no telling what sort of antics we’re in for down the road. After hearing that Keith Richards managed to snort his own father’s ashes with cocaine (a claim that Keef tried desperately to backpedal from later), Iggy might even take it as a “professional challenge” and feel the need to raise the bar again.

Audibly limbering up in an adjacent room in this heavily white-painted, minimalist Cologne church, the NYC alto saxophonist and multi-layering composer Lea Bertucci was appearing at Week of Surprise, formerly titled Night of Surprise. Innate saxophonic reverberation qualities rippled and bounced around the corner, through the doors, into the performing space, and Bertucci hadn’t even started her set yet…

Apart from brief excursions into the subway or the city’s parks, this artist shoots her videos entirely in her home

Standing on the sidewalk, peering into this Chinatown storefront around the corner from the Lam’s apartment, the exhibition invites the viewer to imagine that other families much like this one exist in similar apartments all around, if one could only see through the walls.