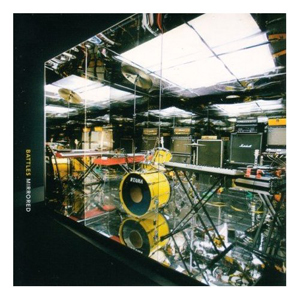 Unlike in the 1950s, when the mere chance to be in a musician’s presence was enough to draw a crowd, I go to live shows for inspiration in exchange for my eardrums and spectatordom—something more than just hearing a band’s album played louder. There was a time when characters like David Bowie were pushing musicians to exert some showmanship, a pattern that lasted well into the nineties with bands like the Make-Up, who demanded crowds’ attention by crawling over them. I almost fell asleep at a Sea and Cake show in 2003, and since then I’ve needed a powerful incentive to get me out to see live music—be it costume changes, novelty, or loyalty to a friend’s band—even for artists that I like on record. Audiences are thirsty for performers. I know showmanship isn’t dead, as evidenced for me by Jamie Lidell, who throws a few loops together and dons a golden robe while conjuring soul greats. But it is certainly on the decline.

With a performance by the Brooklyn-based group Battles, combining the talents of solo artist Tyondai Braxton and former members of Don Caballero (Ian Williams), Helmet (John Stanier), and Lynx (Dave Konopka) into a motley assemblage of sound, I knew I wouldn’t be disappointed aurally; stage demeanor was the only question mark. Helmet was such a larger-than-life presence in the nineties that they were genre-defying: Some people would say they played metal for the fans of hardcore. Don Caballero and Lynx took unexpected turns with sound and played with time signatures, and thus have been christened with the heavier label of “math rock,” a term reminiscent of “existentialist.” (Albert Camus was unwilling to accept the existentialist title—and no more now than when the term math rock flowed more freely from people’s lips would a band be eager to describe themselves as such, for fear of being dismissed as pretentious.)

Math rock seemed like a modern reaction to the death of progressive rock. It can be attributed to an obsession with gadgetry, a desire to tamper with and tweak every element, verging on obsessive-compulsive—a geekish sound. The name eventually morphed into a tag poking fun at the overly complex nature of certain strains of rock music—music that is, after all, supposed to be fun. Most bands would rather their complexity result in a clean simplicity; they want to make it sound easy.

Listening to Battles’ EPs as they slipped out one by one over the course of two years (they were rereleased together as an album by Warp Records in February 2006), I heard a heavy Don Cab influence, but maybe I was looking for a resemblance. There are more electronics in use on a Battles record, and there is a coldness that Don Cab avoided by employing clever song titles and warmer keyboard interjections. The EPs are evocative of sixties film soundtracks—video-game playful yet atmospheric.

I read somewhere during this time that the band was looking for a singer. I felt myself blush at the thought of trying out for the position, but I was reluctant to accept the idea of a singer in the band’s mix. Their sound is a tinderbox, usually becoming monumental quickly: big, arena-style drumming, noise accumulation building into a large-scale sound-attack. (Listen to the song “Hi/Lo” from EP C for a prime example.) Battles relies heavily on electronic devices: looping machines, keyboards, and humans mimicking the nature of these contraptions with robotic, repetitive drumming and clanging guitar. A vocalist would have to be a machine to fit in.

Mirrored, the new album due out this month, does in fact feature vocals disguised by a Vocoder. Braxton (son of avant-garde jazz composer and saxophonist Anthony Braxton) is behind the mic, whistling and looping his voice, which at times is so warped that he sounds as if he’s inhaled helium. The vocal element becomes an instrument—or in other words, you can’t understand a damn word, and that is the point. The sound on Mirrored is more rehearsed and assembled than on previous records—more layers to sift through, more reverb, and then a song like “Atlas,” the first single from the album, which seems ready for use as a crowd-fluffer at a futuristic basketball game.

I went to the band’s sold-out show at the Bowery Ballroom on April 3 as an introduction to the then-unreleased album, which I hadn’t yet heard. Opening the show were the drone band Soft Circle and Prefuse 73, another band on the Warp label, who reaffirmed for me the uselessness of seeing certain bands live: three guys behind a table full of devices, shouting obscenities hip-hoppishly, introducing and reintroducing themselves, and recreating their albums live, only louder. Then Battles opened their set with a song I didn’t yet recognize as “Tij” from Mirrored, and the crowd was revived, thankful to finally see what they came for. When they played “Atlas,” the crowd bounced knowingly. A few older songs were in the mix, but this felt primarily like an introduction of Mirrored to New York.

The EPs sound spartan compared to their newest counterpart. If I close my eyes and listen to the first track on Mirrored, “Race In,” it sounds like the whole band is playing from within the bass drum. Each song is a sonic bubble, watching the frantic fragments of our lives as it floats overhead. In that way it is a success—every song on the album bursts with energy. There is a less serene urgency here, as heard in “Ddiamondd,” which makes me think of the moment when my cat runs out of the apartment and down the stairs, and I’m just behind on the chase. The highlight of the album is “Rainbow,” because it recalls the kind of prog rock that at one time had some credibility. The strength of Mirrored lies in its ability to experiment with forgotten forms—though I do sometimes miss the simplicity of the EPs.

Battles performances tend to be very egalitarian. Williams offers a conductor’s hand from time to time, and maintains a Stephen Malkmus–like composure. However, Braxton presides over more devices and engages in keyboard duels with Williams, while each also has a guitar slung over his back like a weapon—or both musicians play both instruments simultaneously. Stanier’s drums are set prominently at the front of the stage, and feature a precociously high cymbal—which reminds me of Shellac’s drummer, Todd Trainer. In fact a Chicago style permeates the Battles experience—sometimes Tortoise is conjured, other times it’s the drum-heavy, angular, and spontaneously urgent nature of bands like U.S. Maple.

What Battles seems to want is a clean break from the labels hanging around their necks. Sure, they’ve carried over influences from their previous lives—even though Braxton states that he isn’t much of a jazz enthusiast, he has clearly learned a thing or two from his father. But Battles is, in their own words, “a modern band,” meaning that they feel at home in any number of disparate styles. With their music, you aren’t sure sometimes whether to dance, march, or count beats (My favorite time to listen to Battles is walking in New York when in a hurry).

In seeing Battles perform, I was hoping for an aggressive musical intervention; I wanted to remember why I enjoy seeing music live. The show did not fully hit the spot. I was mesmerized by the precise and methodical nature of the songs, but the four band members sometimes seemed too much like the machines they were using to create their wall of sound. They were deeply immersed in their performance, but didn’t share any words with the audience and didn’t bother with overt visuals. In that way they made me question the difference between pressing “shuffle” on my iPod or watching a video versus holding a beer and hoping for all of the pieces to come together on the spot right in front of me. For Battles, touring a new album before its release made this show a novelty. But even with the music available on CD and something lacking in the live performance, there will always be those who want to go see an artist on stage, period. It is my hope that more “recording” bands will be inspired to perform their music live.

Tiona Nekkia McClodden: The Trace of An Implied Presence

Tiona Nekkia McClodden’s The Trace of An Implied Presence features an ambitious multimedia installation that follows the living history of contemporary Black dance in America.

Hand Me the Limits

Ted Rees is the author of numerous books and chapbooks, the most recent being Dear Hole (Shmekl Times 2022) and Dog Day Economy (Roof Books 2022). He lives and works in Philadelphia.