David Del Tredici at the Brooklyn-Queens Conservatory of Music 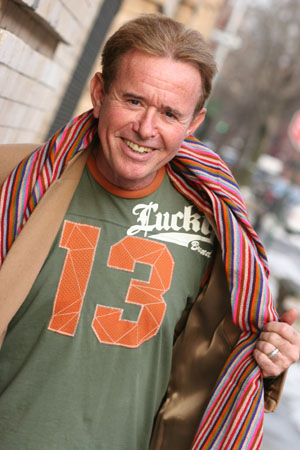 American composer David Del Tredici, often referred to as “the father of Neo-Romanticism,” writes music that is full of sentiment and humor. A masterful orchestrator and a wizard at setting music to text, he composes with a clarity of ideas, both musical and social. His music is at times subtle and refined, at others blatantly over-the-top. A strong sense of theatricality infuses his work, instrumental and vocal pieces alike. It comes as little surprise, then, that it is best heard live, as I discovered this past March 17 at his seventieth-birthday celebration concert, which featured two theatrical compositions, a solo piano piece, and an interview with his former student Theodore Wiprud. The atmosphere was intimate as friends and family gathered in the small performance space at the Brooklyn-Queens Conservatory of Music. The concert began modestly with a set of piano pieces entitled Three Gymnopedies (“indebted to Satie”), written in 2003. Gymnopedie No. 1, entitled “My Goldberg,” is a variation on the bass line of Bach’s Goldberg Aria. It is perhaps the most Satie-like in its evocations of nostalgia, which Del Tredici develops with bursts of sentiment. Gymnopedie No. 2, reminiscent of Debussy, was dreamy and romantic, as pianist Marc Peloquin made great use of both sustain and soft pedal to create a sense of being underwater. The final Gymnopedie was the longest and perhaps the most complex, evoking a sense of nostalgia in a different way than the other two—with mystery and intrigue. Peloquin again did a fantastic job with crystal-clear voicing, as he punctuated the strong harmonic backbone with odd dissonances.

In the second piece, Chana’s Story, written in 1998 and based on the poetry of Chana Bloch, we experienced Del Tredici’s virtuosity at the piano as well as his ability to home in on the essence of a text and extract its meaning. It is a set of six songs for mezzo-soprano and piano that follows, from a woman’s point of view, the transformation of her romantic relationship with a man, from ecstatically in love through a gradual separation. The singer, Re’ut Ben Ze’ev, gave a brilliant vocal and acting performance. Her efforts were spirited and convincing as she deified the male body (with quite some detail, I might add) in the opening movement, “The Fever of Love,” which presented an ecstatic though slightly twisted fantasy world. As the piece progressed, she captured the helplessness of a woman falling out of love, and had the audience hanging on every word by the last movement, which ended with the sadness of loss, but also the hope contained in the possibilities of change.

The final piece on the program was Dracula, a dramatic setting for soprano and thirteen instrumentalists of a poem entitled “My Neighbor, the Distinguished Count” by Alfred Corn, which tells the story of an unassuming woman (from her point of view) who is gradually seduced and ultimately transformed into a vampire by her eponymous neighbor. The piece opened with the sound of a wind machine, plucked string harmonics, and soft bells, setting a fantastic scene reminiscent of an old Hollywood horror film. A playfully dark bass clarinet melody introduced a woman dressed in black, played brilliantly by Melissa Fogarty, who sat on a red velvet chair and spoke frankly to the audience about her neighbor. As the story progressed, she made her way around the stage, at times playing the count creeping up behind the cellist’s shoulder, at others playing the frightened woman cowering in the corner, all the while switching between voices, from singer to storyteller. The performance was extremely powerful, the over-the-top theatrics, hair-raising effects, and colorful music at once hilarious and thrilling.

“Everyone has a secret music,” Del Tredici explained to his interviewer during intermission. “You just really have to listen, follow your instincts.” In the liner notes for his CD Secret Music, he elaborates on this notion, describing “a secret music” as “a musical event, or an enthusiasm—that [composers] enjoy, but think is irrelevant, shameful, or somehow ‘wrong.’ They think of it, too often, as a blemish to be removed, rather than a beauty spot to be cherished. Yet paradoxically, this can be the composer’s most original attribute—his vein of gold…his authentic self.”

Del Tredici’s own trajectory as a composer illustrates this concept perfectly: He was trained as a serial composer in the late fifties and early sixties, writing atonal music because, as he puts it, “every young composer wants to be bad.” During the sixties, he started developing his own sense of tonality that introduced the whole-tone scale into a music of highly organized mechanical processes. During this period, he produced masterpieces such as Syzygy and Night Conjure-Verse (both set to poems by James Joyce), which have been praised by academics and romantics alike, while containing seeds of the sumptuous music of his future. Upon the recommendation of a friend, he discovered Martin Gardner’s The Annotated Alice, which opened up a whole new world for him: that of tonality. The text is far more playful and narrative-driven than that of Joyce’s dark modernist poetry, seeming to urge him to write “wholesome, more energetic” music, and break out of the “green horrifying fog” of modern academic composition. Bravely, he forged ahead. He kept to himself for a while, remaining true to the Alice texts that he was setting (which he did to the point of obsession for about twenty years), nervous about sharing his music with colleagues, afraid they would dismiss his music and call him crazy.

On the contrary, in 1980 he won the Pulitzer Prize (notorious in music for being a prize given to academics by academics) for In Memory of a Summer Day.

Del Tredici’s music goes against the grain of unconventionality: At a time when it was taboo to write in the tonal idiom associated with older music, he followed his native impulse. But he has been revolutionary in another important way. He is among the first gay composers to openly celebrate his sexuality with his music, which he does primarily by setting homoerotic texts to music. He seems to be reacting to a long history of shame associated with sex, recognizing that social taboos have had their strongest hold on gay culture. Although many composers have been gay, few, if any, have shown it in their music, and some have been inclined or even forced to keep their sexuality to themselves: Virgil Thompson and Henry Cowell were arrested on separate occasions for homosexual activities, and Cowell even spent four years in San Quentin State Prison (where he wrote nearly sixty compositions) after being convicted on a “morals” charge.

With his Alice music, Del Tredici was dealing, in a sense, with the closeted Victorian way of life, as the texts arguably deal indirectly with Carroll’s repressed love for a young girl. Whether conscious or not, there is a clear parallel linking the subject of these pieces to the struggles of gays living in an intolerant society.

I n the mid 1990s Del Tredici took another step in the direction of dealing directly with gay-rights issues, as he started to get interested in explicitly sexual gay texts. At the same time that he is working in the idiom of traditional Western classical music, he has been, on a social level, challenging the social norms of the conservative music world. After being commissioned to write a new, non-Alice-inspired piece for the San Francisco Symphony, he came up with Gay Life—the title of which he was asked to change to San Francisco Songs, a request that he refused. On another occasion his work Wondrous the Merge was scheduled for its premiere at the Great Lakes Chamber Music Festival in June of 2003. The festival’s artistic director James Tocco, himself openly gay, had agreed to present this new piece for baritone and string quartet, knowing all along that it involved the love between two men. However, upon reading the text to be sung, a poem by James Broughton, Tocco decided that it was unfit for a family audience, and had the musicians perform an edited version. Del Tredici has also faced enormous difficulty in getting his song cycle My Favorite Penis Poems performed. Without the funding of typical concert hall organizations, he has sought financial support from such organizations as Pfizer (the maker of Viagra) and the Museum of Sex in Manhattan.

Del Tredici’s music has outraged some concertgoers, but it has delighted many more. In the long run, it may help to inject a more irreverent attitude into the staid “serious” classical music scene. This has happened before, musically speaking, with composers like Cage, Stockhausen, Varese, Boulez, and Cowell. However, there is clearly still some progress to be made on a social level. Del Tredici is making his way along that path, all the while staying true to his musical impulses.

Sergei Tcherepnin is a composer/performer of new music currently based in Brooklyn.

Jen Shyu and the Music of Loss

There are those times when one encounters talent that goes beyond normal experience, talent that is a pleasure to witness but difficult to grasp—like grabbing smoke, the standard tools are inadequate. That's what it's like at one of Jen Shyu's performances.