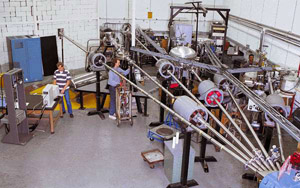 Who can imagine New York City without the Mission burrito? Like the Yankees, the Brooklyn Bridge or the bagel, the oversize burritos have become a New York institution. And yet it wasn’t long ago that finding a good burrito in the city was impossible. As the 30th anniversary of the Alameda-Weehawken burrito tunnel approaches, it’s worth taking a look at the remarkable sequence of events that takes place between the time we click “deliver” on the burrito.nyc.us.gov website and the moment that our hot El Farolito burrito arrives in the lunchroom with its satisfying pneumatic hiss.

The story begins in any of the three dozen taquerias supplying the Bay Area Feeder Network, an expansive spiderweb of tubes running through San Francisco’s Mission district as far south as the “Burrito Bordeaux” region of Palo Alto and Mountain View. Electronic displays in each taqueria light up in real time with orders placed on the East Coast, and within minutes a fresh burrito has been assembled, rolled in foil, and dropped down one of the tubes that rise like organ pipes in restaurant kitchens throughout the city.

From there it’s a quick dash across San Francisco Bay. Propelled by powerful bursts of compressed air, the burritos speed along the BART tunnels to their final destination, the Alameda Transfer Station, where they will be prepared for their transcontinental journey.

Scientists since Newton have known that the shortest route through the Earth’s interior is a straight line. Through the magic of gravity, any object dropped into such a “chord tunnel” at one end will emerge 42 minutes later at the other. But only at the start of the 20th century did the idea become technically feasible. To this day the tunnel linking the East Bay with New Jersey remains the only structure of its kind in the world.

From the outside, the Alameda facility looks like any other industrial building. Underground, however, lies a converging nexus of burrito pipes. High pressure pneumatic tubes from all over the Bay Area emerge in the center of the facility, spilling foil-wrapped burritos onto a high-speed sorting line like oversize bullets arranged in belts of delicious ammunition. Within seconds of arrival the burritos have been bar coded, checked for round, and flash-frozen in liquid nitrogen.

The burrito launch tube lies just under the tunnel mouth and looks like what it is: an enormous gun. Every four seconds a ‘slug’ of ten burritos, white with frost, ratchets into the breech. A moment later the lights dim briefly as banks of powerful electromagnets accelerate the burritos to over 200 miles an hour. By the time they pass Stockton three minutes later the burritos are traveling faster than the Concorde.

No one who built the Alameda-Weehawken tunnel had this future in mind for it. In 1911, the celebrated British civil engineer Basil Mott approached city fathers with an audacious plan to build a straight-line tunnel connecting New York City with San Francisco, allowing packages to be sent between the two cities using only compressed air and gravity. Construction began in 1913, and the tunnel quickly grew into the largest public works project in the young nation’s history. Drilling required over 19 years of continuous effort by thousands of miners, often working in conditions of intolerable confinement and heat.

When the tunnel opened to great fanfare in 1933, however, it was already obsolete. It could not compete with the sophisticated air mail system that had grown up during the many years of construction. And breakdowns in the tunnel were frequent, especially in the central “hot zone” where temperatures could exceed 900 degrees Centigrade. In 1936 the tunnel ceased operation less than three years after it had opened.

By the early 1970’s the tunnel was abandoned and decrepit. The turning point came when Robert Cavanaugh, a New York financier with a serious taste for Mexican food, happened to come across a mention of the tunnel in a zoning proposal. Cavanaugh became intrigued by the coincidence in size between a foil-wrapped burrito and the diameter of the old transcontinental mail tubes, and soon came up with an audacious plan.

The intense heat of the transit would now be an advantage. The burritos could be stored frozen on the Western end and arrive heated-through in New Jersey. Furthermore, advances in electrical engineering meant that containers no longer had to be propelled by gas. And it would be trivial to accelerate the foil-wrapped burritos with magnets instead.

Convincing others proved to be Cavanaugh’s biggest challenge—it took six months to persuade suspicious taqueria owners to switch to a salsa with lower magnetic permittivity. But by July of 1979, all the pieces were in place. After a successful dry run with a sawdust mock burrito, the tunnel ceremoniously opened on Independence Day. The inaugural burrito (carnitas with lettuce, salsa and avocado, no beans) was loaded into the breech at the Alameda terminus at 10:05 AM and arrived intact to thunderous applause 64 minutes later. A new era had begun.

Burritos speeding through the tunnel fight a constant battle against friction. At the start and end of their journey they hover in a powerful magnetic field, seldom touching the sides of the tunnel. Past the Colorado border, however, the temperature of the surrounding rock exceeds the Curie point of iron and the burritos must slide on their bellies, kept from charring by the pork fat that slowly seeps out of them as they thaw.

By the time they reach Cleveland, the burritos are fully heated through and traveling uphill at about twice the speed of sound. A series of induction coils in central Pennsylvania repeats the magnetic process in reverse, draining momentum from the burritos (though Weehawken residents still recall the great blackout of 2002, when computers running the braking coils shut down and for four hours burritos traced graceful arcs into the East River, glowing like faint red sparks in the night).

A final puff of air at the tunnel exit slows the burritos to a stop, and they are whisked to a fleet of waiting trucks, then onward to restaurants throughout the five boroughs.

Is it worth it? Enrique Alnazar, burrito sommelier for Nobu Fifty-Seven, smiles at the very question. The restaurant recently installed a dedicated high-speed pneumatic line to the Weehawken facility, shortening the arrival time for its prize Los Charros burritos to just under 50 minutes. Alnazar won’t say how much the new line cost (estimates run into the millions of dollars), but he insists it was worth every penny.

“We’ve had people come in and order a magnum of 1978 Château Margaux on the strength of our burritos. They know that we’re phoning in their order to Mountain View the moment they walk in the door, and they know we’ve done everything in our power to keep them from waiting. A lot of restaurants are happy racking up a few days’ supply in the burrito cellar, but that’s not the same as getting a fresh burrito straight from the tunnel—you can taste the difference.”

The success of the burrito tunnel has encouraged no end of imitators—whether the Northeastern chowder viaduct or the recent fiasco of high-speed BagelRail. But as Chairman of the Bay Area Burro and Burrito Council John Laplace argues, it’s unlikely such a project could succeed anywhere else. “We really have a unique situation here—a population of 15 million people without access to high-quality Mexican food. And on top of this you have the burrito itself, which is a really marvelous food—resistant to overheating, isotropic, compactable to tolerate high G forces.” Here Laplace smiles. “And delicious. Who would want to live in a New York City without it?”

Maciej Ceglowski is an oil painter in San Francisco. This piece is adapted from his blog, idlewords.com.

Ceglowski is a painter and computer guy.