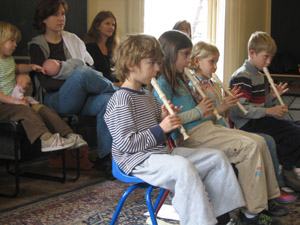 Recorder Class at the Brooklyn Conservatory of Music. Photos courtesy of the author. 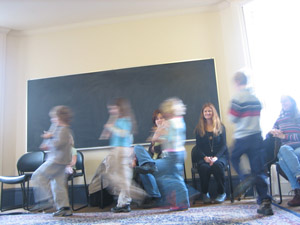 Recorder Class at the Brooklyn Conservatory of Music. Photos courtesy of the author.

“We ran so fast,” nods three-year-old Benny emphatically as he tumbles, sweaty and breathless. A small boy with a mop of curly hair grabs him and they both fall on the ground with a squeal before zooming off into the crowd of families gathered at a children’s soccer practice for the New York City Home Educators Alliance (NYCHEA)—a.k.a., the home-schoolers.

The next day, a perky seven-year-old in pink wellies asks, “Mommy, are we going to the park after?” When answered in the affirmative, she and her friend leap in the air. “Yesssssss!” they hiss at each other before turning their attention to the music teacher entering the airy classroom at the Brooklyn Conservatory of Music. It’s noon, and some NYCHEA members have gathered for their weekly recorder lesson.

“Leave out all the Bs,” the teacher instructs later in the hour. The six children in the class play their tune again with long pauses where Bs would have been, and a four-year-old sibling in the back uses her doll to smother her giggles when they mess up.

The reasons why New Yorkers might choose to home-school are much discussed these days: kids thrive with one-on-one teaching; the best public schools fall in the most expensive zip codes and the lesser ones pop up in the news too often with fresh reports of poor test scores or violence; private schools charge life-altering tuition fees and their acceptance rates are ominously low.

Better socialization, however, is not usually one of the benefits people associate with home-schooling. In fact, Benny’s mother, a writer and academic in Soho, says that when parents like herself tell other people they have chosen to home-school, the knee jerk response is, “What about friends? How will your kid deal in the real world?”

Talking to parents in New York’s diverse and growing home-schooling community, these worries seem irrelevant and out of date. “Schools are so antiquated now,” says a mother and NYCHEA member in Williamsburg. “Schools are always the last thing to change as a society evolves.”

Far from standard notions of home-schooled children as shy and awkward, home-schooling parents in New York think that the experience they’re offering leads to more proficient, socially nuanced, and comfortable children who are better prepared for their cosmopolitan surroundings

According to the New York City Department of Education Central Office of Home Schooling, over 3500 families in the city home-school their children, and about 250 of those families belong to NYCHEA. Elsa Haas of Staten Island, a former translator and mother to eight-year-old Tyler, describes the NYCHEA community as “very supportive in terms of friendship, things to do, and varying but tolerant perspectives on how to approach home-schooling.”

Haas describes herself as an “unschooler,” a subcategory of home-schooling where she lets her son’s passions and interests guide his education. “We want Tyler to be able to spend his time answering his own questions, not some teacher’s,” says Haas.

Other members of the NYCHEA community stick to what Haas describes as more of a “school at home” regimen. A clinical psychologist and mother of five in Flatbush says she follows the New York State grade level curriculum “to the word.” Haas says that most families follow an approach between these two extremes.

Despite the pedagogical differences at play, most parents say the home-schooling community is supportive and accepting—even thriving. “We live in New York,” says a NYCHEA member and mother of four in Carroll Gardens. “By the time my kids start high school, they can take science from scientists at the Natural History Museum. Every major museum and institute here has classes. One of my teenage daughters is interning at the Cooper Hewitt.”

“I think it might be the best city on Earth in which to home-school,” says a mother of two in Park Slope.

It seems that NYCHEA takes full advantage of everything New York has to offer. Like the weekly soccer practices, the Alliance runs its own events, including Playwriting for Teens, the Teen Film and Drama Club, Algebra and Geometry courses for 12 to 18-year-olds, and regular field trips—this month to a Classical Music Hall of Fame performance at NYU and to a recital of “Peter and the Wolf” at Hunter College. NYCHEA also holds monthly meetings where families get together and children participate in recitals and other activities.

Of course, some might argue that children attending traditional schools participate in all these activities and more. “That may be so, but within the home-school community, children and parents can pick and choose,” says the mother in Soho. “Because you’re not constrained by school hours, you can go to art appreciation at the Met every week when it’s quiet, you can follow your child’s new fascination with butterflies and not wait for a teacher to decide it’s that time in the curriculum. Perhaps you can even go to Mexico to work on Spanish when the flights are cheapest.”

In spite of the freedom and adaptability that can come with home-schooling, some parents appreciate that certain sacrifices are also made. Home-schooled kids don’t necessarily learn to sit in a seat or wait in line patiently, says an unschooling father of two in Williamsburg. They may not be as independent as traditionally schooled kids their age, says a home-schooling mother of one in Kensington.

These concerns have led some parents to consider cooperative home-schools so that children can experience more group learning. “I’ve fantasized about that,” says one mother. “I heard there was a guy doing a pre-K cooperative somewhere in Brooklyn. The legalities are okay when they’re that young. Technically it’s a babysitting service. But later, it’s inspections and time restraints. And talk about not-for-profit hell. The complaints department would have to be open round the clock. ‘My kid’s allergic to nuts. Someone was mean to my kid yesterday. My child’s too smart for this place,’” she says.

But some New Yorkers are pulling it off. One parent interviewed for this piece mentioned three Brooklyn families, each with five children, who share their educational responsibilities. “One of them will take the toddlers off, and the older children share foreign language and music classes. They’ll hire an outside teacher for specific courses like ceramics.”

For the most part, however, home-schooling New Yorkers are satisfied working with their own children in their own way, augmenting learning with peer activities for their kids through NYCHEA and other associations in the city. Home-schoolers interviewed said they also socialize their kids into the adult world. “We live in a student dorm,” says Benny’s mother, whose husband is an MD and NYU professor. “Benny comes to regular book groups, readings, and cinema trips, and he’s only 3 &frac12;. But I like that he spends his days with people of all ages, as he will when he’s an adult, instead of being cordoned off with 30 other people of his exact age.”

One mother has noticed how traditionally schooled kids tend to categorize one another at the beginning of friendships, asking “‘What grade are you?’ before anything else.” She’s also noticed a tendency in her daughters’ schooled friends to bully.

“I just want my kids to be civil, compassionate people. I don’t think traditional school teaches that at all,” says the father in Williamsburg. “Bullying and competition thrives at school, as much as they try and stop it. Shyness and low self-esteem? That’s the kind of socialization I can do without.”

A study reported in the Peabody Journal of Education in 2000 found that problem behaviors—arguing and aggression, shyness, not paying attention, and showing off—occurred eight times more often in traditionally schooled children than in home-schooled children. It seems that many New York City parents are hoping that the more eclectic, non-traditional, and self-made communities in which they raise their children will prove the study true.

Benny’s mother is one such parent: “I think New York City can produce good kids,” she says, “if only we let them go out and experience it.”

This novel’s sonorous title, we learn towards the end, comes from the Catholic Confirmation liturgy: a prayer out of Europe, hundreds of years old. Yet before we finish the book’s first page, we know that the children in question come from central Africa, and that what scattered them was a latter-day genocide. Not quite thirty years ago now, Rwandan Hutus slaughtered their Tutsi neighbors mercilessly, in perhaps the world’s ugliest recent outbreak of tribal hatred.

No COLA, No Contract:
On the Ground at the UC Strike

By Zach Hicks and Rebecca Gross

On November 14, following the largest Strike Authorization Vote in the history of higher-education unionism, some 48,000 academic workers across the University of California system went out on strike.