The cliché tells us that home is where the heart is. But it is more than that. Just ask someone who is threatened with losing theirs, like Evelyn Suarez. 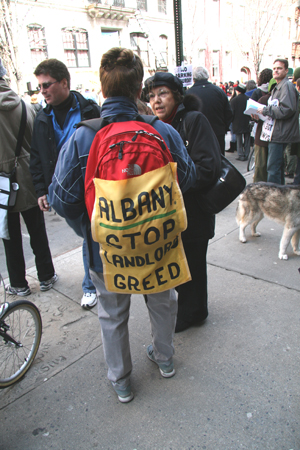 Suarez has lived at 533 Bergen Street in Prospect Heights, on a quiet block alongside the 78th Precinct, Girls and Boys Town New York, The Bergen Family Health Center, La Iglesia Evangelica Latina, and dozens of low-rise apartment buildings, for 28 years. Although the dwelling is not fancy—there is graffiti in the entryway, the halls are dingy and the carpeting in the public areas is filthy—Suarez says that she is comfortable and has no desire to leave.

Yet if the building’s owners have their way, she and her family—two children and a one-year-old granddaughter—will be booted out of their $402 a month unit and left to fend for themselves in Brooklyn’s continually-escalating housing market.

“My oldest was two-years-old and my son was a couple months old when I moved in in 1979,” she says. Two more children, a son born in 1991 and a daughter born in 1986, have spent their entire lives in the three-bedroom unit.

The conflict began in October 2006, when Suarez, a 49-year-old colon cancer survivor, got word that her lease would not be renewed by the building’s new owners. She immediately went to the Fifth Avenue Committee, met with tenant advocates, and was referred to South Brooklyn Legal Services attorney Brent Meltzer. Suarez knew that other tenants has received similar notices; in fact, as the tenants conferred, they discovered that owners Dan Bailey, Felicity Loughrey, Deanne Cheuk and Andre Wiesmayr intended to obtain five of the building’s eight units for the personal use of Bailey, Loughrey, and their two children.

The plan, says Brent Meltzer, is to convert two-and-a-half floors—3,000 square feet—into one, multi-tiered apartment. Architectural plans submitted to the court reveal an elaborate design: a living room, dining room, and laundry and storage areas on floor one; two bathrooms and four bedrooms on floor two; and a guest room and den on floor three.

“It’s not right for them to come in here and take people out of their homes,” Suarez says. “Apartments are not cheap. If I have to leave here, I’ll have to go to a shelter. I don’t want to impose on anybody and I can’t afford $2,000 a month for rent. I saw Mr. Bailey a few weeks ago and asked him why he didn’t find an empty building. ‘For my family,’ he said. Well, I have a family, too. What about my family?”

The key question, says Meltzer, is whether apartments that presently shelter 15 people should be turned into a mansion for two adults and two children. “At some point you have to ask, when is enough enough? Look,” he continues, “I’m not trying to ruin Bailey and Loughrey’s dream. They can buy a vacant lot and build, or buy a vacant building and renovate. They don’t need to displace to develop.”

Bailey and Loughrey declined to be interviewed for this article and their attorney did not return my calls, but it is clear that they are relying on a provision in the Rent Stabilization Law and Code that allows owners to initiate eviction proceedings if they want one or more units for their personal use.

That concept got a boost in February when the New York State Appellate Division unanimously declared Brooklyn landlords Catherine and Alistair Economakis the victors in their attempt to remove tenants from 15 apartments at 47 East Third Street in Manhattan, ruling that the law does not limit the number of units a landlord can claim for personal use. While the tenants plan to challenge the decision, for the Economakis’ the issue is simple. According to Alistair Economakis’ website, www.economakis.com, “the fundamental question is: who has a greater right to reside in a building, its owner or its rental tenants? I believe that the owner has a greater right to reside in his building than his tenants. The law provides this right and the courts have upheld it.”

They have already emptied six of the building’s units and, like Bailey and Loughrey, have submitted plans to convert the 11,600 square foot, 60-room, structure into a one-family home for themselves, their two children, and nanny.

“I think there is a principle here,” says David Pultz, a 29-year resident of 47 East Third Street. “The law never intended for a landlord to take over an entire building. We are all working people of moderate and middle income. These apartments are affordable for us. At one point when we went to court, the judge sat us down with the Economakis’. We traded offers back and forth and there was some attempt to give-and-take. Alistair offered us $20,000 each as a buyout but we didn’t ask for money. Instead, since we want to stay in our homes, we asked if we, as a tenant association, could buy the building or if he’d agree to turn it into condos so we could buy the apartments we live in.”

Both suggestions were refused. Worse, given the February Appellate decision, the tenants are increasingly uneasy about their prospects. Should the courts allow their eviction, they fear not only for themselves, but worry that owner use cases will become legion.

Dave Powell, a tenant organizer at the Fifth Avenue Committee, already sees this happening and blames the increase in owner use cases on the city’s seemingly-endless real estate boom. “We’ve seen the rapid gentrification of Ft. Greene and Park Slope in the last 10 to 15 years and certainly Atlantic Yards is serving to exacerbate that. Rent Stabilization laws are supposed to act as a regulatory force against displacement and eviction,” he says. “The owner use provision was not meant for landlords to create mansions in tenements. I have no empathy for people who are trying to circumvent these laws and remove desperately needed apartments from the affordable housing stock.”

During the last year, Powell has helped numerous tenants defend themselves in landlord use cases and quickly rattles off the locations: 268 Dean Street, 316 Sixth Street, 139 Nevins Street. Scott Miller, an attorney for two of the Bergen Street tenants, has seen several more and South Brooklyn Legal Services is representing tenants in a handful of others.

William Whalen of Municipal Employee Legal Services, a group that provides free legal representation to city workers unionized by District Counsel 37, has four more, all but one in or near downtown Brooklyn. While the numbers sound small, the trend is significant, Whalen says. “I’ve recently noticed a tremendous change in the nature of our practice. A few years back, landlords wanted their money. It was, ‘how much can you pay and when are you going to pay it?’ Now landlords no longer want the rent money. They want the tenant to move because at this point an empty apartment is worth more than an occupied one.”

Attorney Scott Miller agrees. “Atlantic Yards has been in the forefront of the news for three or four years. Since the development plan was announced, the number of owner use cases has skyrocketed. The area is hot and trendy and will only get more so. I have nothing against the owners of 533 Bergen but they don’t have to displace five families for the pleasure of one. It’s greed. It may be legal, but what’s legal and what’s fair are sometimes different.”

Whether judges will agree remains to be seen. The Bergen Street tenants expect to return to court within the next few months. Meanwhile, Dan Bailey, Felicity Loughrey and their children have moved into the building and currently occupy one second floor unit.

Alistair and Catherine Economakis are also continuing to hammer away at 47 East Third Street’s remaining tenants and have begun extensive renovations on the building. “We expect to move into 47 East Third as soon as renovations are complete,” Alistair says on his website.

For her part, Bergen Street tenant Evelyn Suarez is trying to remain philosophical. She has seen five owners come and go since 1979, and has successfully fought previous bids for her apartment. “We’re not rowdy people,” she says. “Everybody in the building gets along. Of course I’m angry. It’s too much. Stuff like this is why people flip out and kill each other.”