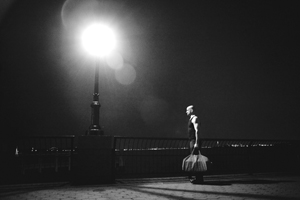 I was representing a 19-year-old homeboy who had beaten up an eight-year-old for his bicycle. He was late to court so I had to beg the judge not to issue an arrest warrant. He walked in like a total thug, but with his girlfriend following him holding his new baby. She whispered to me that he had just gotten his first job. I busted my ass to get him a good deal. But when homeboy walked, he called me a “Fuckin’ bitch” under his breath.

I started to question whether it was worth it for so little reward. So I went home that night and called an entertainment lawyer who represents New York independent film to Hollywood. The next day we were at lunch in SoHo talking about movie production and how I should take the California Bar. I got lucky and called at the right time: he wanted me to help open an office in LA and work on copyright and licensing for an upcoming project. When I got up to go to the bathroom, the waitress-actress gave me her number and asked me to go for a drink that night to see her head shots.

I grew up poor, my father in prison, my mom working double shifts at a diner in Albuquerque to put food on the table. I’ve protested, been arrested, organized, written five novels that have been rejected and basically failed at 98 percent of everything I’ve ever done. Now I would get to have a nice little white life. I could live in Los Feliz, drive a fine car and make movie deals. People may say I sold out, but I doubt they’ll be spouting Marx when they’re chilling in my Jacuzzi. And anyway, this is my life. It’s my time to experience American Success and Happiness.

The next week I met the lawyer and a famous actor for dinner in Tribeca. The actor and I made plans to play racquetball in LA, then meet his favorite screenwriter for cocktails at The Standard. I was on the inside of the inside, baby. I could see myself in that BMW convertible on the way to that party in the Hollywood Hills. I could feel the massage at the weekend spa in Santa Barbara.

After I told the attorney that I couldn’t work for him, I fell into a period of heavy thought about my life.

W hen the U.S government sent my dad to prison as part of the Drug War, we were destitute. My mom was left alone raising two kids, the IRS breathing down her neck claiming that she was liable for all of my father’s debts. The Albuquerque Sheriff’s Department constantly harassed us. We were drug people to them, trash. I was a 15-year old punk kid. My high school was more violent than the streets. I got in fights almost every day. I was tortured by thoughts of my father in prison. I was wracked by my failure to step up and help my mom. I was hate-filled, dying inside.

One night I was at this dude Grater’s apartment. He was a hardcore biker. He had nasty prison tattoos all over his neck. He sold speed and guns. There were four or five gang members hanging out at his pad. One came up with the idea of ripping off a liquor store. One guy would go in and make a distraction, then the other two would run in and steal cases of beer. I got pressured into going to steal the beer. I was so scared. I could hear my mom’s voice inside my head begging me to just please come home. Through sheer luck, we ran into some punks at a stoplight on the drive to the liquor store. They had acid so we went back to their house, tripped, and listened to The Misfits all night. I still get chills when I think about what could have happened, because a week later the driver of the car shot a convenience store clerk in the face. I could have been part of the commission of first-degree murder and armed robbery; had I been a few years older, I might have even gotten the death penalty. That I could have been strapped to a lethal injection machine is a realization that does not diminish over a couple cocktails.

While studying criminal law over the past couple years, I have learned plenty about the Death Penalty. I’ve seen how it’s making a vicious comeback in the South; how many states are intentionally under-funding defense counsel; how poor people are being beaten into confessions. There are constitutional violations that make 1934 look good, affluent communities that demand that someone, anyone be arrested, and right-wing judges who illegally schmooze with right-wing prosecutors. There are disparate charges based on the victim’s race, class, and economic background. And most important, I’ve read about the defendants themselves, who have been discarded by the state as worthless
human beings.

Beliefs are useless unless put into action. I contacted a group in New Orleans that fights off executions of death row inmates at Angola Prison. I flew down expecting the city to be in bad shape, but post-Katrina it’s a Third World country broken off from the rest of America. I walked for days and never saw a cop. I could feel the absence of government. I couldn’t find a grocery store. The 9th Ward remains in ruins. There are still those numbers painted on the outside of buildings showing how many dead were found inside. The Superdome is a monument to the American socioeconomic racist nightmare. (No matter how well the Saints do.) The French Quarter is sinister, like a French Quarter oughta be. I went for a run through there at 9 a.m. This girl in a black wife beater covered in tattoos stepped out of bar and asked me for a cigarette. I shook my head and she scoffed at me like I was an optimistic little asshole. On the levees by the Mississippi, a 12-year-old asked me if I wanted to buy some rock. When I said no, he asked if I had any shoes.

I spent my last night there in a hotel room, staring at the ceiling, wondering if I could handle the move. People are leaving the city, not relocating there. There has been no organized rebuilding effort. There are murders and carjackings every week. I’d have to get a gun for home protection. And it’s not like I’d be moving there to laissez les bon temps rouler. I’d be going to take on the killing apparatus of the state–work that breaks people much stronger than me in easier situations.

And I have a good life in New York. My friends are here. I’m 37 and have covered these streets for almost two decades. I got chased by the cops in the Tompkins Square Riots, screwed in the bathrooms at Downtown Beirut, shut down 5th Avenue in front of Rockefeller Center, and read my work at Carnegie Hall last fall. (If you don’t take time to read my emails…) I’ve raised quality hell in this town because I love it so much. But it has changed. The working-class artists who once made this place so wild can no longer afford the rent. There are warriors trying to hang on, but the NYC subculture is fading. Still, it’s the center of the universe. There is no vibe on earth like New York City.

A black lady cab driver from the 9th Ward picked me up at the hotel the next morning. I told her that I was a social justice lawyer thinking about moving down to New Orleans. She talked about how America has abandoned and betrayed her city. “There is a special place in hell for Bush and all his friends at the insurance companies. And I’m a Christian woman!” I gave her a five-dollar tip when we got to the airport. She turned around, gave the money back to me, and said: “The only tip I want from you, boy, is that you come back down here and help these people.”

So like they say in suicide letters: by the time you read this, I’ll be gone. It would be so much easier to stay. I’ve carved out a life here in NYC. But some of us would rather be called a “Fuckin’ bitch” by a 19-year old than be complicit in the glittering death machine. Or maybe in some weird way I need Executions, Injustice, Incarceration, Poverty and Hurricanes to feel alive. Truth is, I don’t know what demons or angels motivate me. All I know is that there’s a fight to be had in New Orleans and I’m going to do what I can to help.