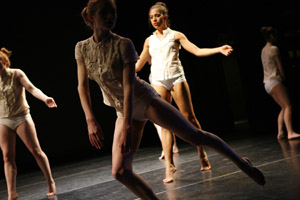 Undergraduate performances are not always appropriate for the critical eye, but a performance of dance works set on undergrads by well-known choreographers certainly is. With sophisticated and pleasing results, Yanira Castro, Ivy Baldwin and Daniel Gwirtzman created new pieces for Barnard University students this April for a concert dubbed Tharp/Sugar Salon/Gwirtzman. An added bonus was a Twyla Tharp classic, Eight Jelly Rolls, taught by former Tharp dancer Katie Glasner.

The ordering of pieces proved of utmost importance. The evening moved from Castro’s experimental PAMELA, to Baldwin’s grounded Smoke, on to Gwirtman’s celebratory Field, and finally to the classic and jazzy Eight Jelly Rolls. As though the evening experienced a self-contained momentum, the level of comfort on stage increased with each piece even though different dancers performed in each work.

Castro’s more subtle approach to movement initially proved a bit tense on the dancers in PAMELA. The young women stood fidgeting and shaking their hair. Normally, Castro’s use of awkward gestures and raw emotional content works, but the dramatic approach at the beginning felt uncomfortable on less-seasoned dancers.

After a mildly disconcerting session of fake laughter, the beauty of Castro’s piece emerged. The dancers stripped the bright American Apparel-like shorts and track jackets off their bodies, revealing white briefs and ruffled tops. As they shed their technicolor teen garb and swept their hair into messy buns, the young women took on a more ubiquitous ghost-like appearance. The mood intensified as they held their legs in coupe while bobbing about the stage, performed vigorous bird-like arm gestures and stared into the distance. The women became true performers; the composition of their bodies onstage in staggered stances was captivating. Their execution of the intricate choreography was spot-on, proving that Castro had truly taken these young dancers on a remarkable journey in movement and in mind.

Ivy Baldwin’s Smoke mixed the serious with humor in just the right way. Groups of women in green, flowered dresses were circled by two comic characters dressed in white shirts, suspenders and black pants. They mumbled, bumped into each other and scurried in and out of the seeming forest of women. The piece had a sense of laissez-faire, and dancers singing and chanting “Je ne veux pas travailler…” with stoic faces, drooping bodies and kicking legs added to the mood. The result was hypnotizing.

Gwirtzman’s Field heightened the evening’s energy. Bright yellow, blue and red costumes were just as basic, and equally strong, as the choreography. This work showed off the dancers’ technique by sticking with straightforward modern movements with a slight twist of ballet. The fast-paced first half of stag leaps and turns transformed into an adagio partner section. At times, however, the sheer number of people on stage inspired a confused dizziness.

Eight Jelly Rolls should have been the highlight of the evening, but unfortunately disappointed. The dance was performed well but lacked the subtle attitude and pizzazz that each of the multiple sections needed to fulfill the sophistication of the work.

Generally, the artists brought out the best in their dancers and vice versa in their process together. I am excited to have been introduced not only to a great set of new work, but I can contend that there is an impressive group of dancers coming out of Barnard University.

Jammie Holmes: Pieces of a Man

Pieces of a Man, Jammie Holmes’s latest project with Library Street Collective in Detroit, is a compact and powerful exhibition confronting Black trauma and healing. Consisting of seven large-scale acrylic and oil pastel paintings, all from 2021, it confirms Holmes’s promise as a compelling and lyrical new voice in contemporary painting.

This takes the idea of an artwork that has gone from creation, to destruction, to reanimation as the premise for a book that offers a much-needed glimpse into the ecology of the Bay Area art scene. It presents a template for how documentation and analysis can be used to honor the region’s idiosyncratic art making practices.