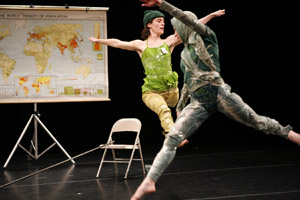 The Nothing Festival at Dance Theater Workshop this April was intended to be an “artistic oasis stripped from…marketing, fundraising, and production challenges,” where choreographers presented works created from nothing. The result of the first of the two-week festival, however, was reminiscent of a student choreographic workshop.

The evening commenced with Douglas Dunn & Dancers’ Zorn’s Lemma, performed by Dunn, Liz Filbrun, Alexis Maxwell, Gisela Quinteros, Paul Singh and Christopher Williams donning Rainbow Bright-inspired costumes—multi-colored unitards with plastic skirts. Much of the women’s movement varied little from floor-crossing exercises practiced during ballet class and was executed with about the same emotional commitment. Movement phrases were interrupted by bouts of sexy posing, spastic flailing, and partner phrases that verged on amusing. Ultimately, the dancers—most who seemed unsure either of themselves, the movement, or its intension—were upstaged by their costumes.

Colin Rusch and Angelina Jolie was the night’s only successful work because it was precise, detailed, and executed by two seriously compelling choreographers and performers: HIJACK’s Kristin Van Loon and Arwen Wilder. Although the women, clad in pedestrian clothing wrapped in clear packing tape, spent much of the piece simply shuffling around or briskly walking in circles, I was mesmerized, for, although there did not seem to be any inherent meaning in the actions themselves, their commitment to such deliberate execution brought meaning to choices that would have otherwise been read as arbitrary. Their props included a giant world map of the Density of Population, a metal folding chair, and a long pole. Van Loon and Wilder carried these onstage as the former asked, “How do I make my penis one foot long?...by folding it in half.” After a series of simple movements and a few rounds of counting aloud by thousands while Van Loon gesticulated her way downstage and Wilder hovered above the chair as if hesitant to sit on a public toilet, the piece began again. This time around, the penis joke was grunted inarticulately, pointing out the randomness of the piece’s earlier choices. The work abruptly ended with the thud of the pole falling from Van Loon’s hand.

Sam Kim’s gruesome work, Cult, would have been better served as a short horror film than a dance piece. While Cult created a sinister mood through its costumes—white dresses and long, hair-clawing fingernails—agonizing facial expressions, and slow, aching movements, suggesting pain, or even possession, it did little else. Watching Cult was like reading a screenplay with 95 percent of the words blacked out. We had a noun here and there, a few verbs, and a couple of adjectives, but were otherwise left in the dark about a narrative that existed in the dancers’ minds.

The last piece, Dean Moss & Ryutaro Mishima’s States and Resemblance (in-progress), began strongly—the men running around the stage bent-legged, floppy handed, slack-jawed and naked— the rest of the piece lacked direction. The illumination of fluorescent lights then jarred the men out of their confused reverie, transforming them from “performers” to “people”. Stagehands set a black folded divider onstage along with a white tarp, while Moss added a boombox, which provided the background music, and the dancers’ pedestrian clothes. Once dressed, the men seemed to choreograph the piece from scratch, looking at each other, stepping forward, staring at the audience, then repeating the approach in varied qualities and length. While I admired the performers’ presence, I was more interested in the piece that was abandoned when the clothes came on.

The festival’s curator Tere O’Connor explained that the “only rule…[was] to start from no idea.” Perhaps I’m oversimplifying, but isn’t there always “nothing” before there’s “something”? Granted, each choreographer has his or her own process—some feel the need to begin with a theme or task before stepping into a studio; in which case O’Connor’s directive might seem daunting. Even if a work is not about anything specific, like those performed at The Nothing Festival, I believe it must either involve a fascinating movement vocabulary—none of them did—or stellar wit and commitment in the execution of such nothingness as seen from HIJACK.

Process aside, just because you start with nothing it doesn’t mean you should end with it.

Dewey Crumpler is a painter living in the Bay Area. His solo exhibition The Complete Hoodie Works, 1993–Present at Cushion Works in San Francisco’s Mission District features over 100 small paintings on canvas made over the past 28 years.