Words Without Borders: The World Through the Eyes of Writers: An Anthology (Anchor, 2007) 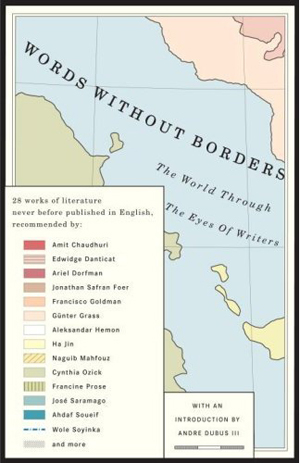 The question of whether the world shrinks at the cost of tradition, distinct culture or individuality is oft-discussed, but one product of globalization is rarely considered: the World Literature Anthology. Last month, Words Without Borders, an internet-based journal of literature in translation, as well as an advocacy group for translation into English, generally, published The World Through the Eyes of Writers (Anchor), an anthology of short stories, novel excerpts, essays and poetry from writers translated into English. WWB, in its concern with the paucity of writers that make it into translation and what the resulting translation means in a globalized social context, takes on the subject of globalization and expands, complicates, and finally, contributes to it, in its words and with its existence.

Words Without Borders is based in America (a partner of the PEN American Center and hosted by Bard College) and it is an English translation advocacy group. In his introduction, Andre Dubus III brings up WWB’s rallying statistic: 50% of the literature published in translation is translated out of English, while only 6% is translated into it. Of course, the solution—to increase translation into English, thereby making the whole thing an English/Other dichotomy—seems a little flawed, and it is a shame that WWB is an English-only organization. But increasing the amount of literature translated out of any other language, even if it is only into English, is a start. In any case, the statistic also reveals the lack of imagination of major English-language publishing companies. When it comes to finding works in other languages, they place almost all works in translation into their own special-interest market, their marketing niche. The rest of the world is a niche market.

In his affecting introduction, Mr. Dubus highlights the positive nature of translated works: their import as we clash with, benefit from and view—through the filter of the media—cultures and people whose reality is different from our own. “This collection of stories…expands [our vision]; instead of propping up insidious ethnic stereotypes, it shatters them.” And in conclusion: “It is up to us now to listen to the expression of our fellow human beings with whom we share this planet. This is our duty, yes, but it is also a deeply moving pleasure…” His effort to bring the World Lit Anthology out of a state of some multicultural pill to be swallowed is admirable, as is the acknowledgment of the political nature of such a volume, especially in our time—but, as a reader, the anthology left me all too convinced that these efforts were only a start.

A great many of the works included in The World Through the Eyes of Writers are excerpts from novels. And if you are someone who has ever read the first few pages of a novel with relish and promptly left it on the subway, you will understand how I felt about many of these. An excerpt from a novel called Provisional by Gabriela Adamesteanu struck me as I have not been struck by a work of contemporary fiction in a long time, and from the few pages in the anthology, I was extremely excited to read more. I learned, however, that Ms. Adamesteanu, a woman of significant political stature in her native Romania, president of the country’s PEN chapter and recipient of several national and international awards, has nothing translated into English save WWB’s two translations, and inclusion in a couple of anthologies of Romanian short stories. Not a word. Granted, Adamesteanu is herself a translator of French, so her books are in French translation, but not a single English translation. I found myself devastated by this fact, resolving to learn Romanian or French, to contact one of the very small translation publishing houses (Archipelago, for one, a really admirable house) and to beg them to find a translator for her. When I calmed down, the weight of those statistics that WWB decries hit me: how very many books, poems, essays are out there that I will never be able to read. On an utterly selfish level, I was overcome with a sense of confinement. I was trapped in a miniscule niche market.

This is, obviously, a symptom of the infamous coup American culture has staged on Other culture. American writers who already hold some kind of notoriety before their book is published are quickly snapped up. Adamesteanu would be published instantly if only her politics were concerned with America or she lived here. Instead, as she directs her attention to the politics of her own and neighboring countries, the only Americans that pay attention are those from Human Rights Watch (from whom she received an award given to artists who confront political persecution). This apparent lack of interest in anything but ourselves, our unquenchable fascination, has made the coup uncomfortably narrow. For within the reigning culture there is no room for anything but mirror-gazing; authors must either be American or reflect America back to itself. Anything too “ethnic,” too “traditional,” too centered on the culture from which it came is met with a deaf ear.

The transformative power of literature, is, perhaps, not the most fashionable or even believed concept anymore. Nevertheless, the works in The World Through the Eyes of Writers, while dealing with the same painful things that are covered in the news all the time, take the same hashed-out facts and gave them sense, potency, life. Reading stories that do this lifts a curtain: not on some generalized world or broad state of a country, but on specific realities about the ways people live. There is a vast difference between reading about a killing in the news and listening to, getting inside the head of the mother of that victim. Not only getting inside her head, but picking through the rubble guided by a skilled author drawing out colors, textures, whispering names and prayers. It’s obvious, of course, but here is the other half of wanting to read all this inaccessible literature for its beauty: to read it and to see into that which I have mostly only been able to look on. Which, as Mr. Dubus says, is “our duty, yes, but it is also a deeply moving pleasure…”

The works speak for themselves: Senadin Musabegovic writes, in the poems included in the anthology, of his youth during the siege of Sarajevo:

With clean feet we worm into our sheets We dream of dragging razors across our veins
They let us
Slowly drip blood on freshly tautened linen,
Stain the polished floors,
Letting the dust become red in the crevices
Of the floorboards
As we soak the dried out bosom of our once-fertile country with our fruit.

Or Hassan Kader, a Palestinian:

Turning on the car lights was a risk. Walking—however carefully—in dark streets was a luxury, and the sound of explosions was coming closer again. And so the car took off for Hamra at high speed and it was no surprise that it crashed into another car abandoned in the middle of the road.

It may not spark the revolution tomorrow, but it opens an aperture; it is a different kind of reading, not to skim a news rag, but to live for a while in a book. This space, for all the vastness of our dominant culture, is an enormous deliverance, for—in the wall raised at our border—it cuts a window to the world. If we are denied this perspective, we are denied hugely.

We’re All Going to the World’s Fair is a journey down an internet rabbit hole. Its teenage protagonist, “Casey,” takes the challenge and allows its lore to consume her life. Beyond her relationship to her computer, we learn virtually nothing about her.

The exhibition centers on motion above all else—stemming from an open-ended question on the apparatus of words, and how communication guides, or perhaps structures, the way human beings exist in the world.