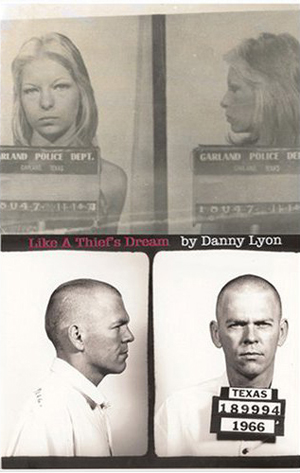 Danny Lyon calls Like a Thief’s Dream “the story of a journalist and a thief,” but that’s not a precise description. Lyon, a photographer and filmmaker, says he did not study journalism and uses apologetic quotation marks when he calls himself a reporter. Similarly, James Renton was not just a thief. The FBI attributed three murders to Renton, though he was only charged with one—the 1975 murder of an Arkansas police officer—for which he was found guilty.

For Lyon, Jimmy Renton was a friend above all else. Incorporating information from police and FBI records as well as from interviews with officers, agents, inmates and others who knew Renton, the book tells the story of their relationship. They met in 1967 when Lyon was starting a prison-related project and Renton was serving time for burglary in Texas. The two shared an interest in photography and marijuana. Renton worked in the prison darkroom and helped prepare a portfolio of Lyon’s photos. (The book includes photographs taken by Lyon and by others.) Lyon periodically smuggled in marijuana for his fellow “pothead,” once concealing it in the diaper of his one-year-old son who was with him on a prison visit.

The pair also regarded friendship as involving mutual self-interest: each sought to get something from the other. When Lyon testified as a character witness for Renton at the 1979 trial for the murder of Officer John Hussey, he told the jury: “If he lives, I am sure that I would have an involvement with him, and it will probably produce a film or book or something….” In addition to ego-boosting attention, Renton received cash and care packages from Lyon.

The men started corresponding soon after Renton’s murder conviction, and they continued to write to each other (except for a five-year break in communication during the 1980s) until Renton’s death in 1996. Although Lyon only once saw Renton “in the free world,” between prison stints in the 1970s, the convict spent time outside prison in the decade following his escape. A substantial portion of Like a Thief’s Dream relies on letters Renton wrote about his 57 days on the run.

While in the courtroom during a recess in the capital murder trial, Lyon offered Renton marijuana, which Renton declined. “At least one of us was in touch with reality,” Lyon reflects. Yet questions about Lyon’s judgment repeatedly arise. He insists on Renton’s intelligence but provides little to support this claim and plenty to undermine it. Intelligence usually doesn’t show itself in poor choices like Renton’s. Boasting of crimes to potential witnesses and informants was not very smart. When Renton escaped from prison, law enforcement officials accurately predicted where he would go and be recaptured. Further, Renton and one of the others who fled the Tucker Facility of the Arkansas State Prison “were doing life sentences for murders, murders that were theoretically committed to cover up much less serious crimes. Had they not committed them at the time, and instead faced the consequences of the crimes they were doing…, they would have received sentences that they might have discharged many years earlier [than their escape].” As one of Renton’s fellow prisoners put it, “The murder was just a real dumb mistake.”

Renton used dozens of different names. He counterfeited currency. He sometimes admitted and other times denied killing a partner who was wounded in a shootout with a bank guard. Despite this, Lyon eagerly takes his friend at his word. He uncritically accepts his friend’s account of the prison break, including the fantastic interlude with an “angel” Renton claims to have met in a laundromat. They shared not only soap but also “the comfort of lovers” (after the “flawless” redhead prepared “a grand home cooked meal”), Renton tells Lyon. “Who would have thought I would find such a paradise…?”

Lyon also believes the claims of innocence made by Renton’s convicted accomplice in the killing. Lyon ascribes Harold Davey (“Dinker”) Cassell’s continued incarceration to that prisoner’s refusal to incriminate others in order to clear himself, which Lyon takes as evidence of “honor among thieves.” (Reliance on platitudes such as that one, and others like “a hooker with a heart of gold,” is recurrent in Like a Thief’s Dream).

Ultimately, disguises rather than what they hide attracted the photographer to the prisoner. “Jimmy was full of secrets,” Lyon says, “and although the friendship always had the potential to reveal some of them, his aura of mystery was part of his appeal.” He never asked Renton what happened the night Hussey died. Though he claims to have gone on “a search for the truth” after Renton’s death (from hepatitis C), Lyon also wants to hold on to his romantic image of a smart and charming outlaw. “Maybe,” he writes, “I was trying to make him something he was not.”