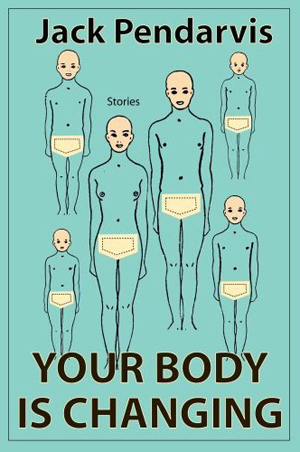 Jack Pendarvis has a talent for titles. On the two separate occasions of coming across The Mysterious Secret of the Valuable Treasure (Macadam/Cage 2005) and now Your Body Is Changing (Macadam/Cage 2007), an insatiable urge to purchase and possess his books filled me, an unalloyed consumerist desire I haven’t felt since watching GI Joe cartoons in the mid 1980s.

Pendarvis hails from Alabama, and now lives in Atlanta, writing fairly regularly for Oxford American and McSweeney’s Online (his style is the average of the two magazines). His two collections, published two years apart, are pieced together from recognizable variants of the short story genre. They’re funny, to different degrees: there are sort-of-funny one-note gags (“Courageous Blast,” on the marketing of a chewing gum that gives you diarrhea), conventionally funnier scenarios (“Tollbooth Confidential” where a 30-year old naïf is paid to smuggle a $15,000 brick of hash through a tollbooth), and a few gags that are not only hysterical, but deadly serious. This includes the novella “Your Body Is Changing,” which gives the collection its title, and has been screwing up my dreams.

But I should scarcely dare to assess a novella about a fundamentalist Alabaman adolescent with a forked tongue and an estrogen build-up in his left breast, on a quest from God to awaken and marry a brain-dead Terry Schiavo figure. Such a novella eschews analysis. In an interview Pendarvis described it as the story of a boy who goes on crazy adventures. Let it be crazy adventures for now, though I suspect after the fact we’ll realize that “Your Body Is Changing” hit the nail on the head for what America ends up having been all about from 2000 through 2008.

Pendarvis has cited George Saunders’s use of the “Inarticulate Narrator” as an inspiration for his technique. This notion goes a long way to explain Pendarvis’s talent for using bad writing against itself. It’s a commonplace for creative writing teachers to tell their students that “You have to know the rules before you can break them.” My teachers always gave Picasso as their example. Pendarvis, who dabbled in creative writing instruction earlier in his career, turns the old saw on its head in many of his pieces, following the polar opposite of a key creative writing rule for the duration of a story. Use adverbs promiscuously, tell don’t show, lay on the exclamation points! In the old collection, this was a technique for generating distinct voices. The novella “The Mysterious Secret of the Valuable Treasure” crammed an adverb into just about every sentence, and used just about every ham-fisted synonym for “said” in the thesaurus (as in: he wailed, she mentioned, he replied, she yammered, etc).

Pretend that it’s Bob Dole’s convention speech in 1996, plodding to the end, greeted by the sound of crickets. It all starts making sense.

To write like this is like writing from inside an Oulipian formal constraint—Georges Perec left out a vowel and ended up with a novel; Pendarvis writes this piece so that the constraint becomes the sole element. What is left out is normal writing and the ordinary world, what remains is the claustrophobic voice of the speaker, laid bare.

In a piece about Tennessee Williams’s Baby Doll in this month’s Oxford American, Pendarvis drops a line that is too neat to omit: “All Southern writers have to figure out a way to thrive in the titanic shadows of their forebears.” Whether it’s George Saunders, or the McSweeney’s crew, or even all those Southern ghosts, Pendarvis does well for a haunted man.