Florence Falk, On My Own: The Art of Being a Woman Alone (Random House, 2007) 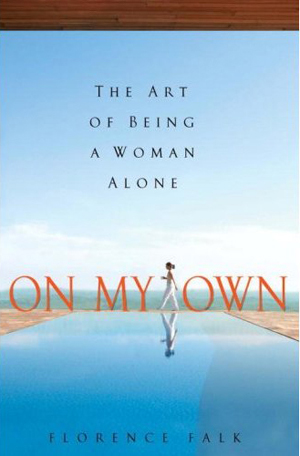 In her last address to Congress in 1892, “The Solitude of the Self,” women’s rights suffragist Elizabeth Cady Stanton famously urged, “No matter how much women prefer to lean, to be protected and supported, nor how much men desire to have them do so, they must make the voyage of life alone.” Although more than a century has passed, as psychotherapist Florence Falk has discovered, aloneness continues to feel like a burden to most women. In her new book, On My Own: The Art of Being a Woman Alone, Falk makes the case that it’s time for women to come to terms with the fear of being alone and learn to embrace solitude so they may stand on their own. The Rail sat down with Falk at her home on the Upper West Side to discuss On My Own.

Erica Wetter (Rail): “The subject matter of women [living] alone is hardly new,” you write, but “‘woman alone’ as a subject is absolutely new.” I wonder if you can clarify that distinction and tell me what you’re trying to do with this phrase “woman alone.”

Florence Falk: I’m really trying to talk about a woman seeing herself not as an object, but as subject, as the central narrator of her own experience. If I’m here and I’m reflecting and I’m in a state of connection with myself, what is it that I’m experiencing? How am I experiencing myself? What am I allowing myself to know? And what am I preventing myself from learning? What am I keeping at a distance? So it’s very much about how I’m receiving myself, and what am I doing with that information.

We are so used to being observed and being profoundly self-conscious about how others perceive us. I notice it with the people I work with very often, and I will say “Suppose instead of wondering what the other person thinks about you, why don’t you turn it around and look out at the other and see what you’re responding to and how you feel? What do you think about that person?” I’m talking about a way of observing and being here, feeling comfortable in myself.

Rail: It’s interesting you should describe this as “being here.” I noticed Buddhist undercurrents in the book, and I’m wondering what role Buddhist thought and spirituality played in shaping your ideas.

Falk: I think the psychology of Buddhism is vastly important because of the whole notion of letting what comes up come up (i.e. not judging). Not pushing away, but allowing these thoughts and feelings to emerge, and as we do that being able to say, “Okay, that is my thought and that is my feeling, but I am not these thoughts.” Theoretically this is not in any way a complicated thing to say, but in terms of an inner awareness, I think it’s profoundly difficult. I’m not a practicing Buddhist, but I’m deeply influenced by this approach. When I’m working with people, I am trying to help them to see how they enter into a particular state, so they don’t identify with it and therefore fall into a kind of bottomless pit. Also, and this is very personal to me, and it’s not something I would say is necessary for any other person, because everybody follows their own path, but from a very young age I’ve had some intimation of something that was larger than myself—that in some ways used to frighten me and over time became a comfort. The idea of not knowing, which once terrified me, or the Buddhist sense of emptiness and groundlessness, all of this was once profoundly alarming to me, and now it isn’t.

Rail: How did that shift happen? Have you seen this happen in any of your patients?

Falk: I definitely see shifts taking place, though I don’t know they’d ever express it in this way. [The shift involves] more and more tolerance for what you don’t know, for all that is unknown, and for not being able to predict, and certainly not trying to control everything. It’s always about control. I think this has been an evolving experience in my life, and it’s not something that I’ve thought about in the way I’m describing right now, because it has been an evolving, learning process, and it feels to me that the more I can live that, the more satisfying my life is.

Rail: Would you say that solitude has helped you in this?

Falk: Solitude is essential. Some measure of it is important for everybody, as different as we are. I’m not sure that too many people know what to do with it, because it’s inimical to the tensions that I think this culture is fueling—the lust for consumption that keeps us always off balance, un-centered, and away from ourselves—not in connection.

Rail: Could you talk a little about the cultural forces that have converged to make women feel ashamed of being alone?

Falk: I say in the book that the “spinster” has morphed into “being a woman alone,” which is a short hand way of saying it’s not that women don’t find over time that they can grow comfortable [with being alone], but that there is an internal struggle—even for pretty secure women. It’s not that long ago that the spinster was real—we joke about it, but we all know what it means because we all carry the archetype in our unconscious. I think it’s also that we’ve been reared to be dependent and to be nurturers. I mean of others, not ourselves. I’m not talking about getting your nails done or bubble baths, although they feel good and may make us think we’re taking good care of ourselves—I’m talking about the state of our being really, nothing more or less than that. Nurturing is always an outer-directed, family or relationship-oriented nurturing. We’re always last on the list. How do you hear yourself in this culture, especially if your partner has just left you and you’ve also been taught to think: “What did I do wrong?” Women really take on huge amounts of guilt. I’m not suggesting men don’t have their own version, but that’s not my subject here. My subject is really the power of the feeling of shame in women’s lives, because I see it first hand. Over and over again, whenever something goes wrong, a woman will ask, “What did I do wrong?” and feel a sense of guilt if she’s not being all things to the other.

Rail: There seems to be a real tension between finding a community, but also finding time for solitude, and yet the two are so entwined.

Falk: They are so entwined. I think they complement each other. We are living in such a frenzied culture, we mostly can’t hear ourselves. We’re out of touch with ourselves without even knowing it. We need to have some way of quieting ourselves, resting in stillness as a way to restore ourselves, to sort and tackle problems, and finally to begin to sort out whatever we call our voice from this profoundly conditioned set of expectations telling us what we ought to be and how we ought to behave. Listening to the personal self, for some of us maybe for the first time in our lives, is what I mean by creative solitude. We can’t get in touch with ourselves any other way.

Rail: Can you talk a little about the role solitude plays in creativity?

Falk: I absolutely believe that people who are creative and doing things creatively must know about solitude. It becomes a practice for them. You can’t write a book or a poem or paint a painting unless you are able to return to that place. It’s like catching your breath. I think that’s a kind of natural commitment. Whether they use that solitude to hear themselves is another question.

Rail: At one point in the book you comment that despite the opportunities we have because of the women’s movement, we’re still afraid to stand on our own. And I’m wondering if you think of the book as a self-help or feminist tract, or some combination of both.

Falk: There is no question in my mind that I’m a feminist, although I don’t know quite what that means in terms of the history of feminism. I feel very strongly—it’s in my little manifesto at the beginning of the book—that statement about what women want (“complete sovereignty over her body, mind, spirit, and soul, as well as the sanction and protection by the body politic…to pursue her life as she sees fit”). So that’s what I think feminism is, and yes, I’m a feminist. In our culture, women breathe in shame like oxygen. I think the media has helped create such angst inside us, such a sense of self-consciousness and inadequacy that it takes next to nothing to pull us off center. We’re being trained to buy, discard, and buy some more, but also to see ourselves in a very particular way, meaning that we’re always being undermined. We are taught to need the next thing, and all this fuels envy and desire, so we’re never satisfied and have this sense of lack—a sense of unworthiness. But it’s more than unworthiness, it’s the feeling that “I lack something,” and it could be something like “I’m not as tall or beautiful or creative or whatever we think we’re missing.” But I think on the very deepest level, there is a sense that there is something wrong with me as I am. If we have to be a Victoria’s Secret kind of woman and the nurturer, how do we put those together? It’s another manifestation or incarnation of the virgin/whore dichotomy. I think it’s huge in this country.

Iranians of 2022 have now resorted to waging a revolution to bring down their previously revolutionary regime. But the 1979 and 2022 revolutions could hardly be more different.