Works by Rick Klauber at the Amelie A. Wallace Gallery of SUNY, Old Westbury, are assembled from wooden shims that are each painted a single, intense color and hung up, mostly in rows that form a roughly rectangular pattern. The shims are wedge-shaped, about 16 inches long and anywhere from two to ten inches in width. Essentially scraps, they are chipped and uneven, and the unsanded white cedar sucks up the paint, giving the colors a sunken matte finish. The colors of “Modern World” move from midnight blue, in the upper left corner, to paler blues, then the primary colors of full sunshine, followed by dusk-grays and one red piece that made me think of the horizon line at sunset. It returns to dark blue and finally to some pinks in the lower right-hand corner, like a day passing from morning to night and back to dawn again. In this sense the work reads down and across like a book. Another piece, “India,” is composed entirely of white-painted shims but for one fuchsia and one fluorescent yellow in the center, like a flag. 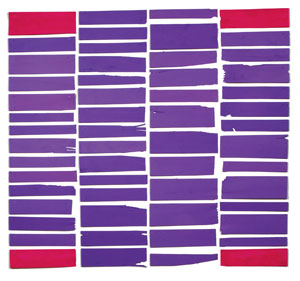 Klauber’s recent works on paper are black lines “interrupted” by colored bars. The impulse to use the shims came out of this idea, which he pursued until the work became all interruption, no lines. There is an impenetrability to the shim paintings, a place where sculpture and painting hover, neither giving way. They are made of three-dimensional wooden elements that are not attached to each other, only to the wall. Their surface does not quite “read” the way a painting’s does, but after looking at them for a minute, they begin to coalesce as painted compositions, due to their rectangular format or to their patterns of color. This is in itself an intriguing aspect of the work—the act of engaging with Klauber’s proposition that these are indeed paintings. Making this leap is something like a game, in the sense of Walter Benjamin’s definition of “play” as the unification of perception and creation. We visually receive these works and at the same time rise to meet them halfway. This is always true to some degree with art, but the shim paintings draw this element out by being not only abstract but, essentially, mosaics. In the same way people have learned to “see” non-representational art, one has to adjust to “see” non-representational painting in the shim compositions.

It is as though, by playing with colors and arrangements, these works are able to encompass various grammatical elements of abstraction: the original plan of the artist, the interaction of formal elements, the rendering of the surface, and then the accidents of paint—drips and ragged edges and expressionistic strokes—translated into knot holes and ragged edges and wood grain. The works are both a maneuver out of a cul de sac and a synthesis of several strands of latter-twentieth-century art—minimalism and abstraction, the conflation of sculpture and painting, and a collaging impulse inherited from artists who came out of the sixties like Rauschenberg, Stella and Motherwell. (Klauber worked for Motherwell as a young man.) Yet if these works are a kind of summation, it is with a particular sense of reduction and elegance. The way one color leads to or interacts with another, the beautiful way the outlines of the shims themselves are pieced together like a compositional puzzle, the shadowy milk-whites, all have to do with a long dialogue with abstraction and a familiarity with its idiom that plays as ease, even casualness, and is anything but.