In Olga Chernysheva’s photograph The Anabiosis (2000), a bloated plastic bag sits frozen on a field of snow. Icy footprints surround the specimen, its dark contents obscured by a fog of precipitation. What could be any amorphous object dropped or discarded is in fact a Russian fisherman, who has sealed himself inside a body-sized bag to withstand the brutal cold. The title refers to the near-death state of suspended animation into which some animals succumb for long periods—and then revive. This potential to recover, from a dismal state, permeates Chernysheva’s excellent exhibition—picturing contemporary Russian life in a tender thaw. 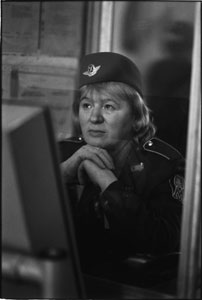 Olga Chernysheva was born in Moscow in the early 1960s. While she exhibits widely in Russia and in Europe, Isle of Sparks is her first solo exhibition in the States. The show features a selection of photographs and videos made over the past seven years, during a precarious period of economic and social transformation in her country, from the communal to the privatized. Chernysheva invites a sober look at a society, its future indeterminate, drifting between depression, indifference, and sparks of hope.

Like the ice fisherman, the workers in the series, On Duty (2007), are devoid of color or life, numbed in the grip of stasis. In the first of two black-and-white photographs from the series, a middle-aged woman in a crested uniform sits inside the glass box of her workstation, gazing off past the frame. In the second, a young man stares blankly at a monitor, enclosed in a similar terminal, yet casually dressed in street clothes. The difference in uniform is a small representation of their epochal divide, notably a younger generation’s appreciable gain in freedom of expression. But the greater barrier, to personal fulfillment, is insurmountable, and the boredom and futility indiscriminant.

The potential to move forward is introduced in The Train, a single-channel video from 2003. Projected on the gallery’s back wall in black-and-white, the handheld camera moves, car-by-car, from the front of the train to the back. Each door opens to a different scene, some cars bustling and full, others almost empty. As it would on any commuter rail, the camera is met with disinterested, detached stares from passengers of all ages, sparked with moments—an accordion player, a beggar—of connection. As the journey unfolds, a text scrolls onto the screen, an ode beseeching landscape, natural simplicity and philosophy. These modern desires seem tied to an unfamiliar world, a machine age long past, a romantic quest of seeking but not finding. Yet even within this illusory, black-and-white trance, there is a sense of promise made visible simply by closing one door, and opening another.

And then, finally, color. Space to breathe. A small monitor glows with Anonymous (2004), a video of a summer day in the park. An older woman, standing amid a group of men and women of similar age, begins removing her clothing. Every part of her robust, naked body is exposed as she changes into a bathing suit and then stretches out on a blanket. A voiceover and text, in Russian and English, by a popular women’s self-help sex guru, slowly encourages the exercising of the vaginal muscles to achieve a greater “femininity.” He soothes, “liberate yourself… improoove yourself…” The playful contrast between the woman’s lack of body-consciousness, and the instructor’s erotic suggestions, adds welcome humor and relief from the show’s stark austerity. Yet this play on the pursuit of pleasure, improvement, and freedom is a potent realization—one not entirely comfortable with the notion of desire.

Hidden behind the main gallery wall, a cluster of small, individual video screens emits an incandescent glow, radiating singular moments of passion and impulse. Windows (2007) is a series of voyeuristic penetrations—dark, shaky and for the most part, banal—into apartment interiors, framing anonymous inhabitants as they go about their daily lives, ironing, or playing guitar. One view finds a group of four people, arms tightly around each other, swaying and dancing in a wave of intimate, consummate ecstasy. It is a familiar moment, one of many representations in art of joyous, arm-in-arm dancing. Somehow Chernysheva’s take seems the most exuberant of all, perhaps because it is so surely hard-won.