When Jens Hoffman was director of exhibitions at the Institute of Contemporary Arts, London, a distinctive trait of his shows was their immaculate presentation and highly creative approaches to presentation. From the painted walls to the little exhibition guides and atmospheric changes from room to room, each of Hoffman’s efforts raised the bar on exhibition design, perhaps a holdover from his non-art background of theatre direction. Whatever the case, during his tenure painting never figured much in his thinking. In July of last year he was appointed the director of the Wattis Institute in San Francisco, and his parting shot to London is a direct statement about painting as inspired by Marcel Broodthaers. 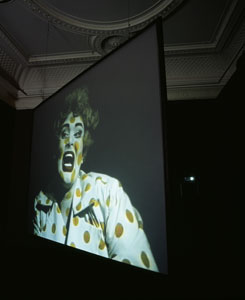 Titled Very Abstract and Hyper Figurative, Hoffman has turned this commercial gallery into a department of a fictional museum, “The Museum of Modern Art and Western Antiques, Department of Pigments on Surface.” A title taken from Broodthaers’ Museum of Modern Art Department of Eagles (1968-72). With the walls painted a deep institutional green, Hoffman presents two collections of paintings within floor-to-ceiling vitrines, divided into the figurative and abstract. Alienated behind glass and hung by wires in stacked columns, we confront these paintings as if they were ethnographic or cultural objects from a bygone era.

Consisting of mainly small-scale works by the well-known (John Currin, Martin Kippenberger, Tomma Abts), the highly regarded (Michael Raedecker, Wilhelm Sasnal, Dan Walsh) and a couple new kids on the block (Varda Caivano, Clare Rojas), the work collectively records what’s in vogue at this moment as well as what has recently passed through London. The advantage of displaying these works in large glass cabinets is that their backs are exposed as well, thus altering our perception of them as objects. Is this yet another statement about the death of painting? Or is the curator suggesting that, despite their selection into abstraction and figuration, they are essentially the same type of object? Hoffman’s gesture seems both retrospective and forward-looking. Retrospective in the sense that he is alluding to a Belgian conceptual artist of the ’70s (thus the nostalgic appearance of the show), but forward-looking in the way he has subverted the idea of painting. In the end does this offer anything to painting? As with many of his other efforts, there is a stronger presence of Hoffman the curator than of the artists. It is an engaging exercise in the recategorization of art that perhaps opens another view of painting for those who think of it only in terms of the picture plane. Hoffman is a distinct practitioner of curater as auteur; perhaps he should give up the curating and just come over to pure creation. 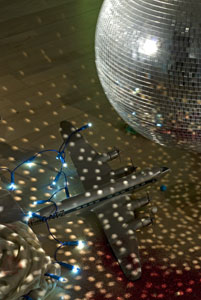 At the ICA, Mark Sladen’s first act as director of exhibitions has been to bring in Stefan Kalmar and Michael Bracewell’s The Secret Public from the Kunstverein München. Named for the Punk culture collage fanzine published by writer Jon Savage and artist Linder Sterling, and subtitled “The Last Days of the British Underground 1978-1988,” this historical show brings together the diverse strains of the ICA’s scope—art, intellectual culture, theatre and music.

Roughly defined at the end of punk and the beginning of New Wave, from the arrival of AIDs and Maggie Thatcher, it is a period that the curators describe as a “dark flowering of creativity.” In fact, Thatcher appears, like a haunting, early on in Richard Hamilton’s “very clinical” installation, Treatment Room (1983-4); a life-size recreation of an operating theatre with the former prime minister looking down from a television screen. Meant to recapture a difficult political moment in Britain, its videos, installations and ephemera speak for these times more than the big painting from the ’80s School of London (Hodgkins, Kossoff, Freud, Auerbach), or the “media-friendly” ’90s YBA objects that were to follow.

With lesser contributions from Peter Doig and Gilbert and George, and with Linder Sterling’s posters and Wolfgang Tillman’s club photos quietly adorning the café and lobby areas, it is the two banks of videos (with headphones) sitting at the end of this gallery that captures one’s attention. Among the video offerings are films and recordings of performances by Charles Atlas, Derek Jarman, John Maybury, Cerith Wyn Evans and Isaac Julien, with a standout contribution by Stuart Marshall and Neil Bartlett, whose documentary, “Pedagogue” (1988) presents satirical speech about Thatcher’s introduction of the anti-gay Clause 28 into the English school system. This is not to imply that it is a show of slight objects, rather it is the scatter and sprawl of Marc Camille Chimowicz’s “total environment” that steals the show. “Enough Tyranny Recalled” comes complete with strobes, disco ball and even a fountain, its sprawl perhaps says more of the difficult moments of this period than some of the agitprop videos. 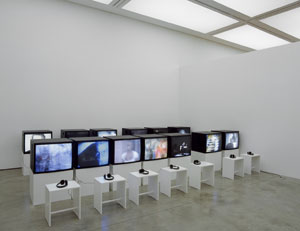 Quite unlike Hoffman’s efforts in these spaces, the installation does not excite the eyes, nor is it really for fans of the traditional visual arts. If anything it maybe replicates the rough, cut-and-paste aesthetic of the eponymous fanzine. In its attempt to define and record a subculture, The Secret Public has produced a distinct view of the British ’80s that is neither nostalgic nor ironic. This is not quite the definitive show for that post-Punk era, but it could provide inspiration for our current difficult political moment in Britain, and perhaps even a new dark flowering.

There is a rumour that Adam Gilliam takes more chances when he’s in his studio, that the work there just barely holds itself together and is about to fly into pieces. Over in this show it is quite the opposite; the sculptures are firmly rooted to the ground, although they perhaps want to come apart in spirit. Titled “Art is a cupboard,” the show at first glance feels like a bunch of cupboards disassembled and reassembled, all rather rapidly, with jig saw and glue gun.

Suggestive of anthropomorphic forms, the sculptures are strewn across the gallery floor, and recall the playful practice of Richard Tuttle, coupled with Phyllida Barlow’s more materialistic and sculptural inclinations, with the spatial inquiry of Vincent Fecteau. But where Tuttle’s peregrinations seem more formal and abstract, compressing the three-dimensional into two, Gilliams’ current groupings hint more at worldly objects and feel closer to Barlow’s humour. In fact, if anything he seems to be creating allusions to flatness (e.g. a floor plan drawn onto a sheet of wood) that turn into sculpture. In one a black-white Op Art pattern painted on part of the sculpture is echoed in a linear design drawn on another part of its body, while a mirror reflects an attached ball of wire. In other words, his work draws from the painterly to the sculptural—like Barlow and Jessica Stockholder. Since it is particularly difficult to articulate the qualities and effects of such intuitive, ramshackle creations, Adam Gilliam may well be one of London’s better-kept secrets.