Dana Schutz has a way of making every painting work, and work for her. In her latest, highly anticipated show at Zach Feuer Gallery in Chelsea, there are big and very big cartoon-figurative paintings, smaller ones that are more like studies, a couple of abstractions, and even a few paintings hidden near the back of the gallery with shaped voids cut into the canvas. Each of these works, even the most ghoulish and intentionally nauseating of the bunch, exhibits an astonishingly facile confidence. 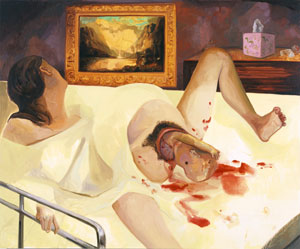 At 31 years old, this celebrated wunderkind from the Midwest is already a bona fide art star, and with that level of poise, come show-time, each work seems ready to walk out on stage and knock-em-dead, despite Schutz’s persistent attempts to convey a kind of false modesty or stage fright through self-undermining gestures. For example, several of her cut canvases reveal a cheesy under-layer of black velvet, while in the 2007 painting, “How we would dance,” brilliant white marks look like strands of masking tape left on the surface of a seemingly unfinished work. Throughout the show, one is confronted by a series of such in-your-face, faux-amateur stunts—from the half-assed features painted on question mark faces to the queer, birth-defected hand holding a cigarette, to the spastic palette that seems to feature every shade in the rainbow, as if the artist had simply indulged in a youthful compulsion to use all of her colors at once. The effect, of course, is just a setup for Schutz’s devastating bait-and-switch mastery over her medium and her persistent ability to create thought-provoking, arresting space in a painting.

And there is tremendous range to Schutz’s facility. There are nasty paintings, cutesy ones, hilarious ones, nostalgic ones, depressing ones, one-off-ones—they’re all part of a brilliant, self-deprecating offering.

Schutz’s Nick Jr. atrocities do make for intensely impressive glimpses into dressed-up disease. For example, in one painting, a woman births toxic defect baby while studying an ornately framed landscape painting over her shoulder. It’s as if she can’t take her mind off art. Sad. In another, an inbred teen rides shotgun in a car next to her trucker-capped father in a sky-blue, rust-spattered chassis, a la CeeBee in the brutal Dennis Hopper film, Out of the Blue. And in the showstopping, bloated “masterpiece,” “How we cured the plague,” a strange-as-hell zombie stands with its arms spread wide in a cavernous hospital, waiting for a blood transfusion from a flabby land shark.

It’s a jarring show. The subjects jerk from place to place, yet add up to a world of poetic richness. There are nuggets of dreamy potential, each refined into a glorious high-key soup of Looney-Lune realism, even if some works do feel immature, premature, or overly ambitious—like the large and impressive, previously mentioned, “How we cured the plague.”

What if we compare Schutz to Amy Sillman, whose paintings have, for years now, looked to me as if they’ve been fighting off the ropes to form an “original” language, even as they take a beating from the stingy gods of art history. Schutz, on the other hand, is more the Hollywood version of a boxer. In each painting, it’s as if she’s gone down for 9 counts, pathetic and weak, only to spring back up at 10 like Rocky Balboa against Apollo Creed. And this precise drama feels present in every painting.

So Schutz has a talent for oiling her own abs and staging a comeback. She wins each bout with her painterly fantasies, pulls every painting off, however improbably. And while thrilling, this finesse can sometimes feel a bit disingenuous if what you seek is more of a diamond in the rough. For no matter how lost she may get in her audacious, rovingly intuitive SpongeBob SquarePants madness, when it comes right down to it, Schutz always knows how to get herself back to safety before any real damage gets done, gently reeling herself in from the demonic weirdness she has conjured and sewing it all up into a resolved painting.

As much as I appreciate Schutz’s virtuosity, this show made me yearn for work by an artist like Albert Oehlen, whose paintings couldn’t give a damn whether I like them, or if they pass the test of “good painting”—probably because they’ve long since lost sight of whatever “good” paintings they might have been compared to in the first place.

Despite this, I’m won over by the piston-like force of Schutz’s art-making and the range of her creativity. It’s amazing how she wills her way through each painting’s Do Not Enter—kind of like the anonymous, disheveled aspiring singer in Robert Altman’s Nashville who is perpetually tagging along and overlooked, but who, in the end, has the goods and does deliver—the blonde straggler who, after the country music industry’s top star is shot dead on stage, grabs the mic off the floor and leads the audience in a cathartic chant of, “It Don’t Worry Me.”

The fact that all of Schutz’s paintings come through with flying colors, in a sense creating an unrealistic, though often fulfilled, expectation of virtuosity, can be credited to just one thing—talent. While the paintings do challenge themselves mightily, they can’t help but reveal how enamored they are with their own accomplishment. Cumulatively, the show comes across as excessively successful. Schutz’s gift is a technique that each time out exerts buoyancy and relevance over otherwise inchoate, dysfunctional concerns about the world: her depressed and dissonant visions get to swim upstream to the beat of a self-congratulatory paintbrush.

In past exhibitions, there’s always been that one painting that takes me somewhere and drops me off on my own, lets me contemplate something without being reminded of the artist and her talent. Take, for example, her truly inspired Red Grooms-like “Google” (2006), or the undeniable showstopper from her 2005 outing, “The Autopsy of Michael Jackson.”

Schutz’s present show leaves me thinking about the melancholy painting “Dad,” which is not, in fact, so impressive—and yet gratingly hard to dismiss. In it, the word is written in the sand on a beach, soon to be erased by the incoming waves. I find myself wondering what will erase Schutz’s painting. Maybe nothing. Like many of her most iconic early works—notably the pig-nosed blonde blowing snot like a cranked open fire hydrant, or the morbid albino in a black turtleneck—this painting seems here to stay. We’re stuck with these images, and no one is going to come along to erase them. Schutz, for better or worse, never seems to doubt this. It don’t worry her.