With New Paintings Andrea Belag makes it clear how much she grows with each new exhibition. Four years on from the last time I saw her work (at the Bill Maynes Gallery) she has reinvented her practice yet again, giving us some of the most accomplished, not to mention downright beautiful, painting to be seen anywhere. She’s filled her new exhibition at Mike Weiss Gallery with eleven lush canvases that smolder in your thoughts long after the time they spent in front of your face. 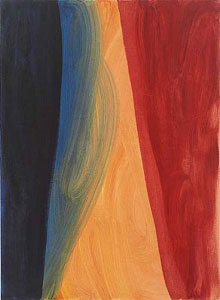 Belag has always been able to wield her spellbinding painterly chops with ease and confidence, creating loosely formal compositions that are so deft in terms of color and gesture that I almost feel guilty in the amount of pleasure I get from them. They also slide along that thread of abstraction that allows meaning and interpretation to unfold and shift. With a stroke of her brush Belag can conjure a myriad of associations and moods, from the coppery sheen of rolling auburn hair to moonlight on a lake, while all the time reminding us that it’s nothing more than pigment and medium on canvas. There is a unique beauty to this kind of experience, one that envelops us mentally and optically and doesn’t dictate its meaning.

Her past work often consisted of loose, grid-like compositions made from varying vertical and horizontal bands of luminous, translucent color. Some of the brushstrokes are full-bodied articulations of movement, while others lie quietly transparent, barely seen. These earlier compositions evoke architectonic structures and at times windows into a fulsome world of light and movement. The new paintings, however, are a departure. What once seemed to cater to a modernist mindset has given way to a new painterly space. It’s much more perplexing than her earlier work, and far riskier.

There’s a certain comfort in the grid. We can never really get lost in it; take a few turns here and there and you’re back where you started—at the holy structure of modernist thought. Belag’s paintings now resonate with an oddly lateral perspective that’s left the grid behind. The majority of their surfaces are sectioned vertically, in groups of two to four segments that often bleed and blend into one another. In their verticality they suggest a space that’s capable of harboring a human body, or ripe for physical interaction. Without the grounding of horizontal bands, we’re left to float, trying to fix a position from which to proceed. In “Awash” and “Shadow of Doubt” there are thin, branchlike brushstrokes running horizontally across part of the surface of the painting, often mixing into and interfering with the bold, lucent brushy grounds of color that surround them. They read like small efforts in the face of inevitability, the subtle studied gestures of a lost conversation.

In the painting “Great Intentions,” color is allowed to mix and flow unlike anything we’ve seen from her before. There is a passage near the center of the painting where a brilliant area of deep blue slides into a section of burnt orange. With a few sleepy movements of her brush, Belag again summons pure visual pleasure, like watching cigarette smoke roll lazily through the air. All this is to say that the artist has figured a way out of her own common territory without seeming studied or fake. She’s pushed herself into a new location where the old familiars have fallen away. There’s no grid to guide us now, so we’re left to wander, lost in her hazy, saturated world. It’s a place I don’t mind being, and one that feels strangely at home.

Andrea Belag: Under the Pergola

The selection in this show of works on paper, which are preparatory to the artist’s larger and brushier paintings, offers a view through a transitory portal of literalness. One that dissipates as the canvas paintings grow in scale towards their exuberant and liberated abstraction. It’s a focused presentation of five gouaches and a monoprint in an intimate setting—allowing a refreshing and rare chance to appreciate an artist’s working process and the individual characteristics of different media within a practice.