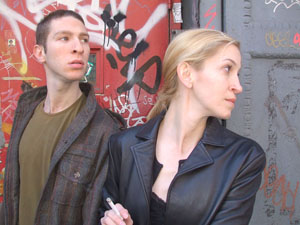 “Eastern Europeans have been too busy with dramatic living to worry about dramatic writing,” explains playwright Saviana Stanescu. Perhaps it is for this reason that, in the past, others stepped in. Romanian dictator Nicolae Ceausescu and his wife Elena were executed on national television on Christmas Day, 1989. By March of 1990, famed British dramatist Caryl Churchill was in Bucharest, working on a new play about the Romanian Revolution.

Churchill brought director Mark Wing-Davey, and ten of Davey’s acting students from the London School of Drama to Romania’s capital and spent little more than a week there, interviewing Romanians for the text of Churchill’s play, Mad Forest. Two months later, the play was in production.

Arguably the most prominent playwright to emerge from Romania since the Revolution, Saviana Stanescu is only now premiering her play about Post-Iron Curtain Romania and the American dream, Waxing West. “It took me 15 years to process this trauma, but now I have a sense of mission. I need to tell this story.” An established journalist and playwright in Romania, Saviana moved to New York on a Fulbright grant in late August 2001. The irony of leaving her country, which was plagued with violence, to move to downtown Manhattan just before September 11th does not escape Saviana. Her tragi-comedy about an immigrant caught between two cultures weaves together images of the fall of Ceausescu with the fall of the Twin Towers, depicting how living through trauma connects people on a deeper level.

Produced by Richard Schechner’s East Coast Artists, Waxing West premiers at La Mama E.T.C. this month. It then goes on to a production in Romania as part of the Sibiu International Theatre Festival, but Saviana says that she wrote this play “for the Americans.” She is unsure how the play will be received in Eastern Europe, remembering that many Romanians hated Mad Forest, perhaps because they couldn’t stand to see a mirror held up so close to their recent history. Saviana feels that she can trust the New York audience, and for good reason, as the BareBones Production of Waxing West sold out at the Lark Play Development Center a couple of years ago. The playwright notes that there is a great deal of curiosity in New York with regards to international projects. Saviana has fostered this interest not only through her writing, but also through her role as Director of International Exchange at the Lark and as a Theatre Communications Group Fellow in the New Generations Program.

Last year, Saviana brought a group of American playwrights, including Kelly Stuart, Tanya Barfield, and Tony/Pulitzer winner Doug Wright, to work with the Odeon theater in Bucharest. In addition to attending workshops and seeing plays in the capital city, each U.S. playwright was paired with a Romanian playwright to create, develop and refine an English translation of one of his or her plays. The goal of the American-Romanian Theatre Exchange (ARTE) was not to create a relationship between the east and the west based on cultural tourism, but to promote an equal exchange of ideas and experiences, particularly about the role of theater in international diplomacy. ARTE aims to extend the Lark’s ambitions in the U.S. to its Romanian counterparts: “to help artists of different cultures communicate and create strong work that is accessible to diverse audiences.” As the Romanian theater culture places an emphasis on directing, Saviana believes that Americans can specifically help to establish the role and status of playwriting there.

And what can American writers learn from Romanians? To our own chagrin, it may be a sharper sense of humor—although Saviana might not say that outright. She recalls being surprised that American people were afraid to laugh at death and war. “In the Balkans there’s a different sense of dealing. We survive with humor. The spirit is different here in America. Emotions are manifested—such as pain with tears. It’s more connected, and in a way, I like that in daily life. We, as artists, ought to go beyond that.” Saviana’s play is a perfect example of the subversion of pain with jokes, parody, and irony. Even the ruthless dictators, Nicolae and Elena Ceasescu, are presented with a heaping dose of satire; they have become vampires since their execution in 1989 and are in New York, “sucking capitalist blood in a socialist, democratic way.” In spite of tackling weighty issues such as dislocation and collective trauma, the play is quite funny. For a taste of Saviana’s humor, enjoy the puns in the full title of her play about a Romanian cosmetologist—Waxing West: A Hairy Tale in Two Acts and Four Seasons.

One of the great advantages to a global artist movement is the cross-pollination of artistic styles. Saviana, for example, wrote strictly absurdist plays until she relocated to America and found that her work had changed. By writing more realist plays, Saviana feels that she is able to delve deeper. There are still absurdist, if not surrealist, moments in Waxing West—evidence that Saviana has been able to mix her aesthetics in this play that traverses two continents. Some sort of transformation is inevitable even for an established writer when learning and using a new language. She thinks of English as, “A paradise of many meanings with so many verbs to play with. It was difficult at first, but I lived in it, conquered it, and was seduced by it.”

Melding her love of language with her determination to give back to her native country, Saviana hopes to run a contemporary drama center in Romania one day— in order to encourage script-based drama and to emulate the American new play development process. Until then, she has the second half of the American-Romanian Theatre Exchange to look forward to. The Romanian playwrights in the program will travel to New York this year for a residency with the Lark where they will attend rehearsals of their plays and ultimately see their work performed before American audiences.

From Waxing West, by Saviana Stanescu

DANIELA: …Dammit, this is gonna be difficult! You don’t have the references to our complicated Romanian Dacian Tracian Roman Ottoman Byzantine Balkan communist post-communist anti-communist pro-American history, all you know about us is Dracula-the-vampire, Ceausescu-the-dictator and Nadia Comaneci, the gymnast! Anyway, Nadia is cool, she never comes into my dreams with her perfectly fit body, so forget about her, she’s not in this story. I have more important, heavier, issues on my mind! Stuff like Life and Death. No time to worry about my cellulite. Unless a bullet stops by IN it…

Cristina Pippa is a playwright who no longer lives in Brooklyn, but in Buffalo, where she teaches at Buffalo State College and is an Artist in Residence at the Center for the Arts.

“I’m always reaching for transcendence. I feel like that’s as good a goal as any for music making and as good a reason as any for any human activity, really. How do we get outside of ourselves and how do we connect with each other in that outside-of-ourselves place?” Anderson asked.

Alexandre Koberidze’s What Do We See When We Look at the Sky?

The two features that the Berlin-based Georgian filmmaker Alexandre Koberidze has completed at the German Film and Television Academy Berlin (DFFB) are at once overflowing and miniature.

Rail Editor-at-Large, Dan Cameron, talks with Paul McCarthy about the trajectory of performance art, his interest in television as a medium, and his current collaboration with Lilith Stangenberg.