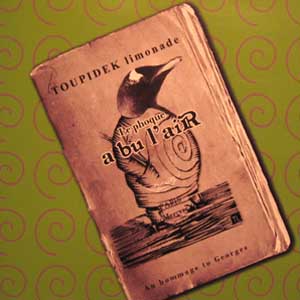 Not too long ago, the concept of “French rock” was pretty much treated as a joke. This may have changed as ye-ye girls and Gallic electronica gained hipster credibility, but much of the really interesting French rock is still largely unknown. France didn’t produce much in the way of noteworthy rock in the sixties, but through some mysterious alchemical process, the country was teeming with innovative and sophisticated prog- and avant-rock bands in the early seventies. (None of them were “famous” even in France—they were part of an underground scene that could be compared to the krautrock of Can or Faust.) These groups drew on the more adventurous Anglo-American rock bands—such as the Mothers of Invention, Soft Machine, Captain Beefheart, and Henry Cow—as well as classical music (from Orff to Satie) and jazz. In the eighties, a wave of French groups influenced by the Residents developed a unique brand of postpunk.

The French trio Toupidek Limonade—whose new album is only their third in twenty-three years—has deep roots in this alternate musical history. The band formed in 1984 as an offshoot of Hellebore, an avant-garde prog group (or, to use Toupidek Limonade’s own description, a “neo-Neanderthal-fore-contemporary-chrono-post-prog-band”). Hellebore had been around since 1978, and sounded like a cross between Henry Cow and King Crimson—but with much more emphasis on atmosphere than pyrotechnics. Toupidek Limonade consists of two former Hellebore members—Jean Caël (bass, guitar, keyboards, vocals) and Denis Tagu (keyboards, accordion, percussion, vocals)—plus female vocalist Kwettap Ieuw (who some sources claim is Norwegian—though I’m not buying it). At the same time that they formed that group, Tagu and Ieuw put together another trio, called Look de Bouk, with Etienne Himalaya (formerly of Germain Hubert Alles and the founder of the pivotal French label AYAA). Both trios exist to this day and despite the overlap in personnel sound distinct from each other—and from Hellebore.

In place of Hellebore’s instrumental prog, Toupidek Limonade developed a surrealistic, deliberately childlike, and “pataphysical” approach—something like a mix of Erik Satie, Robert Wyatt, and the Residents. (Some clue to their sound can also be gleaned from periodic brief quotations or passages “in the style of” various kindred spirits: Ennio Morricone, Fred Frith, Robert Wyatt.) Toupidek Limonade’s sound is certainly spiritually connected to the music of better-known countryman Pascal Comelade—he of the toy instruments—but is more diverse and has more heft and bite. Part of what gives Toupidek Limonade’s new album a certain weight and gravitas—as well as a connection to Hellebore’s prog-rockisms—is Jean Caël’s bass, which is massive-sounding and heavily fuzzed out, à la Hugh Hopper of Soft Machine.

Le Phoque a bu l’air is very rich and deep not only because it was recorded slowly and carefully over a ten-year period (1996–2006), but because it integrates so many strands and moods, so seamlessly. A single track can move abruptly from cheerful, singsong ditties to blasts of discordant guitar—yet it all makes emotional sense, in its own surreal way. Toupidek Limonade’s music is at once playful and solemn, lyrical and discordant. The French-language lyrics are also surreal and playful, and full of puns—translating them accurately would probably prove impossible (the CD provides a link to a Web site offering translations—but these have yet to appear). Le Phoque is dedicated to Georges Perec, the French experimental author and Oulipo member, and in some manner I wouldn’t pretend to understand, the lyrics (or at least the song titles) trace his “adventures”: “Georges Was Not Invited,” “Don’t Be Upset Georges!” “Little Red Hunting Georges Hit the Bomb,” “Georges Is Getting (C)old,” and so on.

Another connecting strand is the “tribal” percussion and chanting that pops up repeatedly, sometimes along with natural and animal sounds—a French analogue to the faux-tribalism of the Residents’ Eskimo, except that in place of the North Pole, Toupidek Limonade have substituted Greenland. This is the music of a purely imaginary primitive culture. (Toupidek is the term for small totemic whalebone sculptures of sea monsters that were traditionally carved in Greenland.)

Part of what gives Le Phoque a bu l’air deep roots in the French underground, aside from the cross-fertilization of two of the scene’s principal styles, is the presence of two mainstays of creative French rock, both of whose careers can be traced back to the seventies: Dominique Grimaud (formerly of Video Aventures) and Pierre Bastien. The American wing of the ’pataphysical school of music is represented by another guest, David Willey of Hamster Theater. (Not to shortchange them, the other guests on the disc are Jeanne Christensen and the French duo Juicy Panic.)

While Toupidek Limonade has been around for almost a quarter century, their music is so far out of the mainstream that it has not dated at all. Le Phoque a bu l’air makes a wonderful introduction to a sadly ignored musical history.

To interpolate an old line about sports, fans hear with their hearts. Hopper is a critic who, like all of us, is originally a fan, and that delineating is often hazy and, in the space of this book, self-contradictory—not in the way that happens to us all, having an opinion about a thing and then later changing our minds, but in terms of values.

These collages use the multiple interpretations and histories of the stitch to explore masculinity, sexuality, and marginal identities. In a moment when conversations around the policing of Black bodies in public space continue to grow and gain momentum, Montes-Michie’s quiet scenes of interiority dramatically change the context.