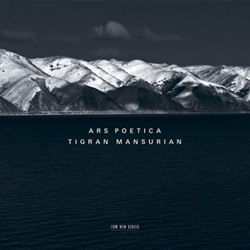 Before ECM began releasing Tigran Mansurian’s music in 2003, the Armenian composer’s finely etched, mid-period chamber music might be found on the U.K.’s Megadisc, with violin and cello concertos dating back to the seventies on the German label Orfeo. Then there was the pared, startling score for Sergei Paradjanov’s 1969 feast of cinematic poetry, The Color of Pomegranates. With last year’s a cappella choral masterwork Ars Poetica, recorded in the sonorous Saghmosavank monastery, a transformation had come full pass, with sterling recent chamber pieces joining new recordings of the violin concerto’s haunting themes and of arch string quartets, all composed in the early eighties.

The second of Poetica’s “Three Autumn Songs,” “Japanese Tankas,” dawns with hushed female voices and then adds bleak ballast with the male voices, welling to a naked momentous peak and a wisp of a protracted unison exit, with that gentle, steely bravura echoed to conclude “And Silence Descends,” the work’s thirteen-minute denouement. Poetica sets to music the once-banned verse of Yeghishe Charents, the Stalin-era casualty who “brought the rhythmical privileges of Western poetry in to the philosophies of Eastern poetry,” the composer said through a translator from Los Angeles. Preparations were underway there for an ambitious late April festival of his music including Poetica and the concerto “…and then I was in time again,” written for violist Kim Kashkashian and inspired by Quentin Compson from Faulkner’s The Sound and the Fury.

Hayren, the first of ECM’s four Mansurian offerings, was released under Kashkashian’s name. Titled for the centuries-old Armenian poetic style, it exhibits the renowned violist’s penetrating accuracy of pitch and immensity of feel, teamed with Mansurian and the incisive percussion battery of Robin Schulkowsky on the composer’s transcriptions from songs of Komitas, the choirmaster and musicologist who notated folk traditions that might otherwise have been extinguished in the 1915–17 Armenian genocide, and whose work garnered praise from Debussy. Mansurian’s quavering voice wends a beleaguered labor of love; by the time he reaches the delicately honed “Hoy, Nazan” and “Tsirani Tsar,” the project could sound like the aural equivalent of eyeing indecipherable ancient glyphs—or could resound with a noble, lingering mystique. By bracketing Komitas’s gems with adventuresome duets for Kashkashian and Schulkowsky, Hayren displays Mansurian’s remarkable range: Armenian cultural depths and the synthesis, in his late-sixties, of a lauded Soviet-system artist who has achieved the latitude and collaborative firepower to be generating his most essential music.

In speaking of Hayren’s Komitas songs, Mansurian suggested that bridge between contemporary musical concerns and traditions from the mountainous, transcontinental land between the Black and Caspian seas: “Those songs are from a thousand years ago, when they had no idea of notation or measures. It’s important that anybody dealing with that music not just work with notes and measures, but rather work to feel the freedom of the sound, which is very fragile, and can collapse. This is most important in our relationship to music: to feel the freedom [that comes] from the sounds.” And Poetica, composed through the late 1990s to Charents’ impassioned, harrowing poems, provides another window into Mansurian’s sound world: the musical emissions of words. Armenian, an Indo-European language that is one of the world’s oldest, resounds with consonant combinations, and the composer’s favorite poet “revitalized its internal breathing that had been forgotten. He brought all these different tonalities from the same letters back in—to give an example, the letter g has three different tones [each of which Mansurian demonstrated, via long distance]. What attracted me was that Charents went back to medieval Armenian poetry, when no poem was written without a very firm foundation. His poetry rivals those foundations, which made my job easier. He plays with the words, and I just continued playing.”

Mansurian was born in Beirut in 1939; his grandmother had escaped from the Turkish military onslaught to Aleppo, Syria, where she succumbed to malnutrition and his months-old mother was saved by an American missionary. (U.S. activists of that era were stirred by Armenia’s plight, though today’s calls compelling Turkey to acknowledge the twentieth century’s first genocide are thwarted in Congress by NATO alliances.) Mansurian’s family repatriated in what proved to be a Stalinist recruiting ploy. “I went from a French Catholic school in Beirut to a provincial mining town in 1947,” where he found himself the black sheep, he said. Within a decade, the Mansurians were in Yerevan, Armenia’s capital, and his professional life in music commenced.

While scoring The Color of Pomegranates (after being awarded first prizes in Moscow’s All-Union competitions in 1966 and ’68), his aptitude for the unconventional came to the fore. Director Paradjanov, also of Armenian heritage, had won international accolades with his stylized Ukrainian flamethrower Shadows of Forgotten Ancestors, along with scrutiny at home that would land him a five-year gulag sentence after Pomegranates. “I was thirty years old when I was hired to write music for that film,” Mansurian recalled. “[Paradjanov] was in his mid-forties, and one of the most unique people I’ve ever come across.” Available as a Kino DVD, Pomegranates evokes the life of troubadour Sayat Nova, medieval Armenia’s great voice of love and loss; Paradjanov festooned his tapestry of sumptuous, silent tableaux with Mansurian’s flurrying srings (double-reed flutes), battering drums, and chaotic kamanchas (spiked fiddles), layered into one of cinema’s sonic triumphs. “When I was scoring that movie, it had to be pure feeling; any sort of logic or meaning had to be out of it. It was some sort of energetic thing: one energy going to another energy. The music is not about the tree or the branch, it’s about the sap.”

Composed in 1985, with glasnost underway, Mansurian’s Five Bagatelles (on the Megadisc compilation) delve into tone clusters and atonal lines, and ECM’s quartet recording can suggest Shostakovich’s replete detail, though where the Russian wielded mordant wit, Mansurian’s grace rings both limpid and ominous, recalling the air of experimental mid-century piano pieces by Alan Hovhaness. Then ten years ago, “when Kim asked me to write a piece for viola, I jumped on the opportunity like a lion,” having long imagined setting The Sound and the Fury. “Faulkner’s relationship with time was where I always got my strength. A lot of my colleagues would just do the same things—their times were the Soviet times. The phrase ‘…and I was in time again…’ (from Quentin Compson’s opening line, as is The Shadow of the Sash, the title of a mid-1990s chamber work) sounds to me like a rebellious thought against time. When I say ‘time,’ I’m talking of a philosophical category, a relative category.” Citing fifth-century philosopher David Anhaght, Mansurian said “the symbol of time among the numbers is seven, which is also the symbol of virginity, and the concerto is written along the number seven, about virgin time, which is Quentin’s issue. When I wrote it, I chose viola because it is the most mystical instrument there is.”

Annual remembrance of the Armenian genocide occurs on April 24, and three Mansurian concerts highlight the L.A. commemoration. After the evening-length Ars Poetica, a night of chamber music includes Agnus Dei for clarinet, violin, cello, and piano, premiered last year in Germany, and the third string quartet. On April 25, Kim Kashkashian plays “…and then I was in time again” during an orchestral evening. In a phone interview, American-born Kashkashian recalled her introduction to Mansurian. “We were in his apartment, and he sang songs for me,” she said. “Armenia is a small country and with anyone whose name ends in ‘ian,’ as I am on their radar, they are on my radar. But there were also affinities of aesthetic and ethics when Tigran and I met, and we were both very interested in the Komitas transcriptions. We had many starting points, and that work continues.”

Last year, violist Ara Gregorian and the ensemble Concertante approached Mansurian to commission what Gregorian termed “a cross between a solo piece for each instrumentalist, and a piece for the sextet.” Gregorian began studying ECM’s releases and found Confessing with Faith, written for Kashkashian and the Hilliard Ensemble, “an unbelievable piece, in the way he used the viola as a singing and expressive voice, played against the vocal quartet.” The new work, Con Anima, was played at Merkin in late March. The second violin concerto, Four Serious Songs, premiered in Sweden in January and is to be played during the L.A. events. It is the likely centerpiece of ECM’s next release, as the label samples Mansurian’s vivid oeuvre, and documents his current work.

The U.S. premiere of Agnus Dei is April 6 at Carnegie’s Weill Recital Hall, and on May 10 the Chamber Music Society of Lincoln Center presents the New York premiere of Duo for Viola and Percussion.