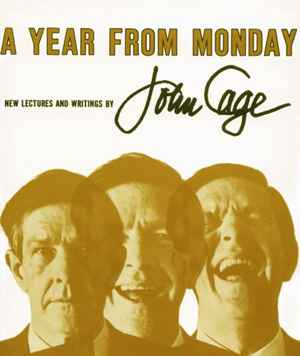 Reading through John Cage’s A Year From Monday, a collection of his essays and lectures from 1963, is a good way to test one’s inhibitions and expectations, and to question one’s own reflexive criticism. When encountering Cage’s music or art, you’re forced to reconfigure your own ways of understanding, so it’s no surprise that this book provides a similar challenge. Cage’s repetition of his own metaphors, anecdotes, and influences creates an intimate environment where confusion turns into familiarity and then into comprehension, or perhaps adoption, of his own inhibition-free approach.

The following headings of each passage cite music listened to by the author during the process of writing this essay.

As the reader traverses the book’s numerous essays, in a variety of lengths and each in its own special format (all explained in a foreword by Cage), certain ideas are encountered that carry through the rest of the book, and these recurrent themes will sometimes conflict and sometimes repeat.

Conversing in a room that had both painting and sculpture in it, and knowing as Johns does that there is a difference between them, he suddenly laughed, for he heard what he had just said (“I am not a sculptor”). I felt suddenly lost, and then speaking to me as though I were a jury, he said: “But I am a sculptor, am I not?” This remark let me find myself, but what I found myself in was an impenetrable jungle. There are evidently more persons in him than one.

Cage goes on to discuss the flag painting, which, he notes, contradicts what a flag is by taking it apart and painting it. This method of dissecting a unified object speaks to the paradox Cage presents: The object and its representation are skewed. Cage’s embrace of this tension is evidenced in the way he discusses elements of structure in composition and performance.

Cage sees the proper role of the composer and the teacher as being in conflict with their prescribed role, which he says for both “is no longer transmission of a body of useful information, but conversation, alone, together, whether in a place appointed or not in that place, whether with those concerned or those unaware of what is being said.” They can no longer do this; they cannot make the audience listen, and the setting no longer needs to be the performance hall or the classroom. The composer no longer controls the performers—the performers are free to interpret the music, and listeners are left to process what they hear on their own terms. The application of indeterminate music was crucial to Cage, and this opening of directions led him to a great appreciation of Charles Ives. Reflecting on the composer’s music, he remarks that “it made me think of the complexity of Ives and the way one perceives something in it. Does it emerge? Or do we enter in? The difference is this: Everybody hears the same thing if it emerges. Everybody hears what he alone hears if he enters in.” Ultimately it’s not about anything; you shouldn’t even need a concert hall. Relaying a story that Ives wrote, Cage notes that in a vision of the solitary listener, all you have is yourself, on a porch across great divides, the sounds of symphonies rising with the sun.

The celebration of this individual experience contrasts with Cage’s celebration of audiences and performers coming together in public, which he felt would bring about what he envisioned for the future of art and communication: “The distinction between the idea of self and other are being forgotten,” Cage declares in discussing the lack of distinction between the two brought about by global communication, along with modern art’s adoption of eastern ideas and philosophy. Cage’s tension between an Eastern and Western outlook is seen in his essay “Diary: Emma Lake Music Workshop 1965.” In it, he criticizes the significance of a young poet’s ambition for “his poetry to be useful, to improve society.” Cage proposes the question, “Will he only make matters worse?” Cage’s criticism is in opposition to his own idealism. At the same time, he imagines a great number of artists, communicating together and engaged in society, and a time where we’re no longer sitting around waiting for one poet every twenty years to speak for us.

Cage sees people connecting on a creative level in what he refers to as “happenings”—music, video, and art installation combined in a momentary experience, which also involves, by nature, the participants and the performers. From the essay “Happy New Ears”: “Just as shadows no longer destroy paintings, nor ambient sounds music, so environmental activities do not ruin a happening. They rather add to the fun of it.” The range of participants, from audience to performer, only enriches the environment in which it is set. The result of this combined energy inspired Cage to preach the idea of synergy.

Cage’s interest in synergy is related to his affection for Marshall McLuhan’s concept of the global village. Within this scheme, Cage envisioned a modernized network of communication that would provide the exchange of creative knowledge throughout the world. Thus, Cage resolved for himself the conflict between the individual and the community.

The model of the global village and the idea of real culture were eventually co-opted for the creation of superficial consumer media experiences. Cage called for an exchange of knowledge rather than a mere transmission of information. But today, information has superseded genuine comprehension in many areas, and with the new technology of global networks, culture has become increasingly individualized. Words like synergy were once used as a call to action and a path to knowledge; now they connote multi-function consumer products and the saturation of information. A Year from Monday is a reminder of what these words can mean, and a spur to look around for where they still hold court.

The Wordless Music Series is a program of performances that pair contemporary music with more traditional classical and chamber works in order to illustrate the continuity between these forms of music. Concert No. II, which took place last November and featured the ensemble A Hawk and A Hacksaw, classical pianist Steven Beck, and violinist Andrew Bird, was curated with a concern for the state of classical music. Audiences were drawn by an interest in these musicians and the opportunity to see classical and contemporary musicians performing side by side. This platform for musicians to find a new audience, as well as the opportunity for exchange with the audience, reminded me of Cage’s call for new ears. This combining of energies between classical and contemporary music illustrates a synergy of multiple musical practices.

But back to A Year from Monday: “Lecture on Commitment” is, like many of Cage’s essays, a “prepared” text. In the case of “Commitment,” he made notations on fifty-six cards, twenty-eight with text and twenty-eight with numbers (representing seconds). His original directions for reading the essay were to shuffle both stacks of cards, and then find a specific passage written on one of the cards and pair it with a numbered card. Using a stopwatch, the text was to be read in a certain length of time, which corresponded to the numbered card.

The “Commitment” essay is the strongest in the book, in that it most accurately reflects Cage’s overall ideas and the way he expresses himself. Some of the others have conflicted notions of order, and philosophy, and they can sound judgmental as a result. In “Lecture on Commitment,” Cage questions the tension between different kinds of thinkers and doers, and he invokes himself as a small winged bug: “Why was I asked to speak on commitment? Do I not resemble a grasshopper?” During one part he explains his admiration for a friend who is always changing in her course, but fully committed to whatever direction she has taken. After the friend reveals discontent with her feeling of lacking focus, Cage explains, “When she told me this I was surprised, because I thought she was committed in the first place, and because I myself feel more committed the more diverse and multiplied my interests and actions become.” In “Commitment,” all of these opposing directions are swept in, and commented on freely in a resolution of irresolution.