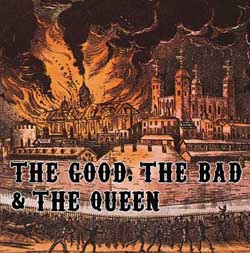 What started as a spring record-release preview has abruptly morphed into a breakdown of what’s been getting me through my post foot-surgery recuperation and inevitable late-winter cabin fever. When Dr. Rock (yes, his real name) determined that my severe arthritis and bone spurs weren’t going to vanish with positive visualization alone, I submitted to his anesthetic and scalpel and hoped for the best. With two titanium screws freshly embedded in my left metatarsal, a foot numbed by Novocain, and a mind woozy with Vicodin, I sought out something musical to wade into and lose myself in until my home confinement was lifted. The twin remedies I turned to were Menomena and the Good, the Bad and the Queen.

My hometown of Portland, Oregon, has been crawling with buzz-worthy bands in the last few years. The formula of caffeine, hops, and, precipitation seems to be good fuel for rehearsal rooms, and has worked to produce a bona fide scene. James Angell, the Dandy Warhols, the Decemberists, the Shins, the Thermals, Pink Martini, and Helio Sequence are a small sampling of the bands that have threatened to blow the lid off Stumptown lately, and now you can add the relentlessly impish indie-prog subversives Menomena to the list. Named after the tune written by Italian composer Piero Umiliani in 1968 (and later made famous by the Muppets), the moniker sets the tone for the gear-shifting pop music that this band churns out. They have given me the jolt I’ve needed to make the frequent journey from my bed to the medicine cabinet.

Their new album Friend and Foe (Barsuk) is so teeming with musical ideas and intricate changes that it’s difficult to keep up with at times. The journey through this album can be emotionally jarring, but it’s exhilarating and certainly worth the effort. A cross between Sufjan Stevens, Morphine, the Flaming Lips, and Peter Gabriel–era Genesis, with a dash of controlled chaos thrown in, Menomena’s music is a Pandora’s box of styles and rhythms. It has the outward appearance of large-scale arty humor, but when you peel back the exceptionally detailed packaging by Portland artist Craig Thompson (a good reason not to buy or copy the album via download), and deflect the barrage of syncopated frenzy in the music itself, you will find a band that isn’t selling the funny. As with their forefathers, the Flaming Lips, the overall sound is a collision of levity and sincerity that ultimately boils down to solid songwriting and musicianship. Menomena’s songs, however, delve more into the strange and troubling behavior of people than the wacky world of robots. “It’s hard to take risks—with a pessimist,” they exclaim on “Wet and Rusting.” This is a record that takes plenty of them.

The recording techniques employed by the band are well known in the world of production-obsessed indie-rock aficionados. Guitarist, keyboardist, vocalist, and Dartmouth grad Brent Knopf wrote a looping program that has been the basis of their recording method since their first album, I Am the Fun Blame Monster (an anagram of “the first Menomena album”). The Deeler program allows them to record individual sounds with a mic, get it looping, then move that mic to another instrument, layering the sound as they go. (It’s a similar technique to the one that Jon Brion often employs during live performances, allowing him to be a true one-man band.) Menomena go on constructing their songs in this manner without actually learning how to play them in their entirety as a group. They complete the record in the studio and then essentially figure out how to play it together in order to tour. At that point, with the finely detailed pop structures resulting in multi-layered, complicated compositions, they have to figure out what to peel away from the mix in order to be able to hit the road as a trio.

Menomena make heavily drum-based music that uses the piano more as a rhythmic device than as an accompaniment instrument. The influence of Flaming Lips drummer Steven Drozd on the 6’8” Danny Seim is apparent, and something that Seim readily admits. His hard-hitting, anthemic pounding and tight, machine-gun fills propel the band throughout the album and deliver a massive energy boost in concert. The songs on Friend and Foe ricochet from the fevered pop tune to the emotionally weighted semi-epic, from the herky-jerky to the straight-ahead. With three singers (Seim, Knopf, and bassist Justin Harris) and a stockpile of equipment at the band’s disposal, every song takes on its own personality. Standout tracks include the indignant stomp of “The Pelican”; the up-tempo “Weird,” a surrender to someone who endlessly basks in their own wisdom and wit; the squawking horns and piano that address “the people of the future” in “Air Raid”; and the epic whistle march of “Boyscoutin’.”

With production from the maverick Danger Mouse (Gnarls Barkley, Gorillaz, The Grey Album), The Good, the Bad and the Queen is the latest project from the perennial collaborator Damon Albarn, and has proven to be the kind of trance-inducing dub rock I needed to uncoil my nerves after a lengthy day of ice bags and cane-negotiation. This is not to call it inspirational per se, but rather an album of strangely transporting songs that buzz, float, and cruise their way through the modern landscape. “Drink all day—coz the country is at war,” Albarn sings on the track “Kingdom of Doom,” which goes a long way to indicate the current state of England, as he sees it. Fortunately for us, he has created a hypnotically cinematic album to illustrate his point. It’s a record that’s drenched in a foreboding atmosphere that reveals an England that’s found itself tethered to a “new world order” for better and worse.

A central figure in the mid-nineties Britpop movement, Albarn has leapt from project to project since the dissolution of his first band, Blur. After musical excursions to Mali and a successful second career with Gorillaz, he has now assembled a certifiable supergroup and created an album that makes me hope he can resist his wanderlust and stick with these guys for a while. The unimpeachable lineup of this band brings a presence to the music that is unmistakable and weighty. With Albarn on vocals and piano, along with ex-Verve guitarist Simon Tong, this collection of gloomily catchy songs has at its foundation one of the finest rhythm sections ever assembled: Paul Simonon of the Clash and Afrobeat pioneer Tony Allen of Fela Kuti fame, who at age sixty-six still demonstrates the energy and innovation that has influenced the likes of Stewart Copeland and helps keep this record from sinking into the mire of melancholy.

The Good, the Bad and the Queen (Parlophone/Virgin) grooves and bleeps with a contemporary world-weariness. It rolls through the pulsing fog of late-night London with a measure of wistful defiance. The head-nodding pace is steady and relentless in places (particularly on the songs “Herculean,” “Northern Whale,” and “Three Changes”) without forcing the issue, and the tracks know when to fade out for maximum effect. There are elegiac ballads (“Green Fields,” “History Song”) that creep along before swelling into a gospel fervor. This is the kind of music you might hear in somebody’s dimly lit flat, coming down from a long evening of chasing some kind of elusive promise, blowing smoke rings at the ceiling, waiting for the kettle. “Well, the medicine man here 24/7—you can get it fast in Armageddon,” Albarn sings on “Herculean.” The atmosphere created by Danger Mouse doesn’t hang above the proceedings as much as it simmers and hums and pushes up from below. The Good, the Bad and the Queen is not a record of resignation but a reformulation of expectations in contemporary England to the dub beat of Simonon’s “Guns of Brixton”-esque bass lines. (Hearing that familiar low-end throb is one of the album’s undeniable thrills.) Perhaps it was the Vicodin, but this record has a hazy, dreamy quality that delivers the listener to an ominous time and place where “ravens fly across the moon” and whales get inexplicably lost in the Thames.

Adam Pendleton: Who is Queen?

Stand still and direct your gaze three stories up into the MoMA’s Marron Family Atrium and prepare to be arrested by the motif of black-and-white in Adam Pendleton’s Who is Queen? The work, monumental in scale, with its three soaring scaffold sculptures, taking up the height of the 60-foot atrium, is his most “autobiographical” to date and considers history not as fixed or static, but rather continuous, alive, and ever-evolving in real time.

It started on a sunny day on a rooftop in Ebute Metta, after he impulsively went out to get a ten-foot-tall mirror. In front of it, he swayed from right to left, his arms outstretched, and posed; then he stood at attention, clamped both arms by the hips and posed; squatted and posed; pursed his lips and posed.

Paul Pagk, a British-American-French artist based in New York, demonstrates his mastery of color and painting. His first solo exhibition with the gallery in Lower Manhattan was on view until July 9, 2022, at Hionas Gallery.

The last time Judith Baumel and I engaged in conversation via the Brooklyn Rail was February 2020, during the before times. When Covid took over, life seemed to be in the breakdown lane, but that didn’t stop Baumel. She geared up an eclectic group of scholars and writers and artists for weekly Zoom conversations focused on the classics and, line by line, they made their way through Dante's Divine Comedy and are now halfway through Ovid's Metamorphoses.