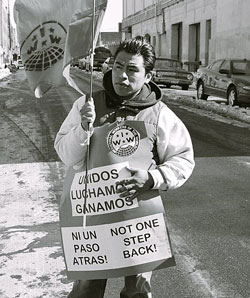 March for Immigrant Workers Rights, February 19, 2007. Photo courtesy of IWW and Make the Road by Walking.

In 1903, when Japanese and Mexican immigrant workers wanted to unionize in California, the American Federation of Labor denied them a union charter, refusing to work with non-whites. The Industrial Workers of the World, on the other hand, embraced workers of all colors, as long as they were a little “red.” At less than $4 an hour, some Mexican workers in Brooklyn today earn little more than they would have in 1903—and these workers are again turning to the IWW.

On March 10, in the sparsely inhabited industrial graveyard that straddles the borough divide between Brooklyn and Queens, 15 to 20 people picketed outside EZ-Supply/Sunrise Plus, a food distribution warehouse, to protest labor abuses. EZ-Supply/Sunrise Plus employs about 25 workers and is the largest of five food distribution warehouses in the area where workers are trying to unionize. The others—Amersino, Giant Big Apple Beer, Top City and Handyfat—employ about 65 workers total.

IWW organizer and do-rag bestyled Billy Randel explains that the point of the small picket, far from the eyes of the public, is to remind the owner, one Mr. Lester Wen, that he is being watched. Randel elaborates, “This warehouse is really bad. It’s one of the worst. When we first came in here about a year ago, workers were working 60 to 70 hours for around $350 a week.”

José Vaquero, a Mexican laborer in his 50s, says he made even less than that at Handyfat, a nearby warehouse in Brooklyn. Vaquero was employed at the warehouse for 12 years before allegedly being fired for his involvement in the IWW. “I was making about $280 a week, working about 60 hours. And the work was physically exhausting.”

Bert Picard, an IWW organizer, said the firing of Vaquero was “gratuitously evil.” He recounts, “After José was fired, he picketed in front of the warehouse with six other guys and Dennis Ho (the owner) called the cops. Six cars came and Ho insisted that the picketers were illegal and tried to get the cops to deport them. That’s just kicking a man in the teeth when he’s down.”

In June of 2005, immigrant laborers from Brooklyn warehouse Amersino approached the community group, Make the Road by Walking, and together they filed a Department of Labor back wage claim requesting compensation for hours worked at below minimum wage and unpaid overtime. Juan Antonio Rodriguez, 23, was one of those laborers. “We went to a (Make the Road by Walking) meeting because we knew the general labor laws of this country and we knew that (Amersino) was breaking them.”

Rodriguez and others met Billy Randel and Bert Picard at the Make the Road meeting, and together they started to unionize workers at Amersino. The movement grew and four other warehouses joined the effort. There are currently about 50 laborers throughout the five warehouses involved in the union.

When Rodriguez started working at Amersino a year and a half ago, he was paid approximately $4 an hour. He usually worked from 5:30 am to 5:30 pm and if he was five or 10 minutes late, he was penalized a $5-10 fee. There were no schedules, no job security, no vacations, no sick days, and no overtime.

Rodriguez says he was fired for joining the IWW in an attempt by the owner to discourage union activity. After he and five others were fired, the IWW filed a complaint against Amersino with the National Labor Relations Board. Almost a year later, on March 7, 2006, the NLRB ordered Amersino owner, Henry Wang, to reinstate Rodriguez and pay thousands of dollars in back wages.

Pedro Campos, 28, was an employee at Handyfat for seven out of the last ten years, until he was fired three months ago. Before workers started unionizing, he was paid $270 a week for 60 hours of labor. “Conditions were bad,” he says, “They yelled at us and said horrible racist things. We didn’t have vacations, we didn’t have sick days and they paid us less than minimum wage. We worked very hard there, moving one-hundred pound cargoes of rice and soy sauce.”

In December, Handyfat owner, Dennis Ho, locked out his employees and demanded they submit I-9 employment eligibility forms. I-9 forms are supposed to be submitted within 72-hours of hire. The fact that Ho did not ask for the I-9 forms until, in some cases, a decade after hire suggests he was using the employment eligibility forms as an intimidation tactic to discourage undocumented workers from unionizing.

“Even though employees don’t always have proper papers, they aren’t afraid of unionizing,” says Campos. “We want respect.”

This kind of treatment is far from rare. A new report released in December 2006 by the Brennan Center for Justice at NYU estimates that 13% of all New York City workers were paid below minimum wage in 2005. The report continues: “Half of day laborers surveyed in 2003 experienced non-payment of wages—that is, they were not paid at all.”

Says IWW organizer Bert Picard, “$4 an hour is the norm. Vacation and paid holidays don’t exist. It’s flagrant. It’s like, law? What law? The Department of Labor certainly doesn’t enforce the laws. We bring these cases to the Department of Labor on a silver platter and they sit on them for a year. If there’s no union behind them, the workers get ignored, and the owners know that. They have complete impunity…EZ-Supply workers were in the dark (as to the status of their case) for a year. And then (the workers) called up and found out that the owner had settled over six months ago and was supposed to pay them back wages.”

“People are used to it. It is what we have come to expect,” Rodriguez concurs.

Picard explains that warehouses often illegally pay employees by the week, instead of by the hour, thereby forcing workers to work unlimited and indefinite hours. “If they don’t finish a delivery, they won’t have a job tomorrow. So they stay late and finish the delivery.”

The Brennan Center report states that, “While New York’s economy has changed the (Department of Labor’s) strategies and resources have failed to keep pace.” The report explains that the Department of Labor “has insufficient investigators to address a tremendous backlog of individual complaints—it has approximately 120 investigators on board, compared to more than eight million workers in the state.”

Robert M. Lillpopp, spokesman for the Department of Labor, responded by saying, “We continue to be as aggressive as possible when we pursue violations. When we get tips, we investigate.” In fact, the Department of Labor has collected more back wages in recent years than in the past. The New York Times reported that over $10 million were collected in back wages in 2005, a figure 36% greater than the year before. Although clearly an improvement from 2004, many say it is still not enough. Picard estimates that the five warehouses alone owe millions in back wages.

Just how common are immigrant unions? According to the AFL-CIO President John Sweeny, only about 13% of all workers in the U.S., including immigrants, are unionized. And while the National Labor Relations Act was passed in 1936 to protect unionizing workers from being fired, the AFL-CIO estimates that about a third of organizing campaigns result in the dismissal of those involved. Businesses today are doing their best to prevent workers from unionizing—and for undocumented immigrants with a lot to lose, the risks of forming a union are sometimes too severe.

“The people who work (at Amersino) have a little bit of fear about organizing,” says Rodriguez. “They have families to support so they need to work. They don’t want to be fired but they want things to get better. It’s not so easy to find good work in this country.”

Yet another obstacle to unionizing efforts, Picard postulates, is the possibility that the warehouse owners have formed their own organization. “Now, this is complete conjecture,” he qualifies, “but I think there is an owners’ association or some group that convinced EZ-Supply that they couldn’t recognize the union because it will hurt business across the board if they do.”

Picard says that EZ-Supply/Sunrise Plus was ready to negotiate with IWW before abruptly going back on its word. The union fought back by striking and convincing restaurants to buy from other warehouses, but to no avail. “It just doesn’t make sense. (Wen) is losing money. Who’s compensating him? Who’s paying him? We feel there is something happening on a larger scale and the Department of Labor doesn’t want to deal with this.”

As the first warehouse to unionize, Handyfat workers saw some early successes. Six employees joined the union and entered into constructive dialog with the owner, Dennis Ho. In January 2006, Handyfat agreed to pay workers fair wages and require fewer hours. Although this initial goodwill did not last, Joel, a longtime Handyfat employee, got his first paid vacation in 12 years, which he took immediately.

In November 2006, EZ-Supply/Sunrise Plus owner Lester Wen agreed to recognize the union as well, and negotiated with the IWW for improved conditions. But one month later, Wen recanted and stepped up threats against union members. He fired 13 workers after the IWW served him with a federal complaint. Handyfat was also served papers and subsequently fired any employees suspected of unionizing.

Workers at the five warehouses are in the throes of a potentially historic moment. They follow in the footsteps of Starbucks workers who have also unionized with the IWW in New York City. Picard reflects, “This is part of a larger movement. People are unionizing all over. There are worker centers across the country. But it’s hard not to lose faith sometimes. I think this thing has to grow more before it starts to have an impact. And the Labor Board system is broken.”

“We, the IWW, are interested in rekindling an institutional presence,” he says. “I blame the other labor unions for letting it get to this point. We were so busy protecting what we have that we didn’t notice how bad things were getting. My wife and I worked in a factory in the 70s. We had a health care plan. We had vacation time and sick days. We considered it a sweatshop at the time, but we had benefits and only paid $100 a month in rent. If anyone had told me then that labor would get this bad, that people would be working 60-plus hours a week making $4 an hour paying $1200 a month in rent, I would have said you were crazy. What’s next? Working 16 hours a day for $2 an hour?”

While transgressive sexuality holds currency and appeal within contemporary art milieus, its execution can come at the exclusion or fetishization of sex workers.

In an age that sees allegations of forced sterilizations of immigrant women at a Georgia detention center, and a de facto medical experimentation being visited upon essential workers who are forced to work in this pandemic without adequate safety gear, McMillian offers us a devastating message and reminder.

Social Poetics, “contains a history of the contemporary working class: booksellers, Amazon warehouse workers … Powell’s staff, paper mill workers […] editors and copyeditors […] janitors and ‘nightshift mothers’ who clean all these office spaces … .” The list goes on, soon enough reaching the book in our own hands. Every line seems soaked with the sweat of labor. If a creative writing text ever raised a call to the barricades, it’s this one.