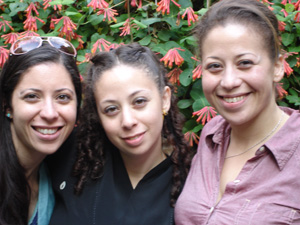 Nasreen Alkhateeb, an Iraqi-American filmmaker, sculptor, photographer and painter, describes herself as a constant outsider. “My culture is my own,” she says on her website, www.littlemongrel.com. “I’m not quite Middle Eastern, not quite American.”

That feeling is underscored in Alkhateeb’s first documentary film, Reaching for Modesty, when she recounts what it was like to wear a hi-jab—the traditional Muslim head covering for women—to school for the first time. She was 10 and her teacher not only pulled on the garment, but demanded that she tell the class why she was wearing it.

“She was challenging me,” Alkhateed says in the film. “I felt helpless, like no one understood what I was doing.”

Reaching for Modesty, is a 15-minute look at the decision to wear—or not wear—the hi-jab. It has been screened by Muslim women’s groups and has been submitted to numerous festivals and competitions.

The film was made last year, when Alkhateeb was a senior at Pratt Institute, and graphically describes the animosity she encountered when wearing the hi-jab. Despite its brevity, it is structured as a conversation between Alkhateeb and her two older sisters, Layla and Maha. Although none of the three are presently muhajibah—covered—they are supportive of those who wear the hi-jab. Their reasons for opting not to, however, form the backdrop of the film.

“I want the film to encourage viewers to feel empathy for any person who dresses or looks different from the majority,” Alkhateed says, slowly sipping water at Tillie’s Café on DeKalb Avenue. “I want viewers to feel protective of those who’ve been singled out for ridicule or contempt.”

Alkhateeb was born in San Francisco in 1980 but moved to Saudi Arabia when she was three months old. Her family remained there until she was eight; Maha was 15, Layla 18, when they left. Since their mom, Muslim scholar and feminist Sharifa Alkhateeb, was U.S.-born, the girls were taught to appreciate the cultures of both America and the Middle East.

“We lived in an American compound in Saudi Arabia and our home life was split,” Alkhateeb recalls. “I watched American and Arabic cartoons and Winnie the Pooh and we spoke Arabic and English in the house.” As for the hi-jab, there was a general consensus within the country that when women went outdoors, they covered; this obligation began when girls reached puberty.

Shortly after returning to the United States in 1988, the Alkhateebs moved to Great Falls, Virginia. It seemed a logical choice: the schools were reportedly good, there was a small Muslim community, and the suburb was an easy commute to jobs in Washington, D.C.

Despite knowing English, it was not easy for Alkhateeb to enter the American mainstream. “I had no friends from second to sixth grade,” she admits. “I played by myself and stuck to my family. Wearing the hi-jab became an issue when I got my period the summer I was 10 years old. That’s when I decided to cover my hair. I figured I had no friends anyway and wanted to be connected to my mother, and she covered. But it made the barrier between me and the other students even bigger.”

Layla and Maha also experienced overt cruelty and racism when they wore the hi-jab. Maha remembers being called “rag head,” and was told “to go back home.” But most bothersome, she says in the film, were the hostile looks she received when wearing the hi-jab. “I was astonished by the hatred of total strangers. People wouldn’t smile at me when I wore it.” As soon as she removed the hi-jab, people began making eye contact, grinned at her, and treated her respectfully.

Layla’s experiences were equally brutal. “An old lady spit on me in Tyson’s Corner Mall,” she says. “During my first year in the States, I took a trip to Indiana and was chased by four white boys who tried to run me off the road.” Not surprisingly, she confesses that “it made me not want to live in this country anymore.”

Yet the Alkhateeb sisters have stayed, choosing instead to remove the hi-jab. Nasreen was the first to shed the garment. “I got to the breaking point,” she tells me. “I wanted to not worry about it anymore. I needed to find me, get on the road to me, without this attachment covering me up. So I took it off the day they took the fifth grade class picture in 1991.”

Although she knew that her decision disappointed her mother, Nasreen encountered no parental resistance. “Both of my sisters still had the hi-jab on,” she continues. “I have no memory of their reactions when I removed it. The big change was with people on the street. They no longer noticed me. I had rarely been invisible before and I could now blend into a crowd. It gave me a sense of privacy. There is something terrible about people staring at you, especially when you don’t have the opportunity to explain yourself properly.”

Within several years, Layla and Maha followed Nasreen’s example and removed the hi-jab. “They kept it on a bit longer primarily because of my mother,” Nasreen says, “because they represented her in the community.”

Layla wore the hi-jab for 11 years, from the age of 16 until she was 27. “It took me a long time to get used to the feeling that people could see my hair,” she says in the film. “I felt naked. I felt everyone was staring.”

On the flip side, adds Maha, “it’s incredibly difficult to cover yourself in the climate we live in today.” Like her sisters, she fears for the safety of muhajibah, but believes that the decision to cover should be between each individual and her God. Nonetheless, she appreciates that the decision is complicated.

While some use the hi-jab to indicate their piety, others wear it to visibly identify as Muslim. “My mom used it to demand respect from men,” Nasreen says. “When men can’t see your body, you cannot be seen as any kind of fantasy or sex object. It can put women on an even plane, mind to mind, intellect to intellect.”

For the three sisters, it’s a question of defining modesty and self-respect for oneself.

Nasreen Alkhateeb hopes that audiences will leave screenings of Reaching for Modesty understanding the impact of staring, finger-pointing or treating someone as The Other. “I want people to think twice before coming to a conclusion about someone and to be more aware of how they react to strangers. We send a message when we look at each other. That message can be full of hate or full of welcome.”

More information about Reaching for Modesty is available from Nasreen Alkhateeb’s website, www.littlemongrel.com

Organized by art writer and curator Paul Laster, An Alternative Canon: Art Dealers Collecting Outsider Art presents nearly 75 artworks collected by some 30 dealers. The range of the works, shown salon-style in Edlin’s space near the New Museum, is remarkable.